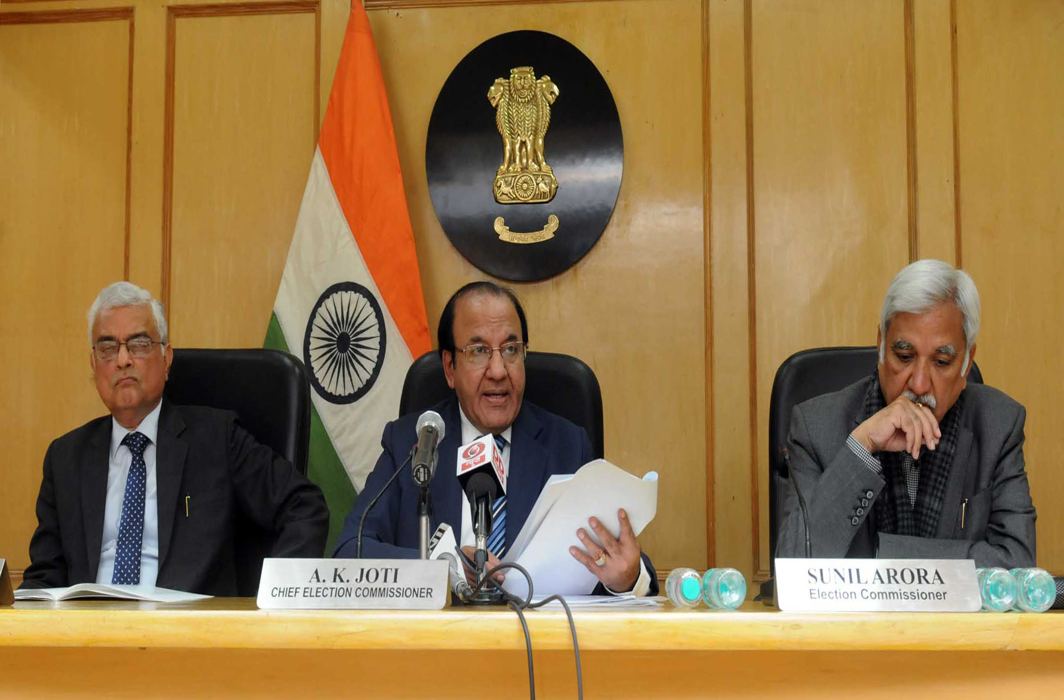 Result for the Assembly polls to the three north-eastern states to be declared on March 3, BJP eying big gains in last standing Left, Congress bastions

The Election Commission, on Thursday (January 18), announced the poll schedule for the three north-eastern states of Tripura, Nagaland and Meghalaya. While Tripura, one of the last two CPM bastions (the other being Kerala) left in the country, will go to polls on February, Nagaland and Congress-ruled Meghalaya will witness polling on February 27. The results for all three states will be announced together on March 3.

With Chief Election Commissioner AK Joti announcing the poll schedule for the three north-eastern states, the model code of conduct for elections has now come into force in these provinces.

The election to these states is likely to witness a major poll blitzkrieg by the BJP which is hoping to cash in on the continuing popularity of Prime Minister Narendra Modi and his government’s flagship schemes for development of the country’s north-eastern region to make unprecedented electoral in-roads in these poll-bound states. BJP president Amit Shah has been holding talks with leaders of various fringe groups in these conflict-torn states with an eye on forging micro-level alliances.

In Tripura, while Manik Sarkar is hoping to return to power for a fifth consecutive term – closing in on the record of another Left Front chief minister, the late Jyoti Basu of West Bengal, for becoming the longest running chief minister of a state – the BJP , has been hoping that anti-incumbency against the Left Front rule and law and order problems that have suddenly erupted in the state over the past three years would help a saffron surge in Tripura. In the 2013 assembly polls, Sarkar had led the CPI (M) to a massive fourth-term victory in the state. The CPI (M) had bagged 49 of the state’s 60 assembly seats while its ally, the CPI, had won a lone seat. The Congress was utterly decimated in the polls, winning just 10 seats while the BJP had lost on all the seats.

In Meghalaya, one of the few states left under Congress rule, chief minister Mukul Sangma’s government has been struggling to hold on to power in the face of rising defections from its camp to the BJP or the regional National People’s Party (NPP). Just last month, five Congress MLAs, including deputy chief minister Rowell Lyngdoh, had quit the party criticising the chief minister’s “autocratic style of functioning” reducing the Sangma government into a minority. The BJP is eying a strategic alliance with the NPP to oust the Congress from Meghalaya. In the last assembly polls, the Congress had won 29 of the state’s 60 provincial seats while the NPP had bagged just two seats. The BJP had failed to open its account in the hill-state while 13 independents had emerged victorious, forming the second largest block in the state assembly. A host of other regional parties had also won between one and eight assembly seats.

In Nagaland, the saffron party is exploring a revival of its old alliance with the Naga People’s Front (NPF). BJP sources suggest that Amit Shah’s emissaries have been in touch with Nagaland chief minister TR Zeliang to finalise a pre-poll alliance with the NPF, which has been ruling the state since 2003 barring a brief period in 2008 when Nagaland was under President’s Rule. In the 2013 elections to the 60-member Nagaland Assembly, the NPF had won a clear majority bagging 38 seats while the Congress managed to bag only 8. The Nationalist Congress Party (NCP) of Sharad Pawar had won four seats while BJP had won a lone seat. However, in the following year, all eight Congress MLAs had defected to the NPF while three NCP legislators joined the BJP.