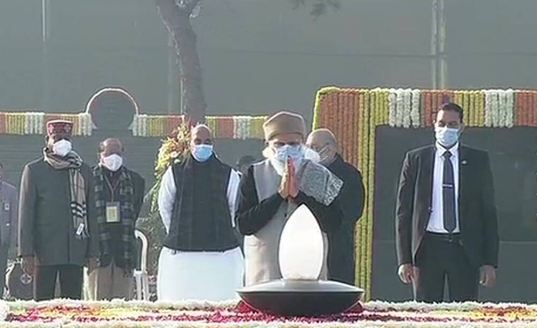 On the occasion of the 96th birth anniversary of Atal Bihari Vajpayee, incumbent Prime Minister Narendra Modi, President Ram Nath Kovind and other prominent leaders paid floral tribute to the former prime minister at his memorial in Delhi on Friday.

PM Modi tweeted that the nation reached unprecedented heights of development under Vajpayee’s vision. His efforts in building a strong and prosperous country will always be remembered, wrote Modi in Hindi.

Vajpayee was a much loved public figure, who remained connected with people whether he was in power or Opposition.During his tenure, he had a deep impact on Indian politics, said Uttar Pradesh Chief Minister Yogi Adityanath at a Kavya Sandhya organised by Atal Bihari Vajpayee Memorial Foundation.

PM Modi will also release a book titled ‘Atal Bihar Vajpayee in Parliament: A Commemorative Volume’ in Parliament on Friday to honour Vajpayee on his birth anniversary. The book highlights the life and achievements of the former prime minister, focussing on his notable speeches. Published by Lok Sabha secretariat, the book will be released at a ceremony in the Central Hall of Parliament.

Vajpayee’s birth anniversary is also celebrated as Good Governance Day in his honour. Marking the day, PM Modi will be addressing nine crore farmers to clarify the Centre’s position on three agricultural laws against which farmers have been protesting for almost a month. He will also announce the financial aid of Rs18,000 crore from the PM Kisan scheme on Friday.

The late politician was born on December 25, 1924 in Gwalior in Madhya Pradesh. He was the first from the Bharatiya Janata Party to take over the Prime Ministerial  position. He served the nation in 1996 for a year and then from 1998 to 2004. Besides being a visionary politician, Vajpayee was a prominent poet and writer. He was awarded with Bharat Ratna in 2015, and Pt Govind Ballabh Pant Award for best parliamentarian in 1994. He took his last breath on August 16, 2018.