No causalties or injuries have been reported in the incident. 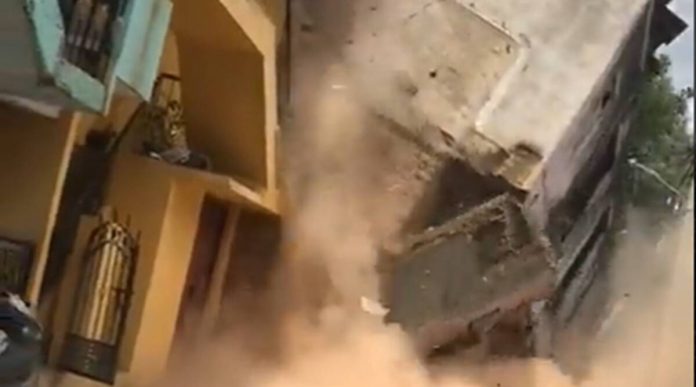 A three-storey building collapsed in Bengaluru’s Wilson Garden neighburhood on Monday at around 11.40 am. No causalties or injuries have been reported as the building occupants have contacted the emergency services and the fire department had evacuated it before the structure built in 1962-fell down.

Fortunately, most of the occupants were away at work when the building collapsed.

Local BJP MLA Uday B Garudachar said the building was unauthorized and constructed in violation of rules. Locals said that the building was slightly tilted for two years, but no civic official took care of it. They ignored our complaints about the condition of the building.

The dramatic video shows the weather-beaten two-floor house on a side street with a compound wall on the right and two other houses – a blue one and a yellow one – in front and behind.

As the 20-second video plays out, a few stray pieces of debris and plaster fall to the ground before the entire structure, suddenly and completely, collapses in on itself.

The building collapse also covered neighbouring houses in clouds of smoke, but none of them seemed to suffer any significant structural damage.

In other India news, the nightingale of Bollywood, Lata Mangeshkar is set to turn 92 on Tuesday, September 28. She is also known as Lata Didi, and she is known as one of the OG singers of the industry, who saw various ups and downs, but always managed to woo everyone with her amazing voice.