Himanshi Khurana and Asim Riaz met inside the Bigg Boss house and have been inseparable since then. 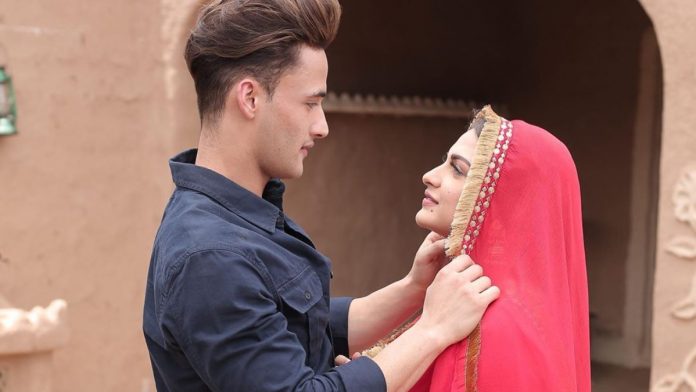 Bigg Boss 13 contestant Himanshi Khurana has fuelled engagement rumours by posting a picture of a beautiful solitaire on her Instagram story with the caption -Uiiiiii. The diamond ring is from luxurious international brand Tiffany & Co. and people are wondering if boyfriend Asim Riaz has gifted her the ring. For the uninitiated, Himanshi is a huge fan of diamonds and often gifts expensive jewellery to herself.

Himanshi Khurana and Asim Riaz met inside the Bigg Boss house and have been inseparable since then. The couple made their relationship official last year. When Khurana entered Bigg Boss, she was in a relationship with another man Chow However, the couple parted ways and Khurana started dating Riaz. Asim Riaz is often spotted at the airports to see off his lady love. He even flew to Dubai to celebrate Khurana’s birthday giving us major couple goals.

Recently, the Punjabi actor/singer was asked if she was planning to get hitched to Bigg Boss 13 runner-up, to which she replied that they were in no hurry. She added that she was surprised that people who doubted their relationship were now asking about marriage. She said they just wanted to focus on their work and be there for each other.

Khurana added that she and Riaz belong to different communities and religions and wanted to give more time to their relationship. Khurana started her career at the age of 16 with modelling. She made her debut in the Punjabi music industry with the song Jodi – Big Day Party. She has also acted in a Bollywood film titled Jeet Lengey Jahaan and six south Indian films.

Asim Riaz who came to limelight with Bigg Boss 13 is a professional model. He made quite a few headlines during his journey due to his fights with Bigg Boss 13 winner Sidharth Shukla and chemistry with Khurana.