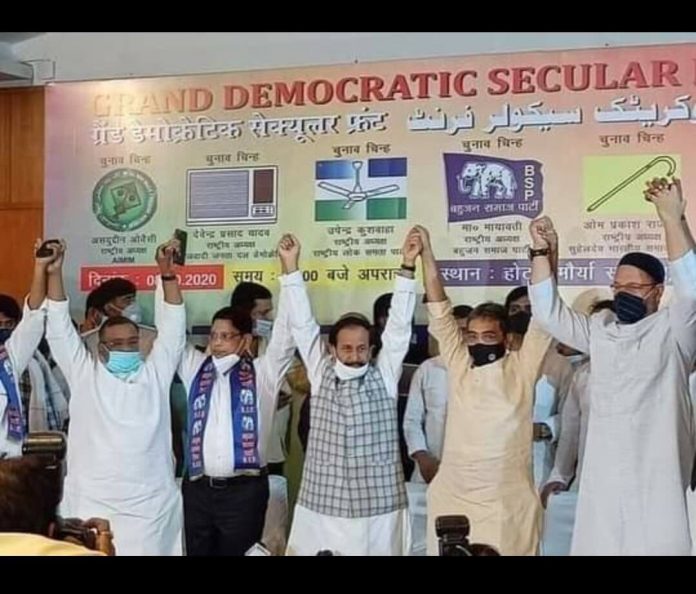 Most of India’s youth may not know of the GDR, the erstwhile German Democratic Republic, which was popularly known as East Germany, which died as the Berlin Wall collapsed around it in 1989, and it became one Germany. But Bihar’s voters will have a lot to hear about the GDSF or the Grand Democratic Secular Front of Upendra Kushwaha, the main architect and thence the CM candidate, and Asaduddin Owaisi of the All India Majlis-e-Ittehadul Muslimeen (AIMIM). The GDSF has its giant killing dreams, of topping the National Democratic Alliance or the opposition Grand Alliance, and looks like a work in progress of that old Third Front idea in the state which has the two poles of Lalu Yadav or Nitish Kumar. If it does decent in Bihar elections, the 2024 elections will be fairgame.

The other part of the development is the AIMIM’s Bihar outreach which had been rumoured for quite some time but with JDU and RJD not to keen to play Dr Frankenstein to the Owaisi-led party, it wasn’t surprising that at the first hint of a chance with Kushwaha’s discomfiture, Owaisi spotted the call.

With the Lok Janshakti Party’s Chirag Paswan not feigning embarrassment of his chief ministerial aspirations, Kushwaha has staked out his campaign this time on it. His Rashtriya Lok Samata Party (RLSP) left the Mahagathbandhan of the Rashtriya Janata Dal and the Congress and the left parties.

Owaisi addressed the presser said that he was happy that the new alliance has been able to give options to the people of Bihar and new political parties have come with us. The people of Bihar have been cheated for 15 years under the Nitish government’s rule, in such a way a new option was needed now.

Kushwaha said that there was no justification for the poor state of education in Bihar. He said that education in the state was only for the affluent and not for the poor. The people of Bihar are forced to go out of the state for employment as a result, he said. Commenting on the NDA, he pointed at the lack of unity among the partners. Kushwaha said the GDSF was ready, but the Grand Alliance and the NDA are fighting among themselves. The BJP is contesting against its partner party (JDU) through a third party (LJP), he said. The new alliance promised to fix the issue of recurrent floods in Bihar for good.

Bihar votes in three phases from October 28. The results will be out on November 10.