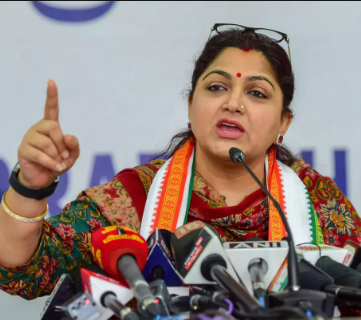 Bharatiya Janata Party (BJP) leader Khushbu Sundar was arrested by police on her way to Chidambaram in Tamil Nadu on Tuesday. The actor turned politician was on her way to participate in a protest against Viduthalai Chiruthaigal Katchi (VCK) chief Thol Thirumvalavan for his alleged remark on ancient Hindu text Manusmriti.

After her detention, Sundar on Twitter questioned the Tamil Nadu Chief Minister Edappadi K. Palaniswami, asked why her party is denied the democratic right for peaceful protest while other political parties are allowed to do the same.

In another tweet, Sundar asked if the government was scared of the VCK party’s capabilities of riots and goondaism.

The BJP leader was heading to Cuddalore district to lead protest by the party’s women’s wing when she was detained. The police officials had denied the permission for the protest in the district.

During a recent interaction with a group, Thirumvalavan demanded a ban on Manusmriti, while claiming that the religious text demeans women and the Manu Dharma treats women as prostitutes.

However, the VCK leader has denied the allegations and said that the BJP party is spreading fake news to trigger clashes, insisting that he was working for women emancipation.

Sundar had earlier demanded an apology from Thirumvalavan, and asked him to speak carefully since he was a political leader.The BJP party said the comments could trigger a communal clash.

Ahead of  the Tamil Nadu polls next year, Sundar resigned from the Congress protesting against some leaders for dictating terms and suppressing her, and joined BJP. She was a popular Tamil actor, who was with the DMK before joining Congress in 2014.