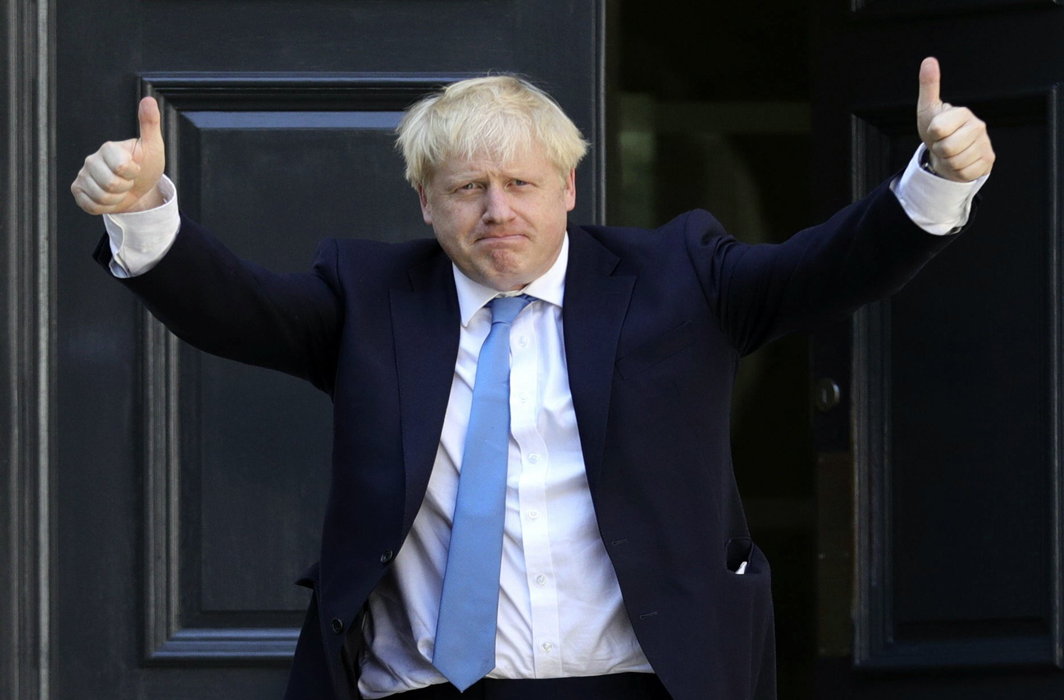 Leading votary of Britain’s exit from European Union – Brexit – Boris Johnson is set to take over from Theresa May as Prime Minister today (Wednesday, July 24).

Johnson, a former foreign secretary and London mayor, won the leadership of the Conservative Party hands down on Tuesday, securing two-thirds of votes to beat his rival beating Jeremy Hunt decisively.

“We are going to get Brexit done on October 31, and we are going to take advantage of all the opportunities it will bring in a new spirit of ‘can do’,” Johnson, 55, said after the result was announced. “Like some slumbering giant, we are going to rise and ping off the guy-ropes of self-doubt and negativity.”

This promise of delivering Brexit with or without a deal this year by October-end pushes the United Kingdom towards a showdown with the EU and towards a constitutional crisis at home, as British lawmakers have vowed to bring down any government that tries to leave the bloc without a divorce deal, said reports.

Johnson’s Conservatives have no majority in Parliament and need the support of 10 lawmakers from Northern Ireland’s Brexit-backing Democratic Unionist Party to govern.

Even then, the majority is wafer-thin — and some lawmakers have threatened to bring down the government, a step that would probably deepen Britain’s political crisis and lead to an election.

Johnson will inherit an economy that could be heading for a slowdown or even a recession, weakening his hand in the battles ahead as the country prepares to leave the European Union.

Not many in UK are optimistic about Johnson’s capabilities to deliver and recall the experience of people who worked with him, especially when he was foreign secretary. The opening sentence in an article in The Guardian read: “If Boris Johnson is the answer, what was the question?” And a headline said tellingly: “The UK is at its most combustible. And now it’s led by a man who plays with matches.” Many came up with memes likening him to US President Donald Trump.

Johnson said the mantra of his leadership campaign had been to “deliver Brexit, unite the country and defeat (Opposition Labour leader) Jeremy Corbyn — and that is what we are going to do”.

He said some wag had pointed out “deliver, unite and defeat” unfortunately spelt dud. “But they forgot the final e – ‘e’ for energise. I say for all the doubters, DUDE – we are going to energise the country and get Brexit done!” and like “some slumbering giant we will rise and ping off the guy ropes of self-doubt and negativity.”

The ex-foreign secretary will officially become prime minister on Wednesday after an appointment with the Queen at Buckingham Palace. Thereafter he will deliver his first speech outside No.10 Downing Street before announcing his Cabinet in which Indian-origin Priti Patel MP is widely expected to get a top job. PIO Tory MPs Alok Sharma and Rishi Sunak are also tipped for Cabinet positions.

“I can’t think of any other British prime minister who has had such a strong Indian connection,” commented Indian journalist Rahul Singh, the late Khushwant Singh’s son.

Johnson’s estranged barrister wife Marina Wheeler QC, 54, to whom he has been married 26 years and with whom he has four children, is half Indian and half English. Before announcing their separation last September, Johnson travelled innumerable times to India with Marina and stayed with her cousins in Delhi and Mumbai. The couple are still married but in the process of divorcing.

The victory for one of Britain’s most flamboyant politicians places an avowed Brexit supporter in charge of the government for the first time since the UK voted to leave the EU in the shock 2016 referendum.

Johnson has pledged to negotiate a new Brexit divorce deal with the EU to secure a smooth transition out of the EU before October 31. But if the bloc refuses, as it insists it will, he has promised to leave anyway — “do or die” — on the current agreed date.

It is a step that many investors and economists say would send shock waves through world markets and tip the world’s fifth largest economy into recession or even chaos. A Brexit without a divorce deal would also weaken London’s position as the pre-eminent international financial centre while jolting the northern European economy, said reports.

The EU said a no-deal Brexit would be a tragedy for both parties but said the withdrawal deal was not up for negotiation. “We look forward to working constructively with PM Johnson when he takes office, to facilitate the ratification of the withdrawal agreement and achieve an orderly Brexit,” tweeted the bloc’s negotiator, Michel Barnier.