Tomar said there are no problems in the Centre’s three farm laws but the government still offered to suspend them as a sign of respect for farmers. 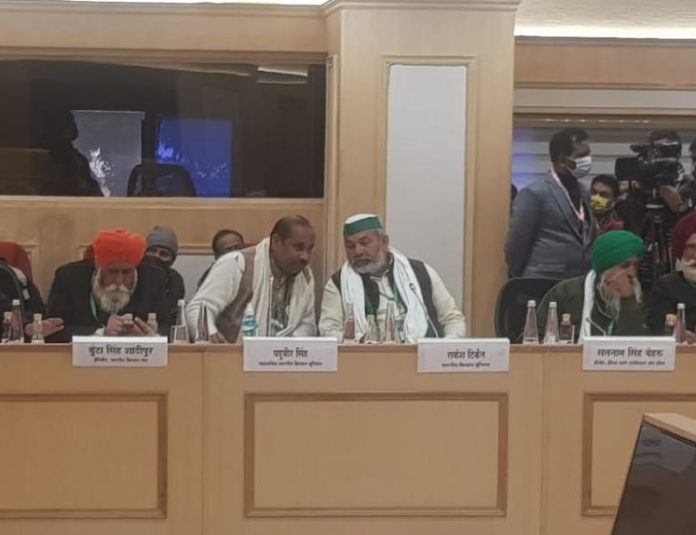 The 11th round of talks between protesting farmers’ unions and the central government remained inconclusive with the farmers’ leaders announcing that they would go ahead with their proposed tractor march on Republic Day. After the meeting ended, farmers’ leaders said they felt insulted by the manner in which the ministers treated them.

The farmer union representative on Friday met Union Agriculture Minister Narendra Singh Tomar at Vigyan Bhavan and rejected the Centre’s proposal to suspend the three farm laws for a period of 18 months. The farmers unions want nothing but complete withdrawal of three farm laws.

Talking to the protesting farmers unions, Tomar said there are no problems in the Centre’s three farm laws but the government still offered to suspend them as a sign of respect for farmers. At the end of the 11th meeting to break the deadlock over the farm laws, Tomar thanked the protesting farmer unions for cooperation and told them that the government is ready for another meeting with farmers to discuss proposal on suspending laws.

After ten rounds of talks failing to produce any result in the last two months, farmers were doubtful about today’s meeting before heading to the Vigyan Bhavan. During the tenth round of discussions, which were held on Wednesday, the government had offered to suspend the implementation of the farm laws for 12 to 18 months, only to see it rejected by the farmers.

The protesters are still demanding complete repeal of farm laws and a written guarantee of the Minimum Support Price. During talk, Rakesh Tikait, Spokesperson, Bhartiya Kisan Union said that the government offered to put the implementation of the farm laws on hold for two years and said that the next round of meeting can take place only if farmer unions are ready to accept the proposal.

Ten rounds of inconclusive talks between the protesting farmers and the government forced the Supreme Court to intervene earlier this month, leading to the formation of a special committee to find a middle ground.

Facebook
Twitter
Pinterest
WhatsApp
Previous articleLalu Prasad Yadav’s health worsens, Rabri Devi, Tejashwi Yadav to reach RIMS shortly
Next articleVarun Dhawan to tie the knot with Natasha Dalal on January 24: Here is everything you need to know about the wedding