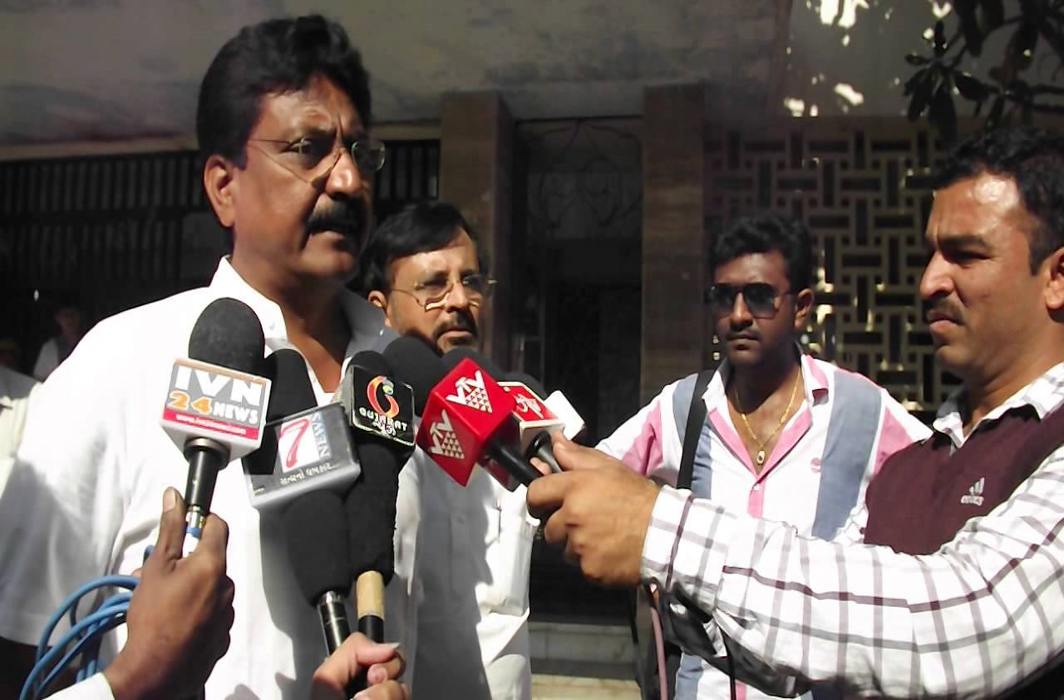 In an action that smacks of intimidation, Indranil Rajyaguru – the Congress candidate contesting against chief minister Vijay Rupani from the Rajkot West constituency in the Gujarat elections – was late on Saturday night hauled up by the police and arrested. Rajyaguru, his brother Divyaneel and some Congress workers were protesting against their campaign posters being vandalised by BJP supporters.

Scuffle between #BJP and #Congress workers in #Rajkot late last night over vandalization of a Congress candidate's poster #GujaratElection2017 pic.twitter.com/TI225xq9MY

Rajyaguru and other workers who were detained and then placed under arrest by the Rajkot police were released on bail at around 5 am on Sunday.

Rajyaguru alleged that Vijay Rupani and the BJP were trying to tarnish his image and were using the police to intimidate him because he was giving a tough electoral fight to the Gujarat chief minister. Rajyaguru’s claim of posing a serious challenge to Rupani at the hustings is not unfounded. He is the sitting MLA from Rajkot East constituency, the richest candidate in the fray and enjoys mass support across Rajkot – reasons that the Congress party factored in when it decided to field him against Rupani.

Rajyaguru, Mitul Donga, Congress candidate for Rajkot (East) seat, Mahesh Rajput, vice president of Rajkot Congress; and Rajyaguru’s close aides Bhavesh Boricha and Jagdish Mori were detained and later placed under arrest by the Rajkot police on the intervening night of Saturday and Sunday. The Congress leaders, along with some party workers had rushed to a spot near Rupani’s Nirmala Convent Road residence in the city after they got reports of BJP workers tearing up Congress’ election campaign posters.

Sources said the posters were being removed by BJP supporters because Prime Minister Narendra Modi was scheduled to address a rally in Rajkot on Sunday evening.

As Rajyaguru and his supporters reached the spot, a clash broke out between them and the BJP workers. Rajyaguru’s brother was severely injured in the scuffle along with some others and was rushed to a private hospital for treatment.

However, the police – which had reached the spot while the scuffle was on – ejected the Congress protestors, including Rajyaguru, and placed then under detention before formally arrested three of them. Sources said no complaint was filed against the BJP workers on Saturday night despite Rajyaguru alleging that the scuffle had been started by members of the saffron party following his protests against Congress’ posters being vandalised. Around Sunday noon, the police finally booked five BJP workers for assaulting Rajyaguru’s brother Divyaneel.

Videos of the clash, in which the police can be seen roughing up Rajyaguru, soon went viral on social media. Sources said the police also lathi-charged the Congress protestors.

The Rajkot West seat will go to polls in the first phase of Gujarat elections on December 9. The constituency is witnessing a prestige battle between the Congress and BJP – not just because it is the seat of the incumbent chief minister but also because it was where Narendra Modi contested and won his first assembly election in Gujarat in 2002 after being para-dropped as the state’s chief minister.

Rajkot West, as in any other seat in the Rajkot district, has a huge population of Patidar voters who have been protesting against the BJP under the banner of Hardik Patel’s Patidar Anamat Andolan Samiti. The chief minister’s constituency alone is said to have nearly 1 lakh Patidar voters and the Congress is banking on their support to defeat Rupani.