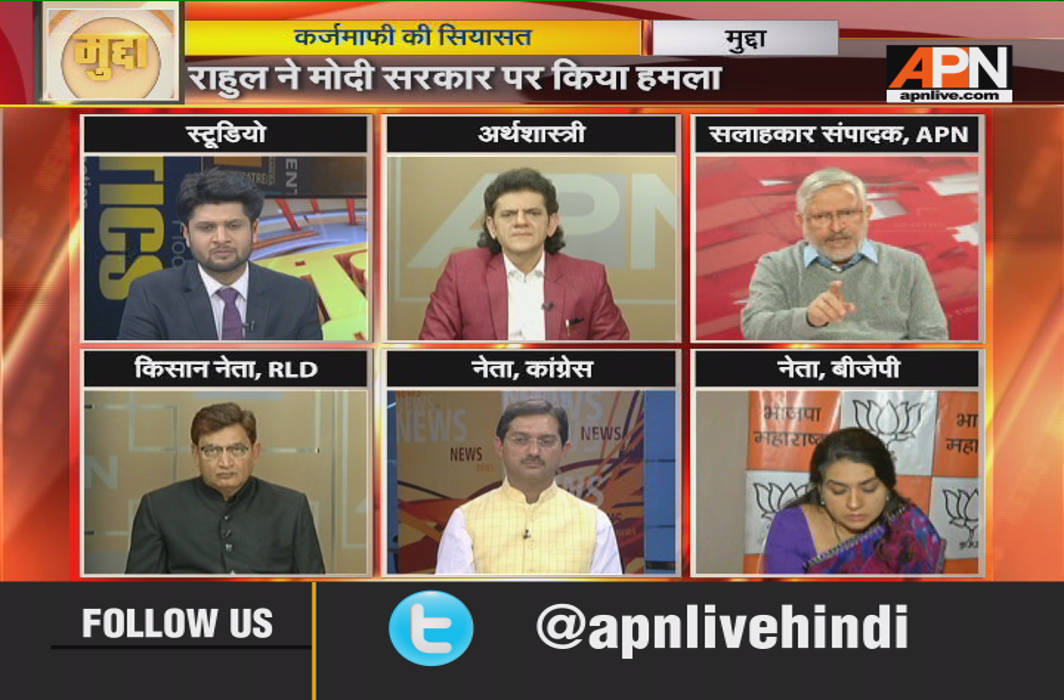 Kamal Nath signed an order to waive off farmers’ loans up to Rs 2 lakh. Farmers who had taken loans from nationalized and cooperative banks before March 31, 2018 will be eligible for the loan waiver, according to Principal Secretary (Agriculture) Rajesh Rajora.

Short-term farm loans to the tune of over Rs. 6,100 crore of over 16.65 lakh farmers, drawn from cooperative banks and Chhattisgarh Gramin Banks, as on November 30, will be waived immediately and loans borrowed from commercial banks will also be waived after proper examination, said Baghel.

How debt waiver policy is beneficial for farmers and how it affects the banking system is a big question, and to get the answer, APN in its popular debate show ‘Mudda’ has took the issue for discussion with Anchorperson Anant Tyagi along with RLD leader Ajay Veer, Economist Sharad Kohli, APN consultant Govind Pant Raju, BJP leader Shaina NC and Congress leader Anuj Atre.

Ajay Veer was the first to speak and said “Farmers don’t take loans willingly; it is their financial problems that compels them to ask for the loan. The reason for their condition is the low cost offered to them for their products, if they will get a good amount for their crops, then why anyone of them will take loan? “

Sharad Kohli was the second to speak and said “If anyone asks to waive loans of all the farmers across the country, then it will have a very bad impact on country’s GDP and will imbalance the macro-economy directly.”

Shaina NC said “Loan-waiving is not the only and permanent solution of the farmers’ problems. We will have to work for the overall development of the farmers and make sure that they get a good amount on their products, as it will be more fruitful for them than just loan-waiving.”

Govind Pant Raju said “It will be wrong to say that the present central government has not done anything for the farmers’ welfare.”

Ajay Veer said “We are not here to talk about BJP’s initiative for the development of farmers or what Congress did? But, the main issue is that the farmers are still not getting the reasonable price on their products”

Sharad Kohli said “Loan waiving is not the ultimate solution for the farmers’ problem; it will just give them temporary relief.”

Shaina NC said “BJP has started so many schemes for the farmers and their development.”

Anuj Atre said “Congress has always given importance to the development of farmers and agriculture sector, while BJP is making false promises.”

He also added that “The party will work for increasing the income of the farmers and will ensure that they should get reasonable amount on their products.”

Sharad Kohli asked “Why politicians feel the need of loan waiving, why they don’t take steps to make the farmers financially strong?”

He also added that “Politicians should note practice vote-bank policy and must work on ground level to improve the condition of the farmers.”

After the discussion, it comes to our knowledge that politicians offer ‘loan waiving policy’ to woo the voters and it is not the permanent solution of their problems.