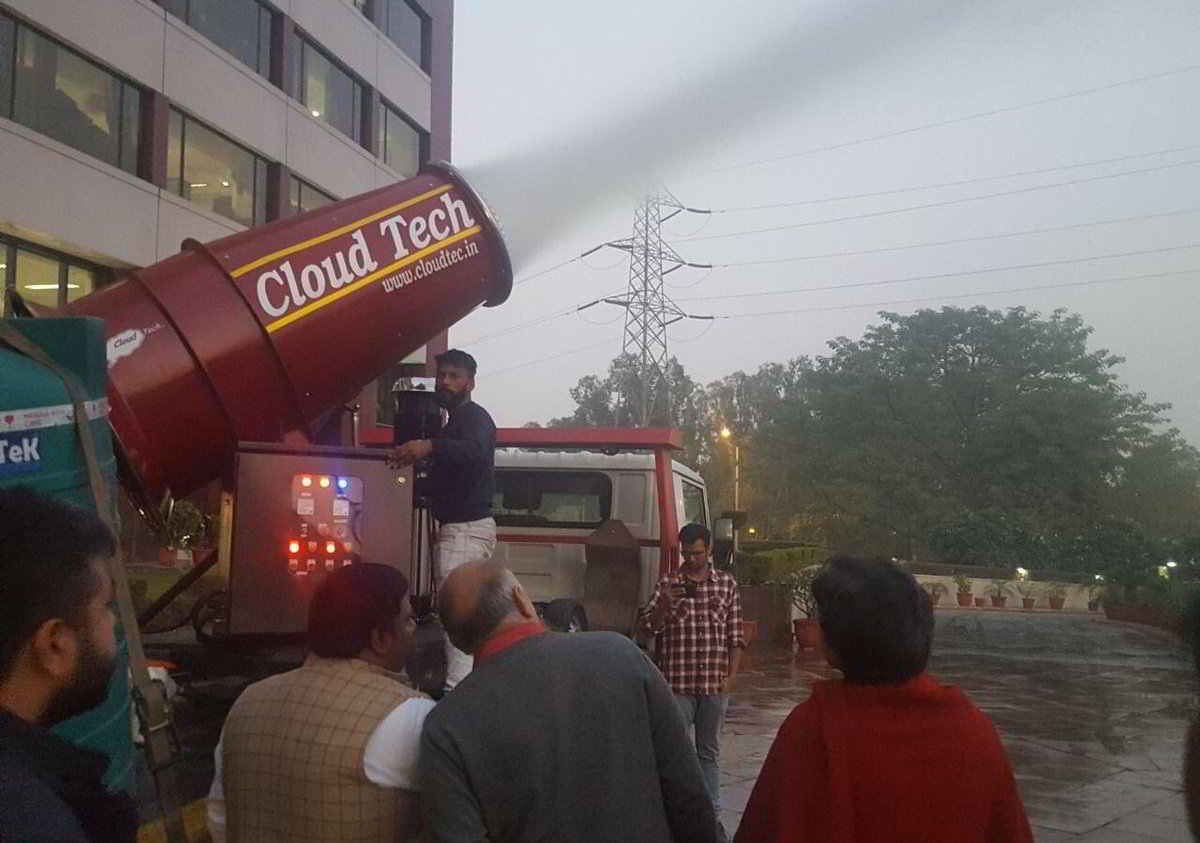 Struggling to find ways to deal with the problem of haze and air pollution in the capital, the Delhi government is trying out a novel technique: using ‘anti-smog guns’, which spray water droplets in the air to settle particulate matter, like rain does.

A trial of the anti-smog gun was held in East Delhi at Anand Vihar on Wednesday even as the air quality in the city deteriorated to ‘very poor’ levels and, in Anand Vihar, it entered the ‘severe’ zone with air quality index (AQI) touching 413. (See chart at the bottom for AQI categories).

In Delhi, pollution levels usually remain poor during winters primarily due to stubble burning from adjoining state and rapid drop in temperature.

Rising humidity and low wind speed were behind the spike in pollution levels, according to experts. SAFAR, India’s official pollution forecasting system, has claimed that pollution could spike further over the next three days.

“The wind speed dropped from around 15km/hour on Sunday to around 4 km/hour on Wednesday,” said media reports quoting a senior official of the regional weather forecasting centre in New Delhi.

“While on one hand, the moisture in the air is trapping the pollutants that are being emitted locally, the low-velocity winds are unable to flush them out. As a result, pollutants are accumulating and pollution in rising gradually,” said D Saha head of the air quality laboratory at the Central Pollution Control Board (CPCB), according to a Hindustan Times (HT) report.

CPCB data showed that levels of both PM10 and PM2.5 — primary pollutants in Delhi’s air — have almost doubled since Sunday, reported HT.

Experts said Delhi would need some strong winds from the north to flush out the pollutants, but, coming from the Himalayas, these would also send temperatures plummeting.

At a meeting on Tuesday to review the detailed action plan of agencies and stakeholders on measures to combat air pollution, Environment secretary Anil Kumar Singh had apprised Lt Governor Anil Baijal of plans for the trial run of anti-smog gun.

The Lt Governor directed authorities to ensure management of municipal solid waste completely in a time frame of 16 months.

“The plan should cover a time-frame not exceeding 16 months and also indicate the exact requirement of funds. The chief secretary has been asked to coordinate and finalise it,” said  the L-G office in a statement.

Baijal directed all three corporations to ensure that no methane fires occur at the three landfill sites and for this, they should take help of experts of the Science & Technology Ministry, the statement said.

The Lt Governor was informed in the meeting that Badarpur Thermal Power Station will be permanently closed by July 2018.

“It was also informed that at present over 800 acres ash pond is in O Zone and NHAI is lifting 600 MT ash daily. The L-G stressed for optimal future utilisation of this huge land parcel. Apart from this, measures to provision full gas for Bawana plant were also discussed,” the statement reportedly said.