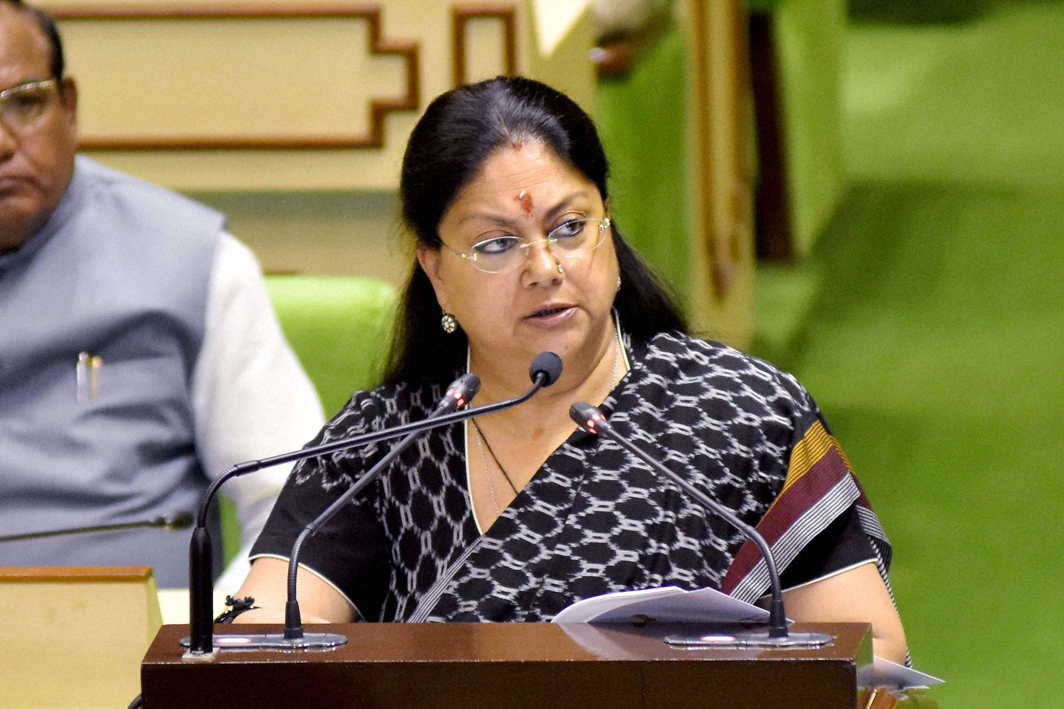 The Centre has defended the controversial Bill while Congress, a section of jurists and the Editors Guild have called it illegal

Amid a huge political uproar and even dissent within its own legislators, the Vasundhara Raje-led BJP government in Rajasthan, on Monday, tabled a controversial Bill for passage in the state Assembly. The move came on a day when senior lawyer AK Jain filed a public interest litigation (PIL) in the Rajasthan High Court challenging the Criminal Laws (Rajasthan Amendment) Ordinance, 2017 on the ground that its provisions are “unconstitutional”.

The controversial Bill, which if enacted would replace an ordinance of the same title that was promulgated by the Raje government on September 7, seeks to protect serving and former judges, magistrates and public servants in the state from being investigated for on-duty action, without prior sanction to prosecute being granted by the Rajasthan government. The Bill also proposes a gag on the media from reporting on such cases against former and serving babus and the state’s judiciary till such a time when sanction to prosecute the public servant is granted by the state.

The Congress, which is the principal Opposition party in the state, along with a section of jurists, the Editors Guild of India, and even BJP legislators Ghanshyam Tiwari and Narpat Singh Rajvi have slammed the Vasundhara Raje government over the ordinance (now a Bill), terming it “unconstitutional” and “reminiscent of the days of Emergency”.

However, the BJP-led central government has come out in support of the ordinance with minister of state for law and justice, PP Choudhary – a Lok Sabha MP from Rajasthan’s Jodhpur constituency – terming the proposed legislation as one that is “very much needed in these times”. Speaking to news agency ANI, Choudhary said about the proposed Bill: “This is a perfect and balanced legislation. It takes care of the media as well as rights of an individual. This legislation was very much needed in these times.”

On Monday, as the Bill was tabled in the Rajasthan Assembly, the Congress announced that it would fight against the Raje government’s “attempt to cover up their own corruption” and that the party will submit a memorandum to President Ram Nath Kovind over the issue. Rajasthan Congress chief Sachin Pilot along with several other party members, who were carrying out a peaceful protest march to the Raj Bhavan in Jaipur to submit a memorandum to the Governor challenging the ordinance, were detained by the police earlier in the day.

Interestingly, the political opposition to the immunity ordinance has come not just from Congress but also from a section of BJP legislators. Soon after the Bill was tabled in the Rajasthan Assembly on Monday morning, BJP MLAs Ghanshyam Tiwari and Narpat Singh Rajvi termed it “a black law” and said that the “legislation seeks to grant immunity to the corrupt”.

Tiwari, senior BJP MLA from Sanganer constituency and a former state education minister, said: “The law ushers in an era of emergency and violates the basic freedoms guaranteed to a citizen. They (the government) issued this ordinance, a month ago. They have granted immunity to themselves, their ministers, and the members of the CMO who have been involved in corrupt practices. This black law, which is unconstitutional and reminiscent of the days of the Emergency, will protect those in power.”

Meanwhile, in a statement issued late on Sunday night, the Editors Guild of India termed the ordinance as a “pernicious instrument” to harass the media and asked the Rajasthan government to “withdraw the harmful ordinance” that bars the media from reporting on accusations against public servants, judges and magistrates without its sanction.

“The ordinance promulgated by the State government last month was ostensibly done to protect the judiciary and the bureaucracy against false FIRs. But in reality it is a pernicious instrument to harass the media, hide wrongful acts by government servants and drastically curb the freedom of the press guaranteed by the Constitution of India,” the Guild said in its statement.