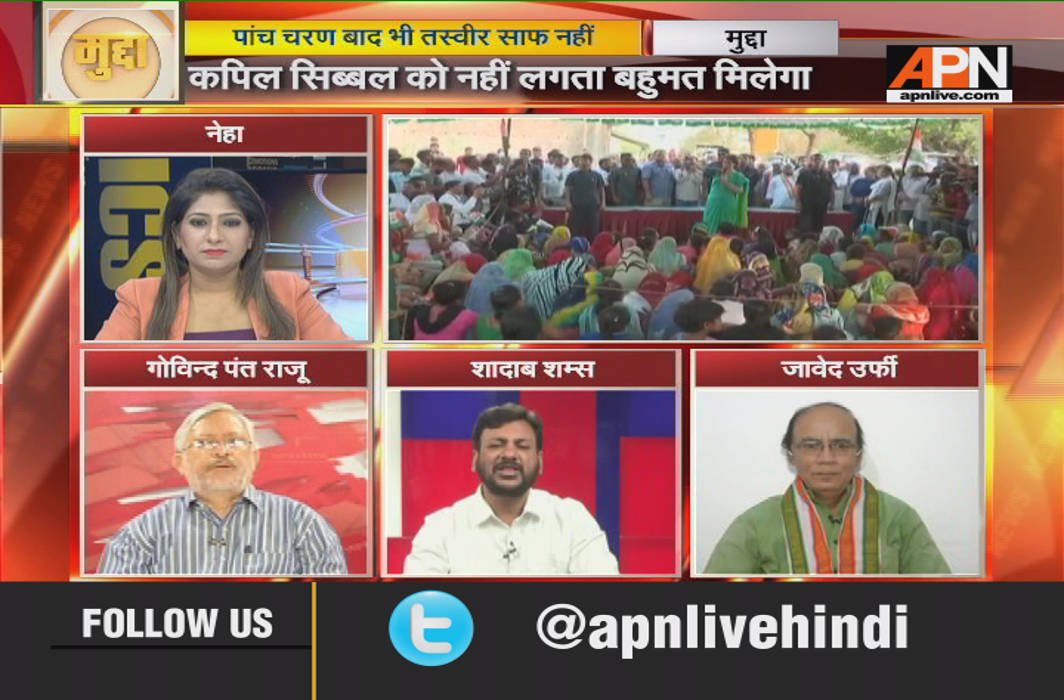 The fifth phase of polling for the general elections is over, with no clarity as yet as to who will emerge winner.  APN’s popular debate Mudda discussed the issue. The next phase of polling is on May 12 and May 19. Anchorperson Neha Dubey posed the questions to panellists, including the Congress’s Javed Urfi, BJP’s Shadab Shams, and APN consultant Govind Pant Raju.

Shadab said: “BJP confidence is high. Our vision is clear, we will not get less than 300 seats. In Orissa and West Bengal, we shall be making a dramatic headway.”

Neha pointed out that Subramanian Swamy and other BJP leaders have stated that the figures for BJP might not be that great. Shadab said: “Irrespective of what individual leaders say, we will go by what Modi and Amit Shah has been saying.”

Urfi said: “Subramanian Swamy and BJP spokesperson Ram Madhav have correctly stated that the BJP will not be getting a clear mandate this time, there is no wave in favour of BJP this time. BJP has been indulging in deflection tactics.”

Raju said: “Congress star campaigners have stated that in UP, the strategies are working and not elsewhere. This shows that the Congress has in a way accepted that it will not be forming the government. Subramanian Swamy stated in a general way while talking of Balakot and how it will affect BJP fortunes. Ram Madhav has already stated that his statement has been twisted in the media.”

Shadab said: “Ram Madhav has stated that he has been misquoted in media. Congress has a strange strategy, it is being double-faced, it has no vision, it only wants to be in the government, it has no policy and no leader. The issue is that we need clear-cut strategies. Modiji’s vision is absolutely clear. For the BJP, it is nation first, party second and self last.”

Urfi said: “For all parties, big or small, first is the nation. For Congress too, nation is first. Look at mob lynching and breakdown of law and order undr the BJP dispensation.”

Raju said:”Let’s not indulge in mudslinging. Sonia Gandhi or Robert Vadra cases are pending in courts. The going looks tough for Congress. It failed to stitch together a grand alliance. That has been its biggest failure.”

Urfi said: “The regional parties, Mayawati, and so on, will need Congress help if it wants to stay away from the BJP. The Congress has always been firm on its stand. The results will stun all.”