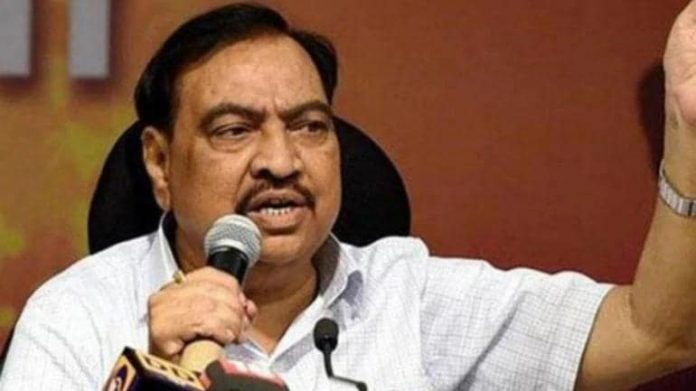 Bharatiya Janata Party leader Eknath Khadse resigned from the party on Wednesday and will be joining Nationalist Congress Party on Friday. The development has been confirmed by Maharashtra minister Jayant Patil, just a day after former chief minister Devendra Fadnavis rubbished the reports on Khadse leaving the saffron party.

According to reports, Khadse had been upset with the party since the time he was asked to step down from his ministerial position following allegations of corruption in 2016. Khadse’s daughter Raksha Khadse too may join the NCP along with her father.

Patil said that the NCP is set to welcome Khadse into its fold and he will be inducted into the party on Friday. Earlier on Monday, NCP chief Sharad Pawar had heaped praises on the former minister saying he had played a very important role in establishing the saffron party in Maharashtra. He had said that if Khadse’s hard work and contribution were not being recognized by his party, he should look at other options and join hands with a party that will appreciate his work.

Earlier, former Maharashtra chief minister Devendra Fadnavis had rubbished the reports of Khadse quitting the BJP and said such talks were a routine affair. Fadnavis was paying a visit to the Osmanabad district to assess the losses suffered by farmers due to rains. He refused to further comment on the issue. If reports are too be believed, all is not well within the Maharashra unit of the BJP and many other leaders from the saffron party might soon quit the party and join NCP.

Khadse was accused of corruption in 2016 following which he was asked to resign from his post as minister. He was later given a clean chit by the Maharashtra Anti-Corruption Bureau in the land deal case involving him.