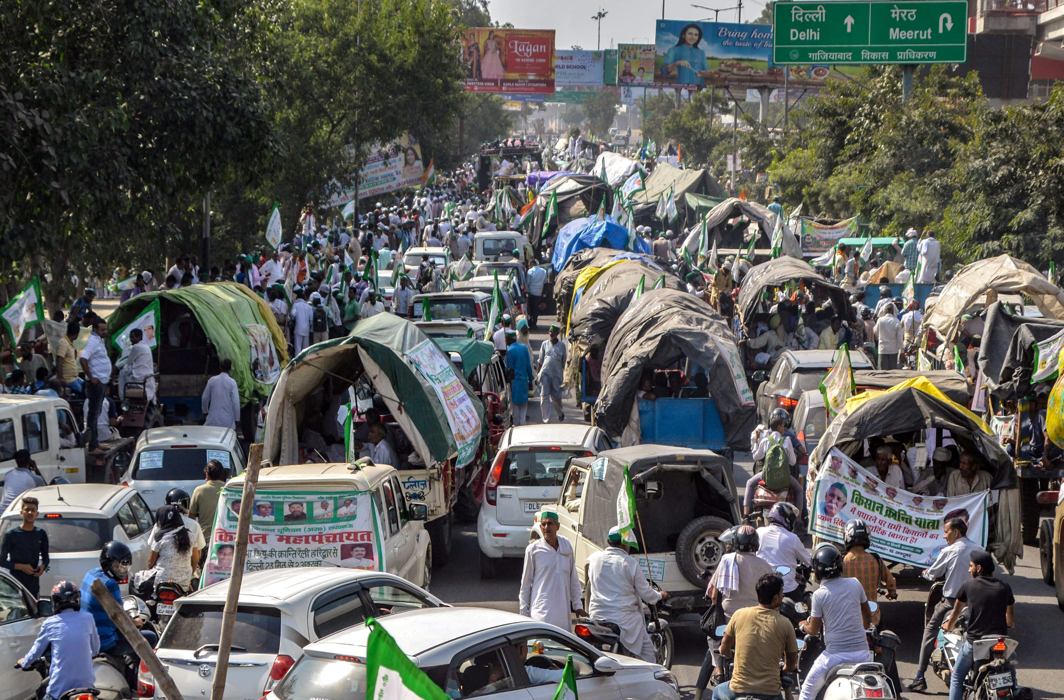 Expressing dissatisfaction with government’s assurance to look into the matter, Bharatiya Kisan Union (BKU) president Naresh Tikait said the farmers will continue with the protest until the demands are met.

Earlier, the government announced that a committee of chief ministers will look into their demands, even as the protesters stayed put saying they were not satisfied with the assurance.

After meeting the protesting farmers at the Delhi-UP border in Ghaziabad, Union minister of state for agriculture Gajendra Singh Shekhawat said the government was assuring the farmers to take forward their cause.

“I assure you all this. We will move court over the NGT order (to ban tractor and vehicles which are more than 10 years old),” he said.

On another problem faced by the farmers about farm labour, the minister said the government would look at bringing in some changes to the minimum wage rules for rural areas to solve this problem.

“The government has formed a committee of six chief ministers to look into this issue of labour for farm. The committee is in talks to connect MNREGA with agriculture,” Shekhawat added.

“On behalf of (Union Home Minister) Rajnath Singh, I assure you that I will represent the farmers’ interests in this committee and whatever changes would be required to link MNREGA with agriculture will be made,” Shekhawat told the farmers.

The protesting farmers, however, decided to stay put at the Delhi border, where they have been stopped by the police from entering the national capital.

Earlier today, Home Minister Rajnath Singh had agreed to meet most of the demands of the thousands of Bhartiya Kisan Union (BKU) protesters, who are on a march from Hardwar to Kisan Ghat in the national capital to protest against the alleged apathy of the BJP government towards the farming community.

Tens of thousands of farmers walked and travelled to Delhi for ten days in tractors from neighbouring Uttar Pradesh. They were supposed to end their rally at Kisan Ghat, the memorial of renowned farmer leader Chaudhary Charan Singh, near Raj Ghat, but were stopped at the heavily-barricaded Delhi-UP border. Farmers tried to get past the barriers and raised slogans forcing the police to use batons, tear gas shells and water cannons to disperse them. Several protesters were injured in the process.

The farmers have been protesting as part of their “Kisan Kranti Yatra” to demand loan waiver, subsidised electricity and fuel, pension for farmers above 60 and implementation of recommendations of the Swaminathan Commission.

The yatra began from Tikait Ghat in Haridwar on September 23 and farmers from places as far as Gonda, Basti and Gorakhpur in eastern Uttar Pradesh and the sugarcane belt of western UP joined the agitation.

After talks with the government, BKU leaders say that they haven’t reached an agreement on the full implementation of the Swaminathan report regarding the minimum selling price (MSP), and their demand of one-time complete loan waiver.

“We had a discussion on 11 points. The government agreed on seven and didn’t agree on the rest. They said they will discuss those points get us back to us, as if it is a financial matter,” Yudhvir Singh, BKU spokesperson, said according to a NDTV report.

Opposition parties attacked the centre over the police action, and what they call as “unfulfilled promises” and increasing farmer distress.

Congress chief Rahul Gandhi said the BJP’s Gandhi Jayanti celebrations on International Day of Non-Violence started with an attack on farmers who were peacefully marching to register their protest. “Now the farmers can’t even express their anguish,” he tweeted.

Congress spokesperson Randeep Singh Surjewala said, “What is the Modi government doing on the 150th birth anniversary of Mahatma Gandhi? What is the govt doing on the birth anniversary of Lal Bahadur Shastri who said Jai Jawan Jai Kisan’? The govt is brutally beating up India’s farmers. It has launched a police raj and unprecedented atrocities on the farmers of the country. Can India’s farmers not come and tell their own government that they are in deep pain and suffering from deep rural indebtedness?”

“Peaceful and unarmed farmers going towards Raj Ghat were brutally treated, they were lathicharged and teargas shells fired on them. We condemn this,” KC Tyagi of Janata Dal (United) said.

Delhi Chief Minister Arvind Kejriwal said farmers should be allowed to enter Delhi. “This is wrong. Delhi belongs to everybody. Farmers cannot be stopped from coming to Delhi. Their demands are valid and should be agreed upon. We are with the farmers,” he said.

Former UP Chief Minister Akhilesh Yadav also supported the farmers’ rally. “This government has not fulfilled the promises it made to the farmers, so it is natural that farmers would protest. It is unfortunate and we fully support the farmers,” the Samajwadi Party chief said.

“Instead of providing relief to farmers, they are exacerbating the crisis. We haven’t seen such an agrarian distress in India since independence,” said CPI(M) leader Sitaram Yechury.

The Kisan Kranti Yatra, which began from Tikait Ghat in Hardwar on September 23, is the first of its kind by the BKU since the death of its founder Mahendra Singh Tikait on May 15, 2011. The Tikait clan, including the patriarch’s four sons, their wives, grandsons and their children have also hit the streets along with others.