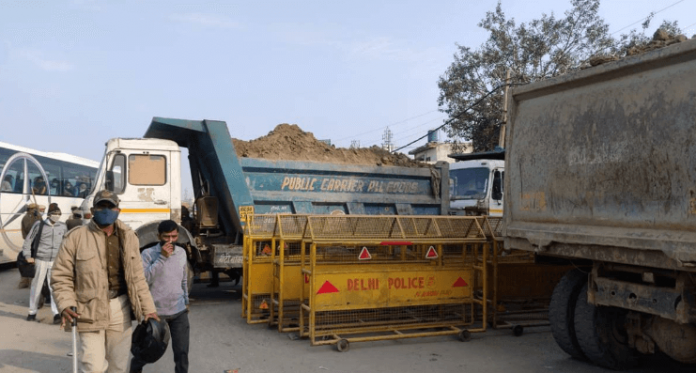 Thousands of farmers heading towards Delhi were stopped by security personnel posted by BJP-ruled Haryana which has barricades to avoid them from entering Delhi. The state had sealed borders with Punjab yesterday on Chief Minister Manohar Lal Khattar’s orders.The agitated farmers carrying sticks and even swords threw bricks at police and physically pushed vehicles and flung barricades into the river. The police used water cannons and tear gas to disperse the protesters but after two hours clash on a bridge, the farmers managed to cross border into Haryana.

The protesters were trying to break through police barricades at Sadopur border in Ambala when the police used tear gas shells against the protesting farmers.

Swaraj Abhiyan chief and activist Yogendra Yadav has been detained with other protesting farmers in Gurugram. Yadav wrote on his twitter handle that he has been taken to a school in the Mokalwas village.

To stop the farmers’ from entering Delhi border, the Haryana police parked a truck in the middle of the bridge but that only prompted the protesters to push the heavy vehicle and clear their path. A large police contingent, who had filled the bridge in the morning, were pushed to its edge.

Meanwhile, Delhi Chief Minister Arvind Kejriwal said the farm laws are aginst farmers. Instead of taking the controvesial farm laws back, the government is stopping farmers to protest peacfully, tear gas and water cannons are being used to disperse them. It is their constitutional right to protest peacefully.

Workers of Centre of Indian Trade Unions (CITU) form a human chain in Kochi as part of their nationwide strike today against Centre’s new labour and farm laws.

The Delhi government has refused to allow any rally in the city, citing the increase in the number of coronavirus cases. Delhi’s borders at Gurugram and Faridabad have been sealed and metro services have been affected.

The BJP is facing backlash in three states whose farmers are most agitated against the farm laws as they fear that new laws will take away their bargaining power and allow large retailers to have more control over prices and also the news laws do not give any statutory backing to MSP. The party has lost one of its key allies Shiromani Akali Dal (SAD) in Punjab which opposed the laws in Parliament.