Home Latest india news You have been a father figure, mentor: Modi to Pranab on his... 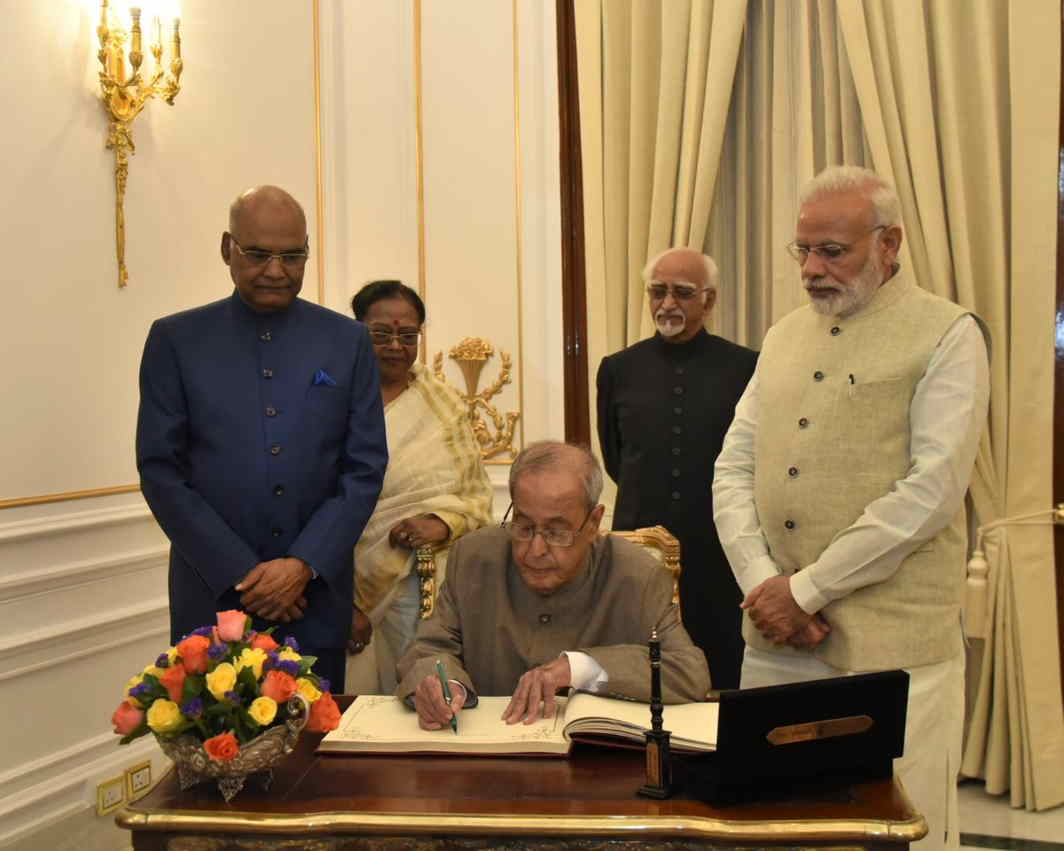 The two may be from completely divergent political ideologies but in a gesture that goes beyond politics, Prime Minister Narendra Modi wrote a touching letter to former President Pranab Mukherjee on July 24, the latter’s last day in the country’s highest constitutional office. On Thursday, Mukherjee responded by sharing the letter on micro-blogging site Twitter and remarked that Modi’s gesture “touched my heart”.

On my last day in office as the President, I received a letter from PM @narendramodi that touched my heart! Sharing with you all. pic.twitter.com/cAuFnWkbYn

In the two-page letter that Mukherjee’s former colleagues in the Congress party may not really relish for obvious political reasons, Modi says: “Three years ago, I came to Delhi as an outsider. The task before me was huge and challenging. In these times, you have always been a father figure and a mentor to me. Your wisdom, guidance and personal warmth have given me greater confidence and strength.”

Interestingly, these three years have arguably been the worst for the Congress party which Mukherjee was affiliated with for over six decades before being sworn-in to the apolitical office of the country’s President. And the cause for the Congress’ political misery has, in a large measure, been Modi, who, as he himself points out in the letter, was still an “outsider” to the Lutyen’s Delhi politics when he became Prime Minister in May 2014, riding high on his promise of delivering a ‘Congress mukt Bharat’.

“As you begin a new phase of your distinguished journey, I cannot but express my profound sense of admiration and gratitude for your immense contribution to the nation, particularly as President of India over the last five years. You have inspired us with your simplicity, high principles and exemplary leadership,” the letter further states.

In a two page long letter dated July 24, 2017, the Prime Minister Modi described the former president as warm, affectionate and caring. He further said that Mukerjee has always been a father figure to him.

“You belong to a generation of leaders for whom politics was simply a means to selflessly give back to society. India will always be proud of you, a President who was a humble public servant and an exceptional leader,” expressed PM Modi.

Hailing Mukherjee as a “repository of knowledge”, Modi wrote: “I have always marvelled at your insights on various subjects, ranging from policy to politics, economics to external affairs, and security issues to subjects of national and global importance. Your intellectual prowess has constantly helped my government and me.”

The Prime Minister, who rarely ever lets his emotions known, also states: “You have been so warm, affectionate and caring to me. Your one phone call asking me ‘I hope you are taking care of your health’ was enough to fill me with fresh energy, after a long day at meetings or on a campaign tour.”

Flattering the former President further, Modi wrote: “Pranab Da, our political journeys took shape in different political parties. Our ideologies, at times, have been different. Our experiences are also varied. My administrative experience was from my state, whereas you have seen the expanse of our national polity and politics for decades. Yet, such is the strength of your intellect and wisdom that we were able to work together with synergy.”

“You belong to a generation of leaders for whom politics was simply a means to selflessly give back to society. You stand as a great source of inspiration for the people of India. India will always be proud of you, a President who was a humble public servant and an exceptional leader. Your legacy will continue to guide us,” Modi added.

The camaraderie between Mukherjee and Modi that can be sensed from the contents of the latter’s letter extended on Twitter too. Soon after Mukherjee shared the letter on Twitter, Modi replied: “Pranab Da, I will always cherish working with you.”

Pranab Da, I will always cherish working with you. @CitiznMukherjee https://t.co/VHOTXzHtlM

It was only a week back that Mukherjee had made his personal Twitter account – @CitiznMukherjee for he earlier used to tweet from the @rashtrapatibhvn handle, which is now the official handle for his successor, President Ram Nath Kovind. However, all tweets made by Mukherjee as President have now been archived at ‘@POI13’. It was Mukherjee, who as India’s 13th President, had started the official Twitter handle of the Rashtrapati Bhavan.