GAMES
Home Festivals Govardhan Puja: What is the annakoot recipe? Here are some videos that...
FestivalsLatest Lifestyle News

Govardhan Puja: What is the annakoot recipe? Here are some videos that will help you 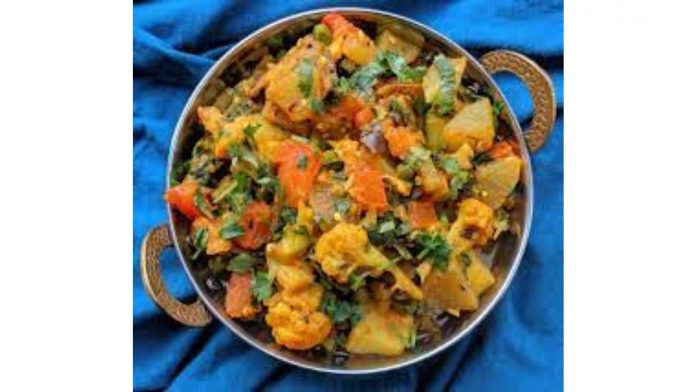 Govardhan Puja, also known as Annakoot Puja, is a Hindu festival held on the fourth day of the Diwali celebration, which lasts five days. Devotees worship Govardhan Hill and prepare and serve a wide range of vegetarian cuisine to Lord Krishna as a token of gratitude during this festival. It is commonly observed in northern India on the first day of Shukla Paksha in the Hindu month of Kartik.

The special dish made on Govardhan Puja is Annakoot Ki Sabzi which is a medley of vegetables ideally prepared with 56 different ingredients for Annakut Bhog or Prasad, also known as Chappan Bhog. It is generally made with a large number of seasonal vegetables like eggplant, radish, carrot, bottle gourd, cauliflower, potato, peas, etc. Green leafy vegetables like spinach, fenugreek, etc. are also used. This recipe has no ginger or garlic because it is made for a festival.

Annakoot ki Sabzi is initially offered to the Lord on the day of Goverdhan Pooja, and then it is distributed as prasad to everyone else. It’s usually served with roti or poori, along with moong dal, kadhi, and chawal.

Before you begin, wash and cut all of the veggies and set them aside. In a heavy-bottomed pan, add cooking oil. Reduce the heat to low and add Mustard Seeds to the heated oil. Add the Cumin Seeds when the Rai begins to sizzle and cook for a few seconds.

In a pan, combine the asafoetida, red chili powder, and turmeric powder.

Add some salt and fully combine all of the veggies with the spices before sauteing for a few minutes.

Now, Garam Masala and Coriander Powder are added to the pan.

Stir the chopped green vegetables, such as spinach and fenugreek leaves, until well mixed. Add chopped tomatoes. and mix them well, then cover with a lid. Stir occasionally and cook for 10 minutes or till the vegetables are soft.

Annakoot Ki Sabzi is ready. If prepared on the auspicious day of Govardhan Puja, it is first presented to Lord Krishna as Prasad and then eaten hot with Roti or Poori.

Here are some of the following videos that can help you cook Annakoot Ki Sabzi without any hassle: