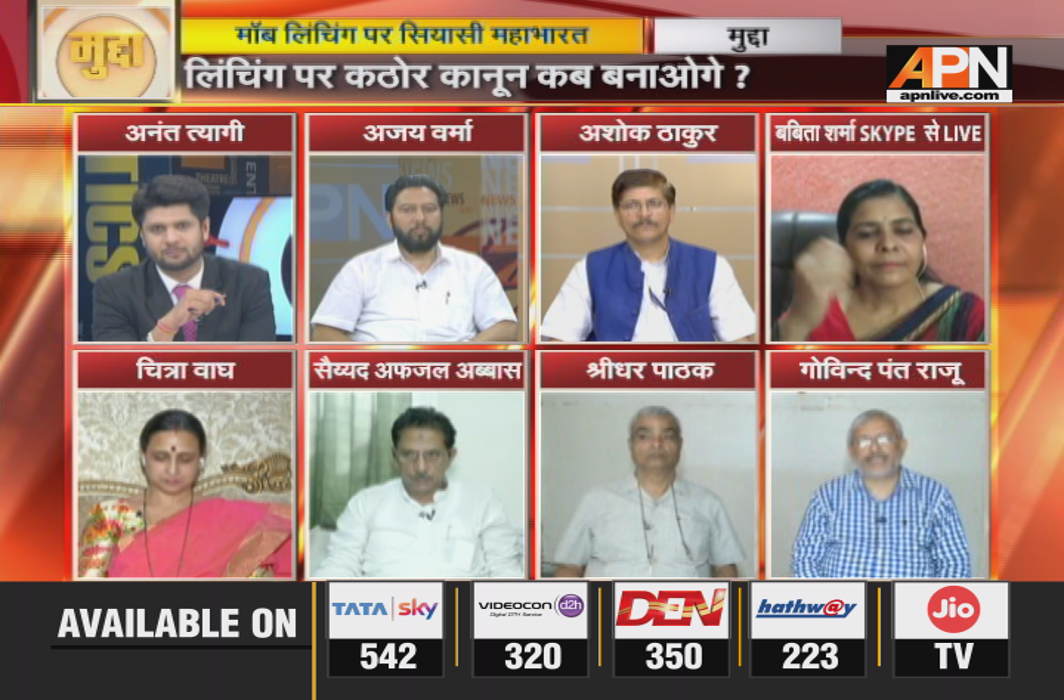 Even as the Supreme Court agreed to hear on August 28 pleas seeking contempt action against the Rajasthan government in the latest lynching of a Muslim man in Alwar, on Sunday, a 25-year-old woman was killed in Singrauli district of Madhya Pradesh by cow vigilantes. APN’s popular debate Mudda discussed the issue.

Thakur said: “These are extremely sad. We need to look at all these cases seriously at the national level.” When Anant informed that Union minister Mahesh Sharma had denied it took place, Thakur said: “Let’s not club the lynching issue with the BJP.”

Verma said: “The government needs to tighten the screws. No jumla on lynching is needed; the government should be showing its seriousness by acting tough on the perpetrators of the crime, so that people are afraid to take the law into their own hands. This should be accorded top priority by the government.”

Vagh said: “These incidents show the ineffectiveness of the government. The recent case in Dhulia, Maharashtra, was also a lynching case.”

Thakur said:  “The law is going to take its own course. The governments and the people need to join hands to prevent such incidents. These incidents are reflective of people falling prey to an emotional pitch.”

Raju said: “We can’t just say that these incidents happen due to a certain emotional pitch. Whether it’s gau rakshaks or other kinds of lynching, these are highly shameful incidents.”

Pathak said: “Since a court takes time to come out with the final verdict, people are taking law into their own hands.”

Thakur said: “If people attach so much reverence to the cow, people should be conscious of not instigating those whose sentiments might get hurt. Fear of law needs to be felt among both by the mob as well as those who incite people.”

Abbas said: “In any case, all those involved in lynchings should be punished.”

Pathak said: “Let’s leave faith aside; we should be focusing on the law. No one should be allowed to go scot-free.”

Vagh said: “It’s the government’s responsibility to act tough. The problem is that police know everything, that’s why we suspect the intention of the government.”

Thakur insisted that the nation has been hugely peaceful ever since the BJP came to power. This led to an exchange of allegations and counter-allegations between Thakur and Vagh.

Anant wanted to know how come gau raksha has become such an important issue of late, Raju said: “It looks like there’s a certain atmosphere that is encouraging such thinking. Lots of people who consider cow as mother, abandon the cow when it does not give milk. In reality there’s no filial or emotional feeling regarding the cow, people are looking at their own interests only.”

Sharma said: “I am against lynching, but people should know that the cow is our mother.” To this, Verma retorted: “You are a social worker but are only talking about the cow, and not people.”

Thakur said: “I admit the system and the government are both to be blamed. But bear in mind that despite the laws being in place, incidents of crime do take place.”