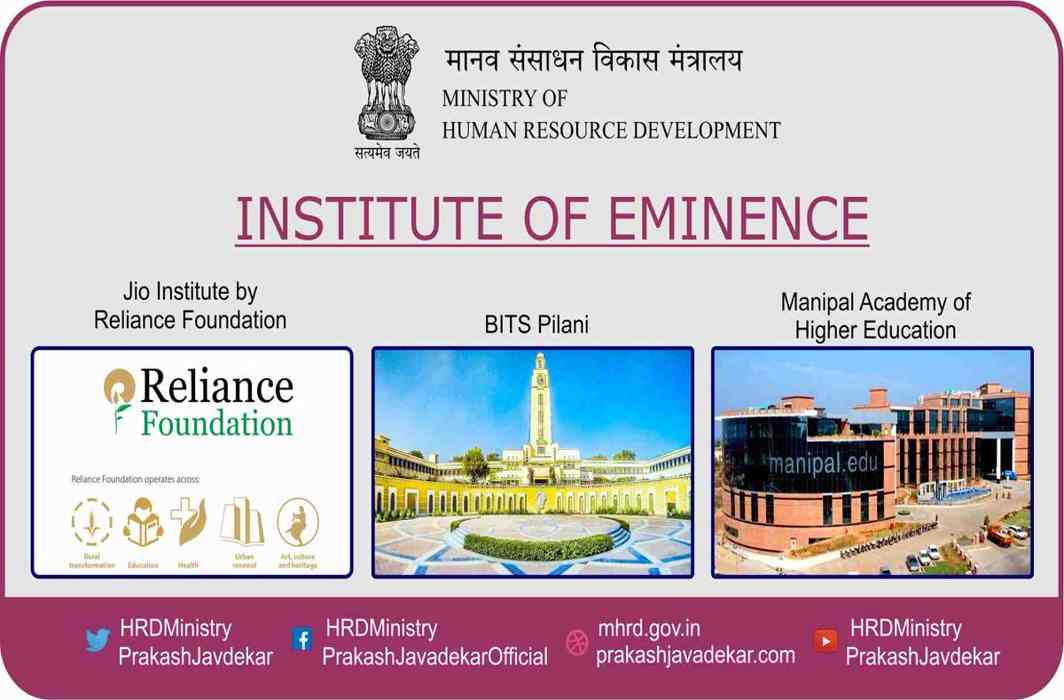 The government has named three private and three public universities as “Institutions of Eminence” which will enjoy greater autonomy, can decide fee structure, have flexible course durations and structure to strive to raise their standards as world-class institutions in the coming years.

The list includes IIT Delhi, IIT Bombay and Indian Institute of Science (IISc) Bengaluru among the public universities and BITS Pilani, Manipal Academy of Higher Education and the Jio Institute of the Reliance Foundation.

The Reliance Foundation’s Jio Institute is yet to be launched, and its inclusion sparked a controversy and invited widespread criticism. Facing questions and attacks from the Congress, The Ministry for Human Resource Development (HRD Ministry) responded with a tweet, accusing its critics of a misinformation campaign. It pointed out that the status can be bestowed on institutes that make the cut under the greenfield category for new or proposed institutions, provided the sponsoring organisation submits a convincing perspective plan for 15 years.

On Monday, Jio trended on Twitter, with many tagging Education Minister Prakash Javadekar, asking him about the institute’s location and credentials. Besides Jio, the list includes BITS Pilani, Manipal Academy of Higher Education, Indian Institute of Science (IISc), Bengaluru, and the Indian Institutes of Technology in Mumbai and Delhi.

The Congress tweeted, “The BJP Govt favours Mukesh & Nita Ambani yet again. The illusionary JIO Institute which is yet to see the light of day has been declared as an ’eminent’ institute. The Govt needs to clarify the basis of classification for granting such a status. #SuitBo…”

Ministry of HRD tweeted: In response to some misinformation campaign in social media regarding “Institutes of Eminence”, please find herewith clarifications on commonly raised questions #InstituteofEminence

In response to some misinformation campaign in social media regarding “Institutes of Eminence”, please find herewith clarifications on commonly raised questions #InstituteofEminence pic.twitter.com/K6IB5ILpfb

Earlier on Monday, making the announcement about Institutes of Eminence in a series of tweets, Mr Javadekar said, “The #InstituteofEminence are important for the country. We have 800 univ, but not a single university in top 100 or even 200 in the world ranking. Today’s decision will help achieve this.”

The institutes, he said, have been selected by an experts’ panel. IIT Bombay and Delhi, he said, will receive government funding, “because public sector institutes which are granted status of Institutes of Eminence will get govt grant of Rs. 1000 crore in next five years”.

The Union Cabinet had approved UGC’s ‘Institutions of Eminence Deemed to be Universities Regulations 2017’, in August, 2017. The regulations are aimed at creating an enabling architecture for 10 public and 10 private institutions to emerge as world-class institutions, since the country has little representation in the international ranking of educational institutions, reported The Indian Express (IE).

Only higher education institutions currently placed in the top 500 of global rankings or top 50 of the National Institutional Ranking Framework (NIRF) are eligible to apply for the eminence tag. The private IoEs can also come up as greenfield ventures, provided the sponsoring organisation submits a convincing perspective plan for 15 years.

The IoEs are proposed to have greater autonomy compared to other higher education institutions. For instance, they will be free to decide their fee for domestic and foreign students, and have a flexible course duration and structure.

Their academic collaborations with foreign institutions will be exempt from approvals of government or UGC except institutions based on a list of negative countries prepared by the External Affairs and Home ministries.

Once identified, the target for the IoEs would be to break into the top 500 in at least one internationally reputed ranking framework in 10 years and come up in the top 100 over time.

The 10 government institutions, in addition to autonomy, will also get Rs 1,000 crore each from the HRD Ministry to achieve world-class status. The government will offer no financial assistance to the private institutions.

The Empowered Expert Committee (EEC), which was entrusted to find 20 institutions out of 114 applicants, could only identify 11, of which six have been awarded the eminence tag, for now.

The four-member EEC is headed by former Chief Election Commissioner N Gopalaswami and has Renu Khator, president of University of Houston, R Pritam Singh from the Management Development Institute and Tarun Khanna, Jorge Paulo Lemann Professor at the Harvard Business School, as its other members.

IIT-Kharagpur, IIT-Madras, Delhi University, Jawaharlal Nehru University and Jadavpur University were among 11 names suggested by EEC, but were not awarded the status, reported IE.

“Out of the 11 names suggested by the EEC, only three were private. So, a decision was taken to announce equal number of institutes from public and private sector, which, consequently, limited the announcement of public institutions to three for now,” said the report quoting government sources.

“This decision is a landmark decision for following reasons – This was never thought of & tried; it is more than a graded autonomy, it is really a full autonomy to the institutes; the institutes can take their own decisions,” HRD Minister Prakash Javadekar tweeted.

“While today’s decision gives virtually full autonomy, it will also ensure that no student will be denied opportunity of education with various measures like scholarships, interest waiver, fee waiver and ensure all equity principles,” he posted.

Out of the three private IoEs announced Monday, Reliance Foundation’s Jio Institute which, at this moment, is just a proposal on paper, was selected under the greenfield category.

According to the proposal submitted by the Reliance Foundation, the Jio Institute is proposed to have 10 schools offering over 50 disciplines, including humanities, engineering, medical sciences, sports, law, performing arts, sciences and urban planning.

The Foundation has promised to hire faculty from the top 500 global universities, a residential university city for its teachers, set up inter-disciplinary research centres to provide solutions for real-world challenges and commit Rs 9,500 crore towards the institute’s funding, among other things.

Justifying Reliance Foundation’s selection over other 10 applicants, the HRD Ministry said in a statement issued on Monday that the Jio Institute proposal satisfied four parameters – availability of land, a core team with high qualifications and experience, funding and a strategic vision plan.

Gopalaswami said, “The applicant has to prove and demonstrate that it has a plan of action ready, that they are prepared in every which way and it is a doable plan. You cannot say that you have identified land, but don’t have possession of the said land or that it is under legal dispute. In each case, we questioned them about their plan and then we made our assessment, whether it is a feasible one or not. The committee then decided that the most feasible of all was only this (Reliance Foundation) proposal.”

The Jio Institute doesn’t get the IoE status right away, but a Letter of Intent, instead, for three years. In this time, it has to achieve all the milestones that it has promised to the EEC and the latter, after a review, will finally award the status to the institute.