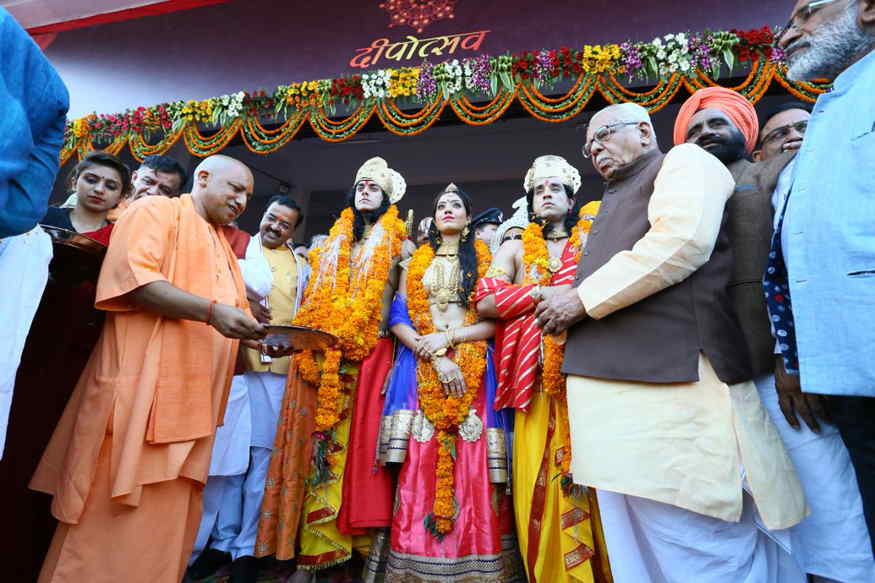 The lead cast of the Ramleela – Ram, Lakshman and Sita – arrived at the function in a government chopper and were coronated by the Chief Minister.

Uttar Pradesh Chief Minister Yogi Adityanath on Wednesday kick started the grand Diwali celebrations in Ayodhya in a bid to “recreate the treta yug Diwali” and to “promote the city as a tourist destination”.

However, critics speculate it to be another event to consolidate Hindu vote bank ahead of the 2019 national election.

The major events on Wednesday included Ramleela performance and lighting of stairs of the Sarayu ghats with more than 1,71,000 earthen oil lamps. By lighting these many lamps the UP government also aimed to set a new world record, reported to be held currently by Gurmeet Ram Rahim’s Dera Sacha Sauda.

In another record of sorts, the lead cast of the Ramleela – Ram, Lakshman and Sita – arrived at the function in a government chopper and were coronated by the Chief Minister.

Reacting to Ram and Sita’s arrival on helicopter, BJP MLA from Ayodhya said, “How can grandest Diwali celebrations in Ayodhya be complete without the use of modern day ‘Pushpak Viman’ (helicopter) that Lord Ram used to reach Ayodhya after victory over Ravan.”

The event was also marked by speeches of the Chief Minister Yogi Adityanath and Governor Ram Naik with frequent chants of ‘Jai Shree Ram’.

“The government has sanctioned Rs 133 crore for Ayodhya. We are making efforts so that Uttar Pradesh becomes tourism hub for India and the world. Ayodhya has taught the lesson on humanity to the world,” Adityanath said.

In his 30-minute long speech, Adityanath also took pot shots at the opposition by calling them “Ravana Rajya based on nepotism”.