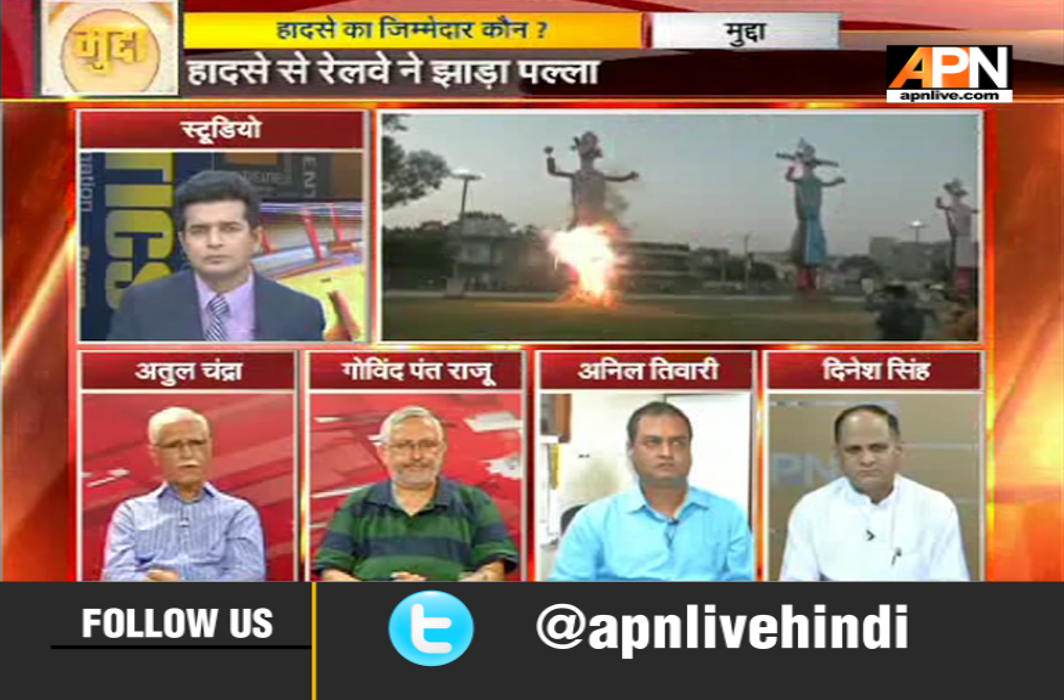 Why did police not remove people from tracks or watch out for train, ask Mudda speaker, adding that convention of not informing authorities must be done away with

On Friday, at least 60 people lost their lives when a train ran over them near Joda Phatak, two kilometers away from Amritsar station, while they were watching the traditional Ravan Dahan ceremony which is the highlight of the Dussehra festival. At least 70 people were injured. Most of the deceased belonged to Bihar and Uttar Pradesh. Twenty corpses are yet to be identified. A magisterial inquiry has been ordered into the incident. The report will be submitted in the next four weeks.

Shockingly, for such a large event, security arrangements were conspicuous in their absence. Saurav Mitthu Madan, the son of Congress MLA Vijay Madan, organised it. Former MLA, Amritsar East, Navjot Kaur Sidhu, was chief guest. She has laid the blame for the mishap squarely at the doorstep of the railways. It is worth nothing that this was the first time the event was being held at the particular venue, yet no permission was taken from the local administration to organise it. Some sections of people are also discontented at Kaur leaving the venue after the accident took place. However, Kaur’s husband, minister Navjot Singh Sidhu, went on record to state that Kaur had visited victims in hospital the same evening. Kaur had told The Indian Express that she had left before the mishap took place.

The police authorities were reportedly informed at the last minute for the security arrangements of Dr Kaur. However, they still did not post personnel for crowd control and crowd safety. But they had information about the event.

There was a five foot wall separating the tracks from the ground. It has been reported that people climbed on the wall and stood on the tracks to watch the show.

Clearly, the government machinery does not have data as to what kind of event should be held at what venue and what scale of security arrangements must accompany each of them.

Congress MP Mallikarjun Kharge has asked for an inquiry as to why such accidents are rising.

MoS, Railways, Manoj Sinha, said as the local administration was not informed, no notice went out to railway authorities regarding the event. There is a blind turn ahead, so the driver could not have crossed a certain speed limit. It is customary to leave to his judgement as to when he would use the horn and where he would slow down. Train speeds on the main line are normally high, and this was the one on which it was travelling. As it was evening, it was too dark for him to see the people on the tracks, leading to the mishap.

Saturday’s edition of Mudda investigated into the causes of the accident. Mr Chaurasia, the anchor, moderated the debate.

BJP leader Dinesh Singh said, “While it is true that revellers should not have been standing on the tracks and taking selfies and videos of the celebrations so recklessly, the organisers are primarily responsible for the tragedy. First of all, they chose the wrong venue. Then, they defaulted on their responsibility of informing the administration. Also, Dr Kaur should have seen that the function she was attending had due authorisations. The fact that no permission was taken is a huge transgression. And it took place at the lowest level of the district administration.”

Journalist Atul Chandra felt that a gap in communication at the level of the district administration as well as between the railways and the government caused the incident.

Anil Tiwari, who is an expert on railways, informed his audience that the driver can’t pull emergency brakes on certain stretches. “It has been seen that the pulling of emergency brakes at the wrong moment has caused train derailments and claimed many lives. It is possible he could not see the blind turn ahead and in the absence of outside information, drove at normal speed, assuming the line to be clear. Prima face I don’t think there is any error on the part of the driver,” he said.

Raju said that informing authorities and seeking due permissions before organising Ravan Dahan is important because firecrackers are burst as part of the celebrations. “It was a large function with a very tall effigy and a lot of explosives being used. Even if there is a longstanding convention for not taking permission for these events, that must be broken. The Ludhiana DRM has said all protocols were followed by the driver. When he saw there were people on the tracks, it was already too late. He still reduced the train speed from 90 kmph to 60 kmph. He could not have used emergency brakes on that stretch. After the mishap had happened, the crowd started stoning the train, so for the safety of passengers he took it to Ludhiana,” Raju said.

Chandra said that if a dignitary attends an event, organisers inform the authorities for the purpose of security. So the local administration was in the know. But it was still callous enough not to inform the railways. “Both the time of the Ravan Dahan ceremony and the train timings were known to all. But Kaur was late because she had to other functions to attend. That’s why the dahan was delayed and it coincided with the passing of the train. Even the police could have posted a battalion there, too, to watch out for the coming of the train. A lot of measures could have been taken,” he said.

Raju said the police should have ensured people were not standing on the tracks.

Tiwari blamed the callousness of the local administration for the accident. Citing the Dhamraghat, Bihar, accident in the month of savan, in 2013, he said that no lesson has been learnt and that the blame game continues between the administration and the railways. He added that since the Sam Pitroda committee’s modernisation advice has been taken heed of and work started, the Anil Kakodkar panel’s recommendations for safety should also be taken into account now.