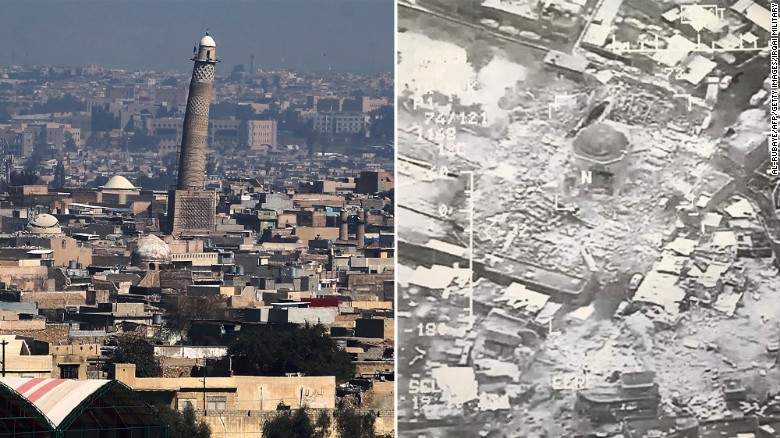 The landmark grand al-Nuri mosque, where Abu Bakr al-Baghdadi announced establishment of “caliphate” in 2014, was destroyed on Wednesday.

There are conflicting reports about who destroyed the historical mosque.  Iraqi Army and US blamed Daesh (IS) for destruction while terror outfit accused a US-led coalition air raid for the blow.

Iraq’s Prime Minister Haider al-Abadi denounced the destruction saying, “Blowing up the al Badba minaret and the al-Nuri mosque amounts to an official acknowledgement of defeat.”

Iraqi Army official leading the Mosul offensive Lt Gen Adulamir Yarallah said, “Our forces were advancing toward their targets deep in the old city and when they got to within 50 meters of the al-Nuri mosque, Daesh (IS) committed another historical crime by blowing up the mosque.”

Commander of Iraqi counter terrorism operations Lt Gen Abdul Ghani al-Assadi said on Wedneday, “We are no more going to drive them out of the old city, (instead) we are going to kill all of them (Daesh) in the coming days.”

US Army Major General Joseph Martin said that the mosque destruction showed IS brutality. “The responsibility of this devastation is laid firmly at the doorstep of IS,” he added.

Earlier on Wednesday, Iraqi forces had claimed to start a push towards the mosque. The US-led coalition is providing air and ground support to the Mosul offensive which began in October last year. On Tuesday, the armed forces had encircled IS stronghold in the old city.

Iraqi Ambassador to India Fakhri al-Issa told APN earlier this year that his government was trying to save Mosul city’s infrastructure, unlike Syria,  as “reconstruction was much more difficult than destruction”.

Coalition spokesman US Air Force colonel John Dorrian denied IS allegation saying “we did not strike in that area”.

Experts believe that destruction of al-Nuri mosque has virtually marked the end of the (Daesh) IS in Iraq. The fall of Mosul would mark the end of Iraqi half of the “caliphate”, the other half being in Syria where vast areas were still under IS control. For IS, Mosul in Iraq was as important for them as Raqqa in Syria.

Abu Bakr al-Baghdadi had reportedly left Mosul to local commanders and is considered to be hiding in the border areas between Iraq and Syria. Coalition forces and other sources have many a time claimed that Baghdadi was killed in the ongoing offensive against the group.

During occupation of vast areas in Iraq and Syria, IS has rampaged through numerous heritage sites in the two countries. IS follows the Saudi-origin Wahabi school of thought, claiming to be a puritanical strain of Islam, which considers all religious shrines idolatrous.

In July 2014, the IS extremists destroyed another landmark in Mosul, the tomb of Jonah, considered to be a key figure in Christianity, Judaism and Islam. The terrorist group was also responsible for destroying iconic Palmyra archeological sites in Syria and Assyrian capital of Khorsabad in Iraq.

No aspects ruled out in case of Sushant’s death probe: CBI