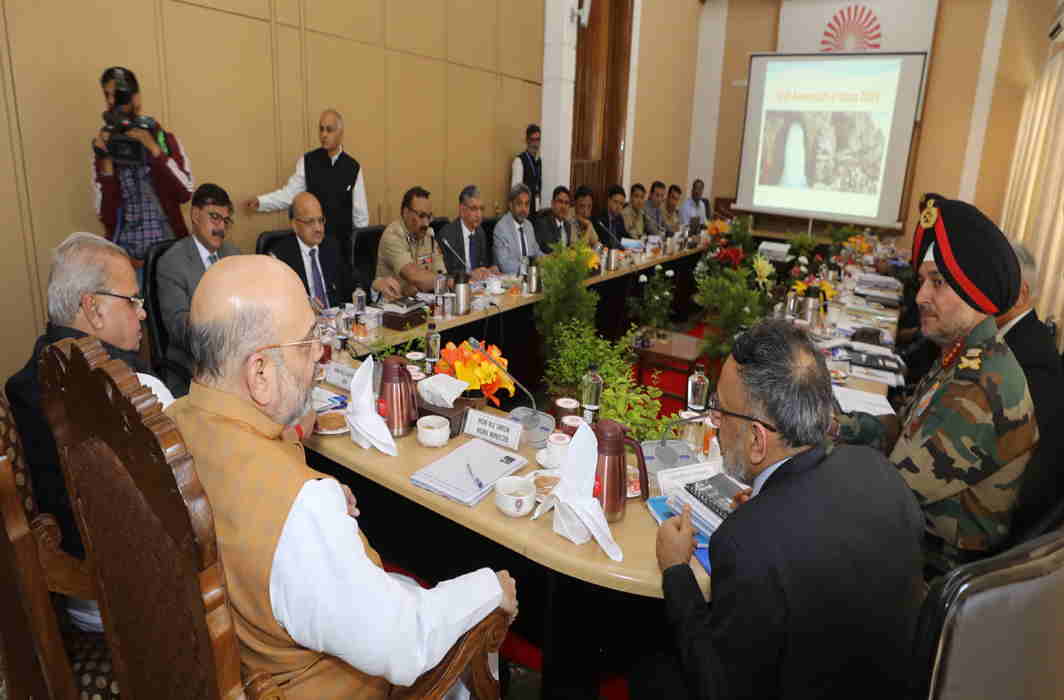 On his first visit to Kashmir as Union Home Minister, Amit Shah today (Thursday, June 27) chaired the unified headquarters meeting of the security grid in Jammu and Kashmir and reviewed the overall security situation in the state, said media reports.

Shah, who landed in Kashmir yesterday on a two-day visit, reviewed the overall security situation in the state with special emphasis on restoration of peace in Kashmir and counter-insurgency operations.

Yesterday the home minister reviewed the security arrangements for Amarnath yatra, which commences on 1 July.Shah laid emphasis on securing the twin routes to the Himalayan cave shrine and preparations to deal with “any natural calamity”, said reports.

Shah is likely to visit the Amarnath cave on Saturday.

He also reviewed the developmental works including the Rs 80,000 crore Prime Minister’s Development Package announced by Narendra Modi for the state in 2015.

Earlier today, Shah, amid tight security arrangements, visited the family of Jammu and Kashmir Police inspector Arshad Ahmed Khan, who was killed in a terror attack in Anantnag on June 12.

Khan, 37, was injured in the terror attack and later flown to Delhi in an air ambulance for specialised treatment. However, he succumbed to injuries at the All India Institute of Medical Sciences (AIIMS). He is survived by wife and two sons, aged four and one.

Five CRPF personnel were killed in the terror attack, in which a lone Jaish-e-Mohammed (JeM) terrorist targeted a patrol team of the paramilitary force.

Another issue that Shah focused on was corruption in the state. He was keen on discussing prevalent corruption and issues of land grabbing in Kashmir, reported ThePrint, quoting sources.

Shah directed the state administration to strengthen the recently established Anti-Corruption Bureau (ACB) to tackle the rising corruption cases. In a statement issued by the state administration and the Ministry of Home Affairs, Shah was quoted as saying, “Newly established Anti-Corruption Bureau should be strengthened. Cases of rampant corruption by the high and mighty should be taken up on priority for fast track investigations.”

Shah asked the state administration and the police force to strictly tackle corruption by government employees as well as malpractices by private entities and individuals, ThePrint reported.

Shah was reportedly apprised of the menace of land grabbing in the stateand  has asked the ACB to take over such cases.

Shah is also expected to meet delegations. He is also supposed to meet families of BJP workers killed by militants.