Home Latest india news Hung assemblies in Nagaland and Meghalaya hold out hopes for a BJP... 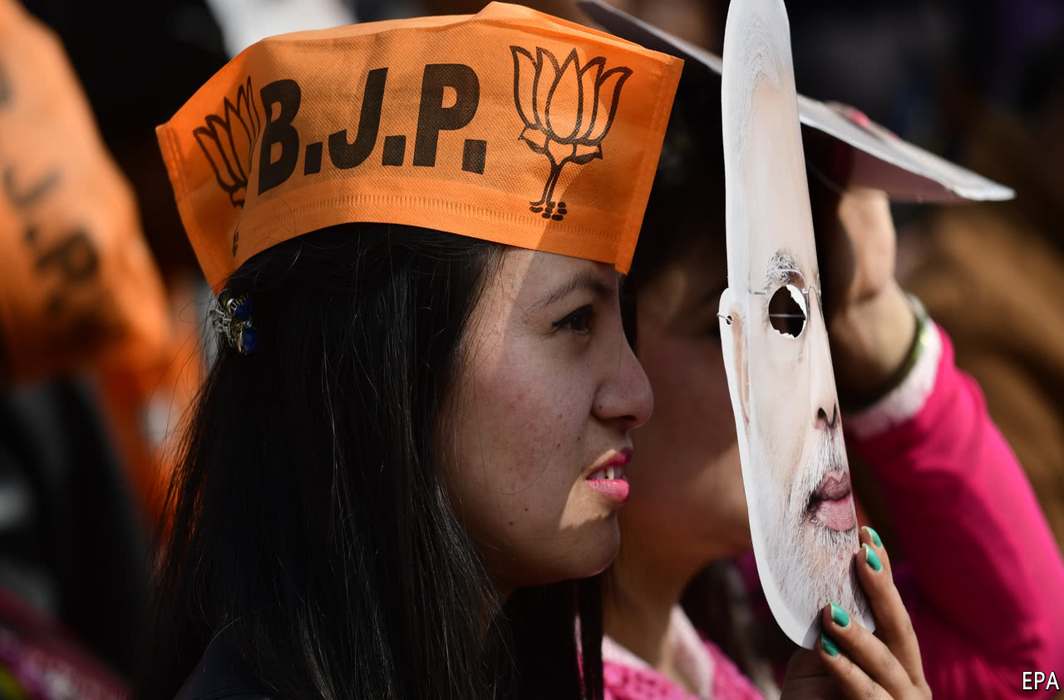 Having swept Tripura, the BJP had made significant gains in Nagaland and Meghalaya, the other two states where assembly elections were held last month (February). Although the BJP with its alliance partner was evenly balanced with its rival in Nagaland, a hung assembly in Meghalaya as well has offered it a chance to be a player in that state as well.

The BJP- National Democratic Progressive Party (NDPP) alliance is looking at possibility of forming government in Nagaland. In the typically curious political scenario of the state, the outgoing ruling party Naga People’s Front (NPF) is also not averse to allying one again with BJP, though.

Senior BJP leader Ram Madhav had landed in Nagaland’s Dimapur, where he was holding meetings at the airport, according to media reports.

The NPF and NDPP appeared to be locked in a close battle for power in the 60-member Assembly. According to the Election Commission website at 6 pm, the NPF was ahead in 26 seats, the BJP in 11 and the NDPP in 15.

Ahead of this year’s elections, the BJP had parted ways with ally NPF choosing to partner with NPF leader and chief minister TR Zeliang’s arch rival and also his former party colleague Neiphiu Rio, who set up a new party in the NDPP. Neiphiu Rio was named the alliance’s chief ministerial candidate.

As results came in today, Zeliang offered to renew ties with BJP. “Election is election. Sometimes we get unexpected results. But we are confident we will get majority along with our allies. We are continuing our alliance (with the BJP), we have not parted at any point of time. I have two ministers in my cabinet from the BJP. Some leaders of the BJP are in touch with us. Don’t know if NDPP will come back.”

“We welcome the BJP if they want to be part of the government,” Zeliang added, claiming that his party is in touch with BJP north east strategists Himanta Biswa Sarma and Kiren Rijiju.

Neiphiu Rio dismissed Zeliang’s claims. “I find it amusing. The NPF had criticised the BJP over the issue of Naga traditions, etc. The BJP will have to decide who their real friends are,” he said.

The NPF concentrated on a regional identity in this election, presenting itself as champions of Nagas. It blamed Rio for creating a situation of instability in the state by forging alliances with the Centre. Meanwhile, the NDPP-BJP alliance tried to take on the role of opposition, calling Zeliang ‘a weak leader’, spearheading the campaign with the slogan “Change is Coming”.

The 2018 Nagaland Assembly elections also gave rise to a debate on the influence of BJP in a Christian-majority state, with the Nagaland Baptist Church Council taking a stance against the party.

The assembly elections held in Nagaland on February 27 witnessed a voter turnout of nearly 75 per cent, reflecting a plunge from the previous 90 per cent in the 2013 assembly elections. Polling was held in 59 of the 60 seats as former chief minister and National Democratic Progressive Party president Neiphiu Rio was elected unopposed from Northern Angami-II A/C after rival Naga People’s Front (NPF) candidate withdrew from the contest.

NPF fielded candidates in 59 seats with the incumbent CM TR Zeliang leading the charge. The party enjoys the support of the National People’s Party (NPP) and the Janata Dal (United). Zeliang had earlier met Governor PB Acharya and submitted a letter of support from the two parties for forming the next government. The letter is crucial in case of a fractured mandate as according to an NPF leader “it was important to communicate to the Governor that NPF also has an alliance” when he decides who to invite first to form the government.

The NPF contested in alliance with NPP, which fielded as many as 25 candidates in its first ballot in the state. The JD(U), which chose to stay away from the alliance initially, fielded 13 candidates. The Aam Aadmi Party (AAP) has for the first time fielded three candidates this year.

The Congress has drawn a blank. The state party president Kewe Khape Therie hit out at CP Joshi for the “lost opportunity” to optimise the ground situation where the “Christian community were all out against the BJP and in favour of Congress ideologies and principles”. Therie alleged that Joshi, who has been the AICC general secretary-in-charge of the Northeast for two-and-a-half years, visited Nagaland only once, and also stopped Congress president Rahul Gandhi from visiting the state.

In Meghalaya, the third north eastern state where elections were held in this round, a hung assembly means the BJP is in with a chance at forming government by tying up with regional parties.

The Congress in Meghalaya was leading in 21 seats, 10 short of the 31 seats needed to form a government.

The BJP, although with only two seats on its own, can stitch up a post-poll alliance together with the National People’s Party (NPP), an NDA ally that contested separately.

Congress is trying to avoid a Goa and Manipur kind of situation where it failed to form a government despite getting the most seats.

While the Congress has dispatched senior leaders Ahmed Patel and Kamal Nath to Shillong, the BJP, with a lead in only 2 states, has deputed Himanta Biswa Sarma to help cobble together an alliance government.

For the BJP, its negotiations will be aimed at establishing a non-Congress government with the help of regional allies like the NPP and the ‘Others’ – UDP, HSPDP and the GNC. In what is touted to be a ‘rare move’, the UDP, HSPDP, and the GNC stitched a pre-poll alliance, with the sole aim to rout the Congress from power.

The National People’s Party (NPP) has emerged as the second largest party with 19 seats. The third largest gainer in the state is surprisingly the category branded as ‘Others’, which consists of smaller regional parties like the United Democratic Party (UDP), Hill State People’s Democratic (HSPDP), the Garo National Council (GNC), the Khun Hynniewtrep National Awakening Movement (KHNAM), the People’s Democratic Front (PDF), and the Independents. Currently, this group is leading in close to 17 seats, in a 60-seat Assembly.

What united the three blocs – NPP, BJP and the ‘Others’ – is their aim to establish a non-Congress government. In comparison, the Congress’ only possible ally, the NCP has won only 1 seat, giving the anti-Congress faction a clear advantage.

The BJP in-charge for Meghalaya Nalin Kohi said that the vote was basically against the Congress and BJP leaders will now look to form a post-poll alliance with the regional parties to form government, according to media reports.

BJP leader and minister of state (home affairs) Kiren Rijiju said that the BJP, UDP and NPP will together form the government in Meghalaya.

NPP is an ally of the BJP at the Centre, Rajasthan and Manipur, but fought the elections in Meghalaya on its own.

Congress may like to try the remote chance of winning it over by wooing its leader Conrad Sangma, ambitious son of former Congress leader Purno Sangma.

The BJP is not likely to let him go, however. If NPP goes, BJP’s government in neighbouring Manipur would also be in trouble since it is dependent for its survival on four NPP MLAs of whom three are ministers.