In Nitish Kumar cabinet, new Deputy CM Tarkishore Prasad gets Finance and IT, other Deputy Renu Devi gets Panchayati Raj 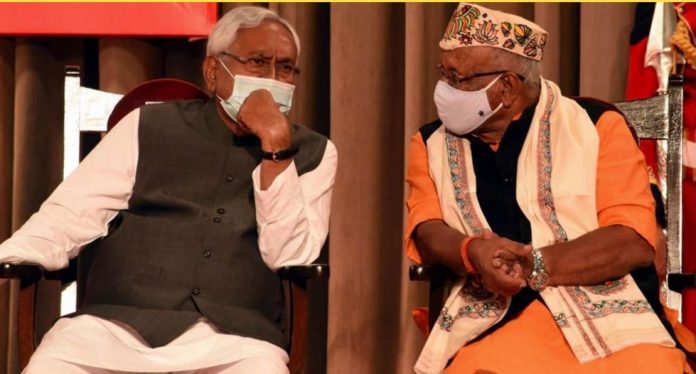 At the age of 69, Nitish Kumar has become the longest-serving Chief Minister of Bihar after winning the election to the 243-member Bihar Assembly. Kumar has kept home, general administration, vigilance and three more departments for himself. New Deputy Chief Minister Tarkishore Prasad has got finance, environment, urban development and information technology while the second Deputy CM Renu Devi got Panchayati Raj, Backward Caste Upliftment and Industry portfolios.

Mukesh Sahni, the only leader of the Vikassheel Insaan Party, has been given the Animal Husbandry and Fishery portfolio and BJP senior leader Mangal Pandey has retained the Health ministry. Pandey has also been the Bihar BJP president from 2013 to 2017. Bijendra Yadav has got Planning, Food, and Consumer Affairs in the new Nitish Kumar cabinet.

Former Assembly Speaker and JDU leader Vijay Kumar Chaudhary got the charge of rural engineering, rural development, water resources, parliamentary affairs, and information and public relations. Mewalal Choudhary will be the new education minister while Sheela Kumari has been allocated the transport ministry.

Jibesh Kumar, who defeated Maskoor Ahmad Usmani by a massive margin from Jale constituency, has been given charge of tourism, mines and labour. Santosh Kumar Suman, the son of former chief minister Jitan Ram Manjhi, has been given the minor irrigation and Scheduled Caste/Scheduled Tribe welfare portfolios, Surat Rai will be the new revenue and law minister of the state.

Nitish Kumar on Monday took oath as Bihar Chief Minister for the fourth consecutive term after edging out the Mahagathbandan in the election to the 243-member Bihar Assembly. The National Democratic Alliance of the BJP, Nitish Kumar’s Janata Dal-United, Jitan Ram Manjhi’s Hindustani Awam Morcha Secular and Mukesh Sahni’s Vikashsheel Insaan Party secured 125 seats. With 74 winning seats, the BJP got an upper hand in the state for teh first time ever while the JDU tally shrunk to 43 from 71 seats earlier, marking its worst performance since the 2005 Assembly polls. NDA allies VIP and HAM(S) secured four seats each. The RJD emerged as the single-largest party with 75 seats while the Congress won just 19 of the 70 seats it contested on and 16 seats were won by the Left parties who contested 29 seats.