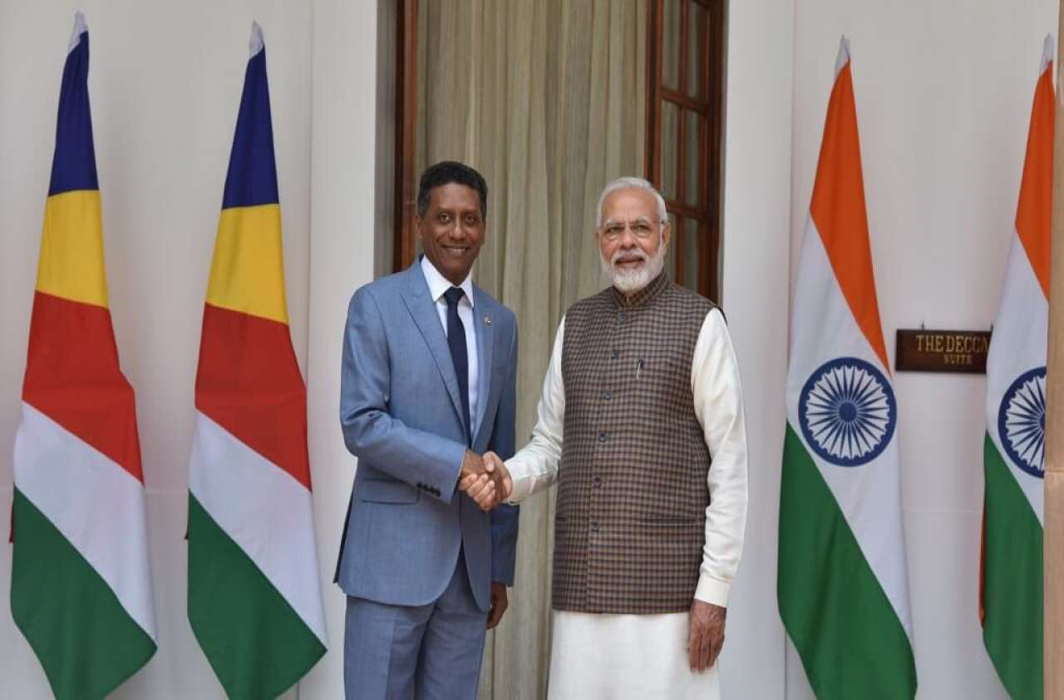 India and Seychelles have agreed to work together to develop a naval base project at the Assumption Island keeping each other’s concerns in mind after talks between Prime Minister Narendra Modi and President Danny Faure on Monday.  India has also announced a $100 million credit to Seychelles for augmenting its defence capability.

While speaking at the joint press conference Prime Minister Narendra Modi said, “I have reiterated India’s commitment towards effective contributions to projects of national importance in Seychelles. These projects will not only help Seychelles’ economy but they will also help to further intensify our mutual relations”.

He further said, “I am happy to announce a credit line of US $ 100 million for Seychelles. From this credit line Seychelles will be able to purchase defence equipment from India to build its maritime capacity. The second Dornier aircraft which I had promised during my visit to Seychelles in March 2015 is ready to be handed over tomorrow.”  The Dornier aircraft will arrive in Seychelles to participate in the National Day festival of Seychelles on June 29, he said.

Faure, who is on his first bilateral visit to India, was accorded a ceremonial welcome at the Rashtrapati Bhavan by President Ram Nath Kovind and Prime Modi Monday morning.

On Tuesday, Minister of External Affairs Sushma Swaraj handed over the Dornier aircraft to the visiting Seychelles President.

Proud testimony of our long-standing friendship! On behalf of the people of India, EAM @SushmaSwaraj handed over HAL made Dornier Aircraft Do-228 to President of #Seychelles Danny Faure. The aircraft will enhance surveillance capability of Seychelles to tackle maritime threats. pic.twitter.com/ttluwjGw8j

Addressing the ceremony Sushma Swaraj said, “Today marks a historic day with the fulfilling of this commitment by handing over of this world class and state-of-the-art second Dornier aircraft to the Republic of Seychelles. It is gift from India ahead of the celebrations to mark the National Day of Seychelles on 29th June”.

She further said, “ I am sure, this aircraft will give a quantum enhancement in maritime reconnaissance and contribute towards keeping the vast EEZ of Seychelles free from maritime threats”.

The Seychelles president had landed in Gujarat on June 22 as part of his six-day India tour and visited the Sabarmati Ashram on Saturday, where Mahatma Gandhi lived between 1917 and 1930. Faure also visited the Indian Institute of Management-Ahmedabad, where he held a meeting with the institute’s director Errol D’Souza.

After visiting Ahmedabad and Goa, he arrived in Delhi yesterday and was received by minister of state for external affairs M.J. Akbar.

Connected by ‘SAGAR’ – Security and Growth for All in the Region”! President of Seychelles Danny Antoine Rollen Faure warmly received by MoS @mjakbar at Delhi airport on his first bilateral visit to India. pic.twitter.com/WSSJeipnUG

The visit comes just days after Faure said that a joint project with New Delhi to develop a naval base at Assumption Island in his country would not move forward. However, the two countries reached an agreement.

Faure, in his remarks, said the Assumption Island project was discussed and the two countries equally engaged to work together bearing each other’s interests.

Seychelles President Faure has been facing criticism at home since that country signed an agreement with India in 2015 to develop a naval facility at the island which would have given New Delhi a strategic advantage in the Indian Ocean Region.

Prime Minister Narendra Modi visited Seychelles in March 2015 when two countries signed four agreements, including MoUs on Renewable Energy cooperation and in the field of Hydrography, a protocol on Sale of Navigational Charts and an agreement on Development of facilities on Assumption Island.

A 45-member Indian army team participated in the 7th India-Seychelles biennial joint military exercise conducted in Mahe during February 2016. These bilateral exercises are being held in Seychelles since 2001.

India has an important link with Seychelles in the form of Indian nationals being the earliest inhabitants of this island, mostly from Tamil Nadu and later from Gujarat, who went there as traders, labourers, construction workers and more recently as professionals. There are more than 10,000 people of Indian origin, which is significant in a country of 96,000 people. In addition there are 11,000 Indians holding Gainful Employment Permits.