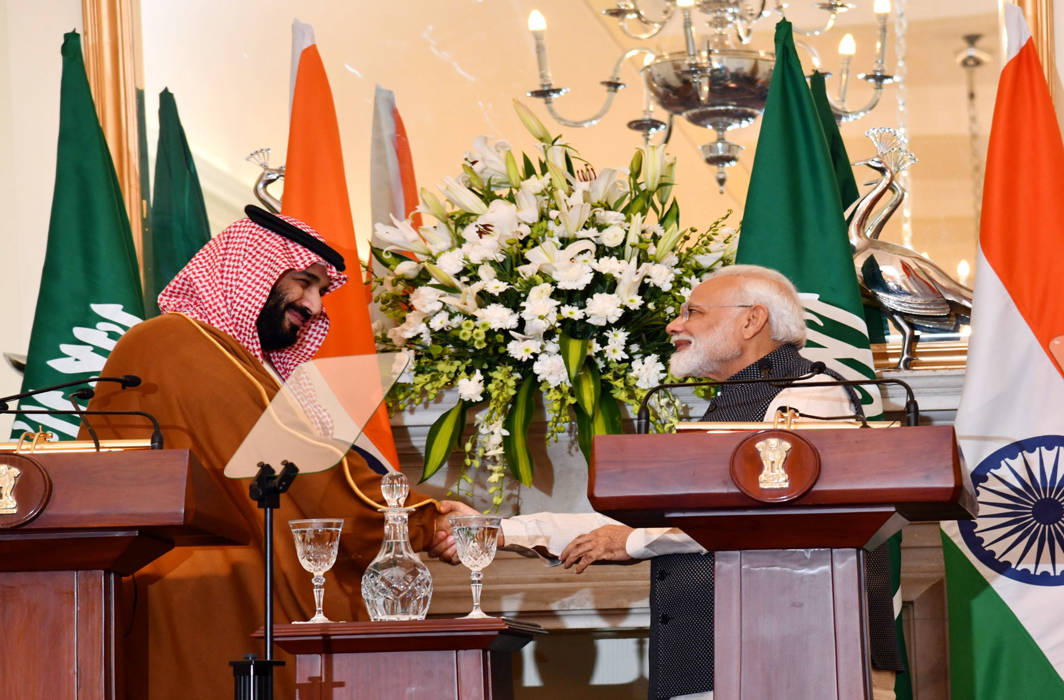 Without mentioning Pakistan, the two leaders concurred that eliminating the infrastructure of terrorism was important to punish terrorists and their supporters.

Arriving after a trip to Pakistan, where he signed deals worth USD 20 billion, Mohammed Bin Salman, or MBS as he is popularly called, received a warm welcome in India. PM Modi broke protocol to personally welcome the Saudi Prince with his usual hug by the steps of the Prince’s plane.

MBS only had to do a token gesture, reportedly on India’s insistence, of first going back to Riyadh from Pakistan instead of coming here directly to satisfy India’s sensibilities.

Addressing a press conference after bilateral talks, PM Modi said, “The barbaric terrorist attack in Pulwama last week is another cruel sign of the world from the anti-humanity threat. To tackle this menace effectively, we agree that there is a need to increase all possible pressures on countries supporting terrorism in any way.”

MBS said terrorism and extremism are a common threat to both countries, adding that Riyadh will cooperate with New Delhi on every aspect, including intelligence sharing. He said: “The common concern is terrorism and extremism. We will cooperate with India and neighboring states to ensure future generations are safe. We applaud India’s role in this matter.” Saudi Arabia, he said, will help India on this front through intelligence sharing.

Not to put too fine a point on it, even Pakistan would have issued such a statement.

India is trying to isolate Pakistan on an international level for harbouring terrorists, including the Jaish-e-Mohammed, which claimed responsibility for the Pulwama terror attack in which 40 CRPF jawans were killed. The government said it has “incontrovertible evidence” of Pakistan’s involvement in the attack.

Saudi Arabia has vowed to “de-escalate” rising tensions between Pakistan and India during the high-profile summit in Islamabad. A joint statement said during the talks, Pakistan and Saudi stressed that “dialogue is the only way to ensure peace and stability in the region to resolve outstanding issues”.

“They also underlined the need for avoiding politicisation of UN listing regime,” the joint statement said in an apparent reference to India’s effort to include list Jaish chief Masood Azhar as a global terrorist under UN rules. Jaish has taken responsibility for Thursday’s attack in Pulwama.

MBS said that ties with India were in the blood of the Saudi people and that his country will invest around $100 billion in India. “We have common goals in the energy, and agriculture and we will diversify this spirit to other sectors. We have also diversified to petrochemical sector in India. Since 2016 we have invested $44 billion in India,” he said.

The visit is the first from the Saudi dignitary who is known for bringing in a different vision to the oil rich economy which is a crucial energy supplier to India. Prime Minister Modi described Saudi Arabia as one of the most valuable strategic partners of India.

PM Modi and the Crown Prince last met in November 2018 on the sidelines of the G20 Summit in Buenos Aires. PM Modi had also visited Saudi in April 2016 and met MBS. He was the Deputy Crown Prince at the time.

From India, Crown Prince Mohammed bin Salman is expected to leave for China. His three-nation tour of South Asia comes five months after a huge diplomatic crisis following the murder of journalist and fierce critic Jamal Khashoggi at the Saudi consulate in Istanbul.