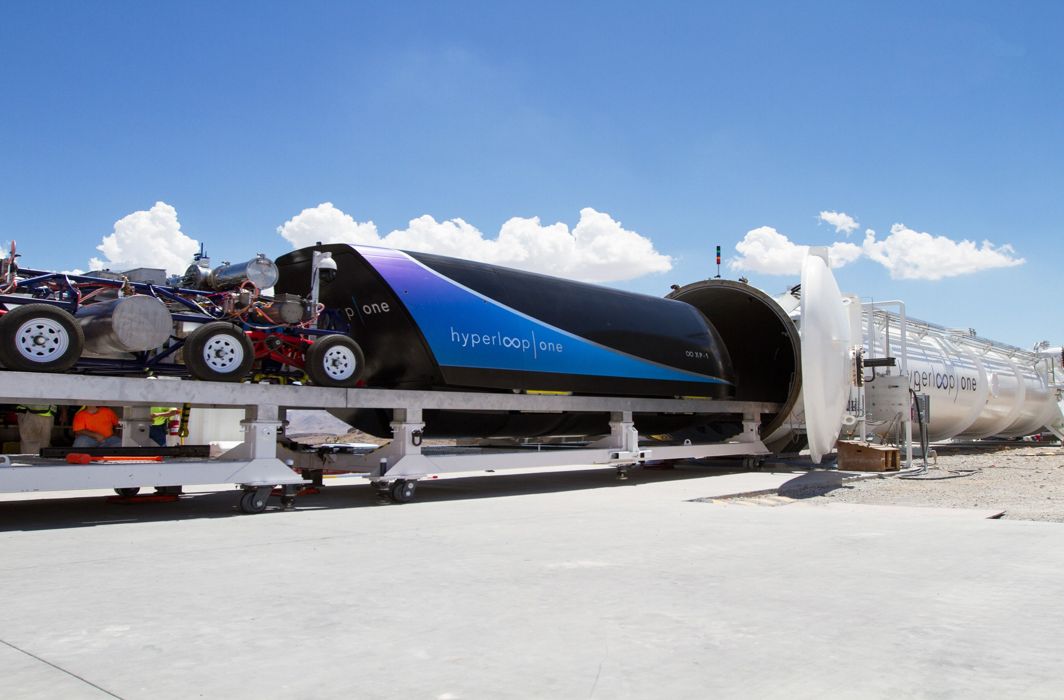 In about a decade from now, Virgin Group founder Richard Branson plans to inaugurate a hyperloop linking Mumbai and Pune, cutting down travel time between the two cities to 25 minutes from the current 55 minutes (by flight, apart from the time taken to get to and from the respective airports) or about 2.5 to 3 hours (by road).

The Framework Agreement to begin the development of the route, starting with an operational demonstration track was signed on Sunday, Feb 18, the first day of the Magnetic Maharashtra Convergence 2018 – a three-day summit inaugurated by Prime Minister Narendra Modi in Mumbai.

Hyperloop would be a transport system in which passengers or cargo would travel in a pod that will accelerate gradually via electric propulsion through a low-pressure tube. According to Sir Richard Branson, Chairman of Virgin Hyperloop One, the company building this system, the pod will then quickly lift above the track using magnetic levitation and glide at faster than airline speeds for long distances due to ultra-low aerodynamic drag, reported Business Today (BT).

The system boasts the capability to travel at speeds up to 1,000 km per hour – just short of the speed of sound (1192 km/hour in dry air).

The technology for Hyperloop One is still in the early stages of commercialisation after the successful completion of the world’s first full scale hyperloop systems test at their DevLoop site outside Las Vegas, US. According to The Economic Times, India could be the first market for Hyperloop One, ahead of the Middle East, Northern Europe and the US, where the company is considering rolling out its service.

“We have always believed that India would be a tremendous market for hyperloop. The Pune-Mumbai route is one of the strongest economic cases we have seen to-date,” said media reports quoting Virgin Hyperloop One CEO Rob Lloyd.

All in all, Branson claims that based on the team’s studies, the hyperloop could result in $55 billion (Rs 3.5 lakh crore) in socio-economic benefits over 30 years of operation. That apart, the 100% electric system could reduce greenhouse gas emissions by up to 150,000 tons annually.

The project will begin with a six-month in-depth feasibility study, which will build upon the findings of the pre-feasibility study signed in November 2017 between the Pune Metropolitan Regional Development Authority and Virgin Hyperloop One and define the route alignment including environmental impact, the regulatory framework, cost and funding model recommendations, etc.

Once this is completed, followed by the procurement stage to determine the public-private partnership structure, the construction of the hyperloop route will commence. The demonstration track will be constructed in two to three years and serve as a platform for testing, certifying, and regulating the system for commercial operations. The second phase will target to complete construction of the full Pune-Mumbai route by 2025. Future projects could also extend the route to link central Pune with the New Pune International Airport and Jawaharlal Nehru Port in Mumbai with Pune’s industrial economic zones.

Said Chief Minister Devendra Fadnavis, “The Pune-Mumbai hyperloop route will be an economic catalyst for the region and create tens of thousands of jobs for India’s world-class manufacturing, construction, service, and IT sectors and aligns with Make in India initiatives.”

According to officials, the project will ultimately be executed by a public-private partnership, which will save taxpayer money. Moreover, Branson claims the hyperloop can be set up at much lower cost than a high-speed rail network. “Price point will be at level of any other alternative mode of transportation. We are not pricing this as something only for wealthy, this will be available to the masses,” he told the media, adding “I believe Virgin Hyperloop One could have the same impact upon India in the 21st century as trains did in the 20th century.”

The company hopes to eventually set up a network, creating “the largest connected urban area in the world by linking nearly 75 million people across the three metropolitan areas” of the states of Maharashtra, Karnataka and Andhra Pradesh”. The Memorandums of Understanding signed with the latter states governments last year to conduct feasibility studies were a step in this direction. If things fall in place, travel between Mumbai, Bengaluru, Chennai, Visakhapatnam, and Amaravati could take place in under two hours in the next decade.

It’s being claimed that the cost of building a hyperloop is much less than building a high-speed railway line for the same distance. Musk originally estimated that a route from Los Angeles to San Francisco would cost about $6 billion, or approx $11.5 million per mile. But leaked documents from Hyperloop One (seen by Forbes) put that cost to $13 billion, or $121 million per mile, said an Indian Express report. Besides that, it still faces technological, regulatory hurdles, and several issues related to ownership of land that could slow down the prospects of setting up a Hyperloop transportation system.