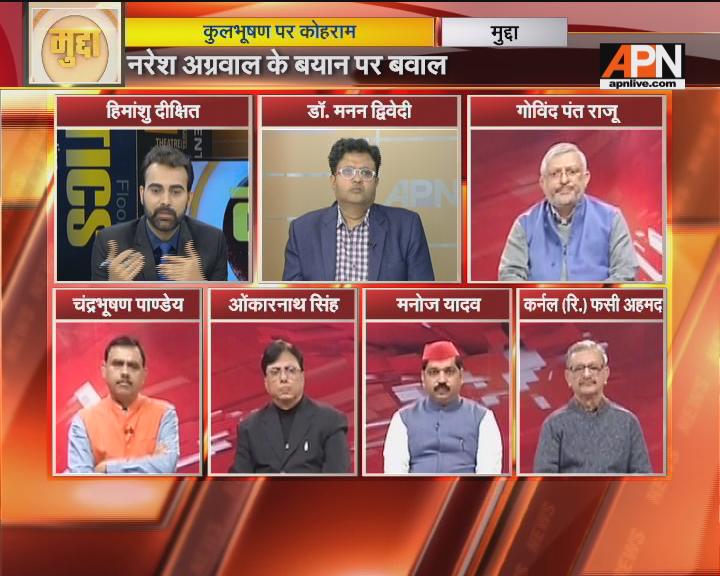 The manner in which Pakistan facilitated meeting between India’s former naval officer Kulbhushan Jadhav and his mother and wife in Islamabad has triggered severe criticism by the Indian government and the people. The matter was being discussed on several platforms including the parliament, media and public chatter.

Pandey, the BJP spokesperson, was critical of the irresponsible statement issued by Samajwadi Party leader Naresh Agarwal, justifying Pakistan’s handling of the Jadhav case. Pandey demanded an immediate apology by Mulayam Singh  and Akhilesh Singh Yadav. He said that Pakistan has lost its credibility right from the very beginning.

Manoj Yadav, spokesperson of Samajwadi Party, said the Government of India is responsible for the slights suffered by Jadhav’s mother and wife. He echoed Agarwal in saying that Pakistan has been treating Jadhav as a terrorist, a notion denied by the Indian government. But at the same time he appeared to criticise Agarwal saying the latter “does not even know what Pakistan’s charge against Jadhav is—whether he is being alleged to be a spy or a terrorist”.

Col Fasih Ahmed, the renowned defence expert, contributed his view. He said that army of any country is the projection of the country’s resolve. He suggested some decisive action be taken against Pakistan.

Dwivedi, the expert on international affairs, said that such incidents project India as a soft state which undermines our national interest.

Style Influencer, Vishal Prajapati isn't thinking back. Having begun his excursion in 2015, Vishal currently has as numerous as 760k enthusiastic supporters on Instagram. This makes him quite possibly the most effective Influencers.
Read more

Six Trinamool Congress MP have been suspended from Rajya Sabha for a day on Wednesday after they created ruckus displaying placards while...
Read more

Delhi Chief Minister Arvind Kejriwal on Wednesday ordered a magisterial inquiry into the gang-rape of a 9-year-old Dalit girl in the Delhi...
Read more