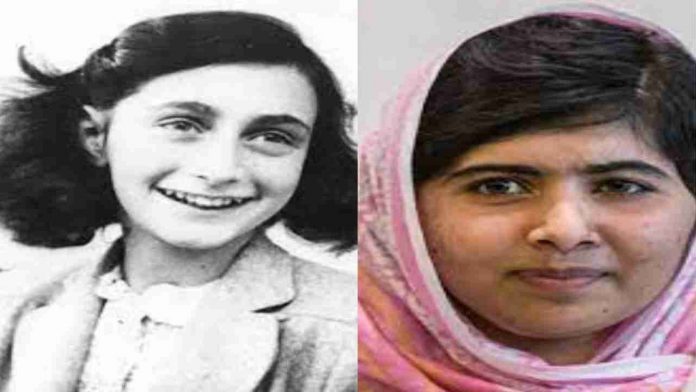 Every year, October 11 is marked as the International Day of Girl Child. The day is widely celebrated to address the issues faced by adolescent girl children. It also talks about creating opportunities for them and empower them in every possible way.

On the occasion of International Day of the Girl Child, we have collated a list of inspiring girls who tried to bring positive changes across the world:

The German-Dutch diarist, Anne Frank, gained popularity followed by the publication of the diary she wrote while hiding from the Gestapo. Her book The Diary of a Young Girl has documented her life in protecting herself during the German occupation of the Netherlands in World War II from 1942 to 1944. However, Frank died at Bergen-Belsen concentration camp in 1945 when her family was arrested. She was only 15.

This American YouTube personality is popular as an LGBT rights activist. Jazz is one of the youngest publicly documented personalities to be identified as transgender. She gave her first interview to Barbara Walters at the age of 6 wherein she enlightened children about being transgender. Jazz has opened up about issues concerning the community on several occasions.

The Candian singer, Capri Everitt, holds a Guinness World Record for most national anthem sung in their host countries in one year. Reportedly, she sang the national anthem in 80 countries between 2015-2016. The aim of her trip was to raise money for orphaned and abandoned children.

Yusra Mardini created history as one of the members of the first Olympic refugee team in Rio de Janeiro at the age of 18. The brave heart saved the lives of her fellow refugees while fleeing Syria. She saved the boat that started to sink by jumping into the Aegean Sea.

The Nobel Peace Prize holder, Malala Yosufzai is a Pakistani human rights advocate who promoted education for girls. At the age of 15 years, she was shot by a Taliban gunman who was attempting to assassinate her.

Facebook
Twitter
Pinterest
WhatsApp
Linkedin
ReddIt
Tumblr
Telegram
Mix
Previous articleThose who are at or near Serena Hotel should leave immediately….: US and UK warn their citizens who are in Afghanistan
Next articleJab paise nahi they to lock nahi karna tha…: Burglars leave note for deputy collector in Madhya Pradesh