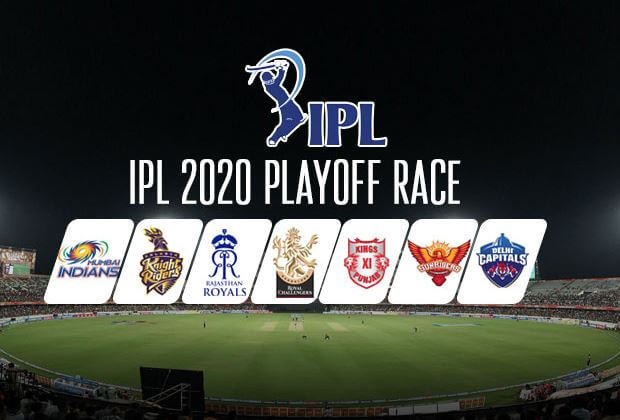 Mahendra Singh Dhoni led Chennai super kings who had already finished their IPL 2020 playoff campaign on Sunday, thrashed Kings XI Punjab by 9-wicket while Kolkata Knight Riders registered 60 run wins against Rajasthan Royals. With this massive defeat Rajasthan have ruled out from the race of playoff. After the match on Sunday, KKR jumped to fourth from seventh with better net run rate.  However Punjab has missed a good opportunity to qualify for the playoff while the KKR have won the game but also improved their net run rate.

After Sunday games, four teams including Royal Challengers Bangalore, Delhi Capitals, Sunrisers Hyderabad and Kolkata Knight Riders are still eyeing on three playoff spots. Three teams have their fates in their own hands while one is at the mercy of favourable results from the remaining two games. Mumbai Indians have already sealed their playoff berth as a top team while Chennai Super Kings, Rajasthan Royals and Kings XI Punjab have been eliminated from the tournament.

Royal Challengers Bangalore: RCB should have a winner against Delhi Capitals on Monday for occupying the 2nd spot in the points table. If lost, the defeat should not be more than 21 runs. RCB should need to stop DC 14 balls to spare. If RCB lose by a bigger margin than the above scenario, they can qualify only if SRH lose to Mumbai.

Delhi Capitals: A win against Royal Challengers Bangalore will ensure 2nd spot and a loss will make things complicated for Delhi. They can qualify even if they lose on Monday by more than 17 runs.   In case DC bat first scoring 160 and lose to RCB with over 2 overs to spare then KKR will go through in the playoff along with RCB and SRH due to their better run rate than Delhi. However, if Sunrisers Hyderabad lost to Mumbai Indians, both Delhi and Bangalore will qualify for the play-offs.

Kolkata Knight Riders: After a 60-run big win over Rajasthan on Sunday, KKR’s destiny is still not in their hands. They can qualify if Sunrisers lose their last match to Mumbai Indians. The loser of RCB vs DC must have a lower net run rate than KKR after the match on Monday.

Sunrisers Hyderabad: A simple win against Mumbai on Tuesday, will book their place in the top 4 due to their superior net run rate. SRH has a better run rate among the four teams who are fighting to book their seat in top four.