IPL 2020: Race for playoffs gets interesting with six teams in contention for three positions 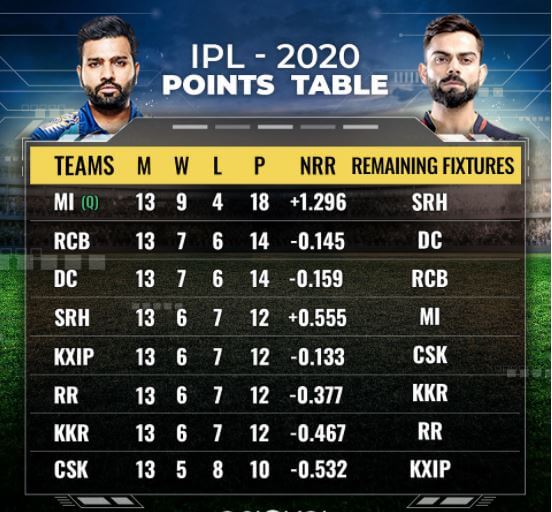 Mumbai Indians thrashed Delhi Capitals by nine wickets while Sunrisers’ Hyderabad registered a big win against Royal Challengers Bangalore in all-important Indian Premier League (IPL) clashes on Saturday. The two encounters have complicated the equation for playoffs even more and has created a more tense situation for the other teams who are eying a berth in the playoffs. According to the latest equation, at least four teams might finish with14 points and the net run rate will decide who manages to make it to the top-four stage of the tournament. Only four matches of the Indian Premier League 2020 are remaining but race between the six IPL teams for three spots is not over yet.

Royal Challengers Bangalore: RCB suffered their 3rd straight defeat on Saturday against Sunrisers Hyderabad who chased 121-run score in just 14.2 overs. Despite this big loss, their chances are still alive for the playoffs. RCB can manage to go ahead with one more loss depending on the net run rate of other teams in the fray. If RCB loses its last game against Delhi Capitals, they will have to pray that SRH and KXIP lose their last games as well to enable it to reach the playoffs.

Delhi Capitals: With back to back five losses, DC are about to be booted out from the IPL 2020. Capitals’ previous losses are pulling them down in the net run rate.  The team has one last chance against RCB to seal berth in the play-offs. After a defeat on Monday, the Capitals would have slim playoff chances due to their poor net run rate than RCB. KXIP and SRH should lose their remaining games and their net run rate should be lower than that of DC to enable the Shreyas Iyer team to reach the next stage.

Sunrisers Hyderabad: SRH are still in the race of playoffs due to their positive net run rate that took them to 4th position from the 7th in the points table after a big win over RCB on Saturday. Two more points against Mumbai will qualify them for the playoffs. A defeat to Mumbai will end their campaign in the tournament.

Kings XI Punjab: After winning 5 out of their last 6 matches, Kings XI Punjab will face Chennai Super Kings in a must-win game on Sunday. After beating CSK, the team will qualify for the play-offs. Punjab’s net run rate is better than RR, RCB, DC and KKR. A defeat against CSK will disqualify them from IPL 2020. They will also be eliminated if SRH, KKR and RR win their final games by a massive margin.

Rajasthan Royals: The encounter between Rajasthan Royals and Kolkata Knight Riders will be a fascinating contest on Sunday. Rajasthan will qualify for playoffs without run rate calculations if KXIP and SRH lose their remaining matches. If KXIP or SRH win their last games, Rajasthan might crash out even if they win against KKR due to their poor net run rate. Rajasthan need a massive win to stay in the race even if KXIP or SRH win their next match. A defeat to KKR will be the end of the road for RR.

Kolkata Knight Riders: KKR have suffered massive losses in the last three games which has dampened their run rate, the lowest among the teams in contention. Even a win against Rajasthan might not be enough for KKR to qualify if either SRH or KXIP win their remaining matches. KKR’s best chance of qualification is a win against Rajasthan and both KXIP and SRH lose their final match. If they lose to Rajasthan, they will be knocked out.