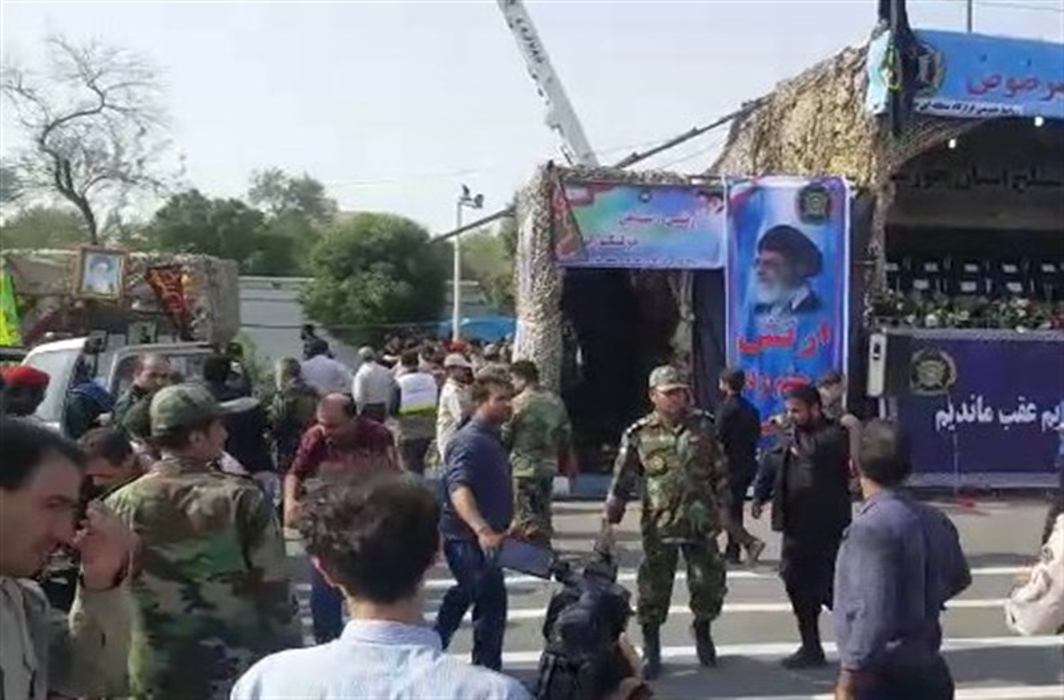 In an unprecedented terror act against Iran’s government, armed militants have attacked a military ceremony Ahvaz, the provincial capital city of Khuzestan on Saturday morning killing at least eight IRGC personnel. Two terrorists were killed while two others have fled the scene.

Press TV reports that at least 20 people, including a child a woman, were injured.

Ramezan sharif, the spokesman of IRGC, said that attackers were affiliated to a terrorist group supported by Saudi Arabia.  “The individuals who fired at the people and the armed forces during the parade are connected to the al-Ahvaziya group which is fed by Saudi Arabia,” he said.

According to Abas Aslani, a Tehran based journalist, eight Islamic Revolutionary Guards Corps (IRGC) personnel have been “martyred” in a terrorist attack. Two terrorists have been killed and two have fled so far.

8 #IRGC forces have been “martyred” in a terrorist attack in #Ahvaz, southwest of #Iran. Two terrorists have been killed & two have fled so far. pic.twitter.com/r9emtYA5df

Terrorists, after opening fire at #IRGC military parade in #Ahvaz, southwest of #Iran, have escaped. Security forces are after the terrorists. State TV reported that the gunmen are “Takfiri terrorists”. pic.twitter.com/rt9sxCincv

In a #terrorist attack in the city of #Ahvaz, southwest of #Iran, some armed men started shooting at a #military parade. Some people have likely been killed & wounded. No exact number of casualties have been reported.

According to Iran’s private Tasnim news agency, the Takfiri militants fired at the participants of the military parade in Ahvaz which was part of the nationwide military parades to mark the beginning of the Iraqi imposed war which was launched by Saddam Hussein in 1980 and continued till 1988.

According to a correspondent of the state television, “Several gunmen began shooting from behind the stand during the parade. There are several killed and injured.”

State media described the assailants as “Takfiri gunmen,” a term generally used to describe Daesh (IS) group, which has been facing extinction from Iraq and Syria.

The moment that #Iran‘s president #Rouhani is informed about the #terrorist attack in #Ahvaz. Rouhani was watching a military parade in #Tehran at that moment. pic.twitter.com/pmeA3GDDiH

IRNA said, “It has been reported that four or five of the elements of the terrorist incident were killed by security and law enforcement forces.”

Fars news gency said that the citizens watching the parade thought that the shooting was inadvertent. “After several people were injured, they realized it is a terrorist attack.”

Aljazeera reports that the state television showed images of the immediate aftermath, showing paramedics helping someone in the military fatigue laying on the ground. Other armed security personnel shouted at each other in front of what appeared to be viewing stand for the parade.

Ahwaz hosts a large number of Sunni Arab Ahwazis who were reportedly being supported by Western and regional Arab governments to raise separatist movement in the region.

Arab separatism in Khuzestan refers to a decades-long separatist movement which seeks to establish a n independent state for its Arab residentsm, from what they define as “Iranian occupation”. The struggle is often defines as an ethno-religious dispute between predominantly Sunni Arabs and the alleged Iranian revolutionary Shia government.

Several Ahvazi activists are based in Europe and Americas who run their own Radio and TV stations beamed into Iranian territories for decades.

According to official IRNA news agency, Iranian armed forces paraded a nationwide ceremony held on the occasion of the 38th anniversary of Sacred Defense (Iraq’s imposed war 1980-1988) on Saturday.

In Tehran, the event was held at the mausoleum of late Imam Khomeini, the late founder leader of the Islamic Revolution in the south of the capital. A number of the senior commanders including Chief of Staff of country’s armed forces Major General Mohammad Baqeri, Army Commander-in-Chief Major General Abdolrahim Mousavi, Commander of the Ground Force of IRGC Brigadier General Mohammad Pakpour and country’s Police Chief Brigadier General Hossein Ashtari were present on the occasion.