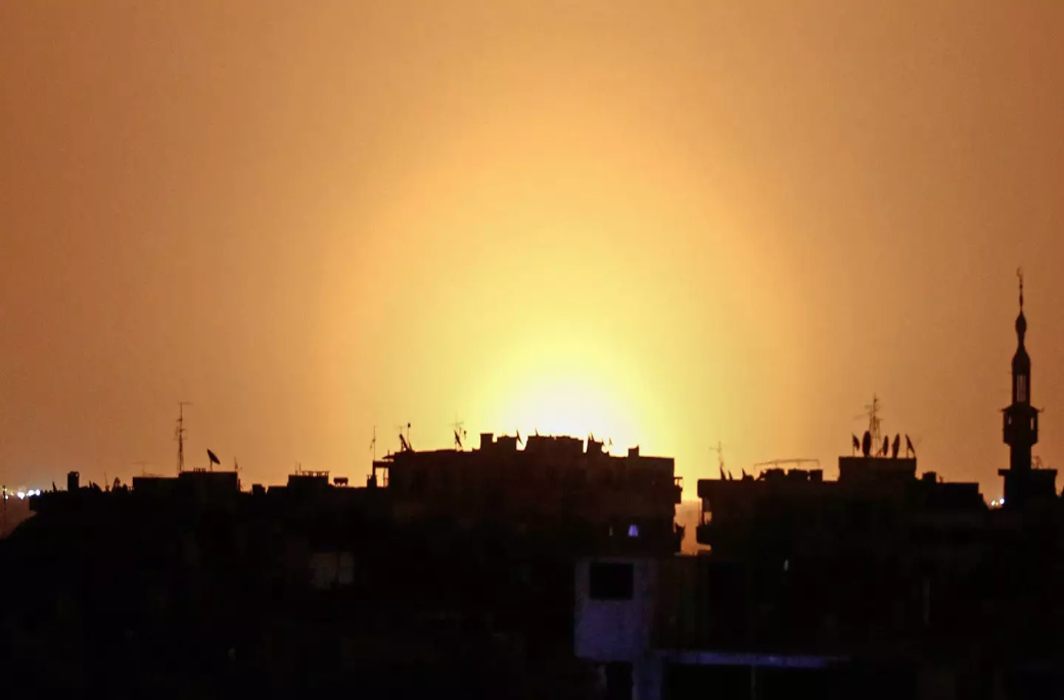 Describing the Israeli missile attack in Damascus the Syrian official SANA news agency reports, “This aggression comes in the framework of the support provided by the Zionist entity (Israel) to the terrorist organizations to raise their collapsed morals due to the big losses inflicted upon the Syrian army over the last few days.”

The daily said that Israel has regularly refused to confirm or deny mounting overnight raids in Syria, but has repeatedly stated that it is unwilling to accept Iranian military presence in Syria. However, Syria denies presence of Iranian army on its soil except military advisors from Tehran.

On Monday, SANA reported from Hasaka, “In framework of the US divulged support to the terrorist groups which aims at prolonging terrorist war on Syria, two helicopters of the US-led ‘International Coalition’ evacuated two of Daesh (IS) leaders from the area of Twimin on the Syrian-Iraqi borders”.

The Syrian news agency quoted sources saying that the airdrop and the evacuation were carried out without any clashes and in coordination and cooperation with the US-backed Qasad groups in the region.

Al-Masdar News reports from Damascus that the US-led coalition has reportedly airlifted two senior IS commanders from a small cillage in the northeast Syria near the Iraqi borders in coordination with the Kurdish allies controlling the area.

It also quoted local sources confirming that the two helicopters of the US coalition landed in Twimin village in order to transport two senior commanders from the Islamic State (IS) terror group to the US base in Al-Shaddadah town, located 127 km northeast of Deir al-Zawr.

The Israeli and US moves came amidst continuing successful fight against Daesh (IS) and other terrorist groups by Syrian forces, supported by Russian Air Force and Iranian military advisors. Israel and US seems to be in close coordination in their efforts otherwise, observers believe.

In September 2017, Syrian foreign minister Walid al-Muallem said the US-led coalition was trying to destroy his country and prolong the armed conflict. He further stated that Damascus would demand the dissolution of the military contingent stressing that thousands of women and children had been killed by coalition airstrikes in Raqqah and Dair al-Zawr provinces.

Syria’s top diplomat further noted that Pentagon was using the coalition to cover up its destruction campaign in Syria. He further asserted that US backed militiamen from the so-called Syrian Democratic Forces (SDF) are fighting Syrian army forces to gain control over the oil-rich areas of the country.

In August last year, London based opposition sponsored Syrian Observatory for Human Rights had reported that US-led choppers had transported four Daesh members and a civilian from a house used as an arms depot in Beqres, a sub-urban area east of Dair al-Zawr to a safe area.

The US-led coalition has been conducting airstrikes against, what they call to be Daesh targets in Syria since September 2014 without invitation or authorization from the Damascus or a UN mandate.