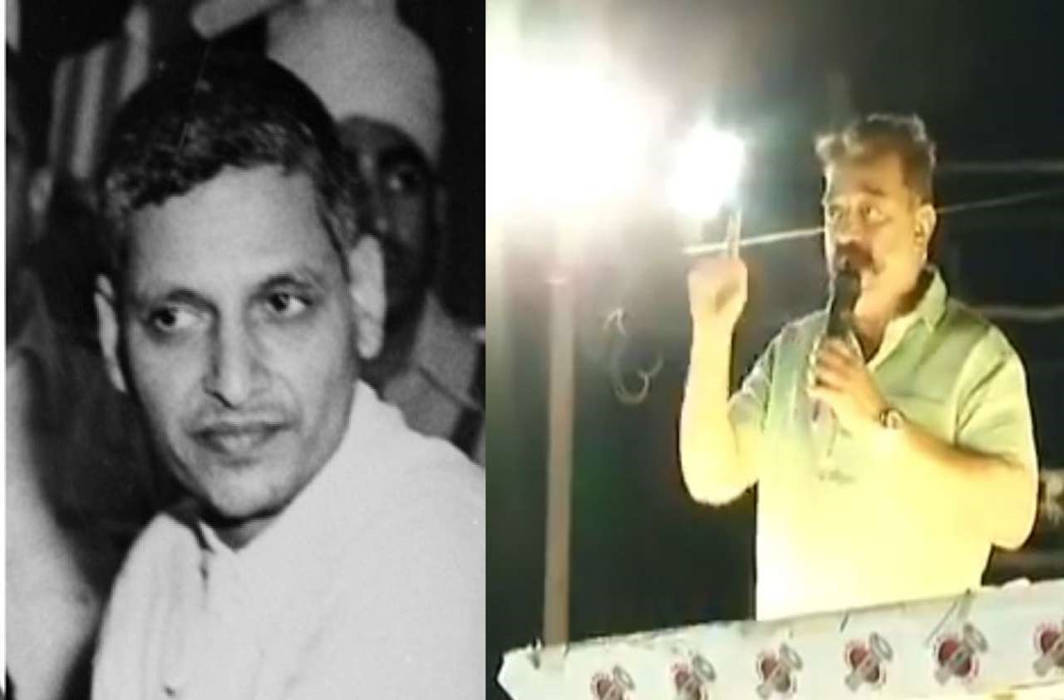 A day after actor-turned-politician Kamal Haasan was booked by Tamil Nadu police for hurting religious sentiments, the Delhi High Court today (Wednesday, May 15) dismissed a petition against him for his remarks on Mahatma Gandhi’s assassin Nathuram Godse saying he was free India’s first terrorist and he was Hindu.

The High Court told the petitioner Ashwini Upadhyay should approach the appropriate forum as the incident took place in Tamil Nadu. Post-dismissal, the court asked the Tamil Nadu Election Commission to consider the petitioner’s representation.

A BJP leader, Upadhyay had moved a PIL before the bench of Chief Justice Rajendra Menon and Justice AJ Bhambhani of the Delhi High Courtseeking directions to the EC to “restrict” misuse of religion for poll gains.

Upadhyay, also a lawyer, alleged Haasan “deliberately” made the statement in the presence of a Muslim majority crowd for electoral gains.The petition contended this was “clearly a corrupt practice under Representation of the People Act (RPA) 1951.”

“As per Model Code of Conduct, no party or candidate can indulge in any activity which may aggravate existing differences or create mutual hatred or cause tension between different castes and communities, religious or linguistic. Similarly, there shall be no appeal to caste or communal feelings for securing votes.

“Haasan has violated the Model Code of Conduct in addition to Section 123(3) of the RPA 1951.Kamal Haasan is deliberately promoting enmity between different groups on the grounds of religion and doing acts prejudicial to maintenance of harmony and brotherhood,which is an offence under section 153A of IPC. It is a deliberate and malicious act, intended to outrage religious feelings of millions of Hindus, which is an offence under section 295A IPC,” it claimed.

It also said that despite the alleged misuse of religion for electoral gain by Haasan, the EC has not done anything in this regard yet.

The High Court’s dismissal of this petition comes a day after Haasan’s party MakkalNeedhiMaiam (MNM) issued a statement claiming that the speech was being circulated with a view to promote enmity amongst people. MNM said the party chief’s speech had “been taken completely out of context with a malafide intent”.

The same day, two days afterHaasan’s statement on Sunday, the Aravakurichi police in Karur district of Tamil Nadu registered a case against him, based on a complaint lodged by Hindu Munnani district secretary KV Ramakrishnan. The case has been registered under sections 153A (promoting enmity between different groups on ground of religion) and 295A (deliberate and malicious acts intended to outrage religious feelings).

A Hindu Sena activist has also moved the court in Delhi, seeking Haasan’s prosecution for allegedly hurting religious sentiments by terming Godse as a “Hindu extremist.” The matter is likely to be listed before a Metropolitan Magistrate tomorrow, May 16.

MNM issued a statement to say, “In the speech, Mr Kamal Haasan was calling for religious tolerance and co-existence amongst all religious groups and condemned extremism in whichever form and religion.”

“This has been taken absolutely out of context and the speech has been painted as anti-Hindu, with a malafied intent. This has created complete confusion and utmost anxiety among many common citizens who are not privy to this larger conspiracy,” the press release read.

Calling for a neutral and fair position on the controversy, the party urged media to play the entire speech in order to vindicate Haasan’s stand and to expose the malicious intent of certain groups.

Haasan’s statement was also condemned by various political parties including BJP, AIADMK and AMMK. On Tuesday, MNM general secretary had also issued a notice calling for the dismissal of Milk and Dairy Development Minister KT RajenthraBhalaji for saying that Haasan’s tongue should be cut for his remarks. Curiously, that statement from the minister was not termed hate speech nor did it invite any legal action.

The party further clarified in the release that while it upheld the rule of law and the courts’ orders, it will continue to voice its opinion in this regard.

Yogendra Yadav of Swaraj India defended Haasan’s statement, pointing out that it was an apt reply to Prime Minister Narendra Modi’s statement, also in an election rally, invoking religion.

Yadav tweeted: “PM asked in Wardha:”Is there a single instance in history when a Hindu committed an act of terror?” @ikamalhaasan has answered: Yes,his name is Nathuram Godse. What’s wrong here? Wasn’t it what we now call terror? Was he not Hindu? What’s the fuss about?”

The MNM chief also found support from AsaduddinOwaisi, the firebrand AIMIM leader. “The one who killed Mahatma Gandhi, whom we regard as Father of the Nation, what do we call him? We call him Mahatma or ”rakshas” (demon)? Call him terrorist or assassin?” he said.

“If not calling the person who killed Bapu as terrorist, what else will you call him?” he told reporters at Hyderabad.

Haasan had said on Sunday that “free India’s first extremist was a Hindu”, referring to Nathuram Godse who killed Mahatma Gandhi.

“I am not saying this because this is Muslim-dominated area, but I am saying this before a statue of Gandhi. Free India’s first extremist was a Hindu, his name is Nathuram Godse. There it (extremism, apparently) starts,” he said in bypoll-bound Aravakurichi.

BJP and AIADMK condemned him for his remarks, though Congress and rationalist outfit DravidarKazhagam backed him.