Home Latest india news Kamal Haasan meets Kejriwal over lunch but no word on his political... 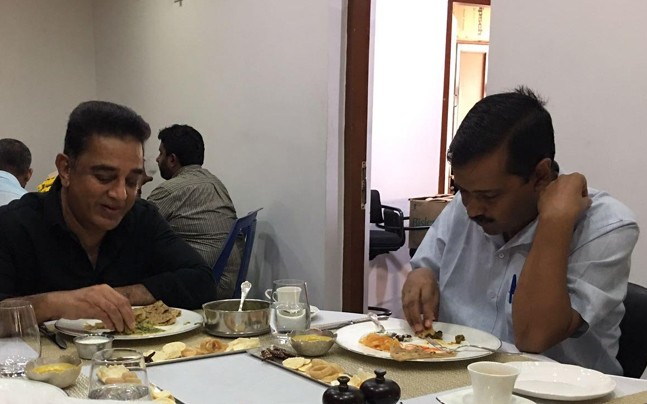 Tamil actor says his meeting with Delhi chief minister was part of a learning curve, wants individual and parties against corruption and communalism to unite

In his ongoing quest to learn the ropes of politics before he can take his much anticipated plunge into the grisly world, Tamil actor Kamal Haasan met Delhi chief minister Arvind Kejriwal for lunch on Thursday.

Ostensibly arranged at the behest of Kejriwal – who is also the national convener of his Aam Aadmi Party (AAP) – the meeting reportedly centered on political discussions but there was no grand announcement in store for those who speculated that the luncheon would end with the actor joining ruling party of Delhi.

Over the past two months there has been much speculation over which political outfit Haasan would join. His recent meeting with Kerala chief minister Pinarayi Vijayan had sparked rumours that the Tamil star was set to join the Communist Party of India (Marxist) but nothing of the sort happened. The principal Opposition party of Tamil Nadu, M Karunanidhi’s DMK too has been courting the popular actor and has even extending its support to his proposed entry in politics but Haasan hasn’t reciprocated the gesture with any finality.

Like his comments after his meeting with Vijayan, which Haasan had said was aimed at “understanding politics”, the actor’s averments following the luncheon with Kejriwal kept his fans and opponents guessing about his political debut.

Insisting that he was currently on “educational tourism, asking anybody who is fighting against communalism and corruption to give me advice on how to go about my endeavour”, Haasan said that he had decided to meet Kejriwal to “have a dialogue on the existing (political) situation” and that their meeting was “more a learning curve for me than for whatever purpose he (Kejriwal) came to visit me for.”

I am very happy that he (Arvind Kejriwal) is here, have discussed issues including corruption: Kamal Haasan in Chennai pic.twitter.com/pnW3wJfJ2P

The actor, who had earlier made it clear that he won’t be joining the BJP by asserting that “saffron is not my colour” said that the reason of his meeting Kejriwal was the “singular purpose of fighting against corruption and communalism”.

The Delhi chief minister on his part said that he had always “been an admirer of Kamal Haasan both as an actor and as an individual” and that the actor “enjoys a reputation of integrity and courage.”

The AAP leader may have flown all the way to Chennai to convince the actor to join his outfit as several of his party’s member had been telling the media to “wait for a big announcement” but he clearly didn’t succeed in this purported plan. All that Kejriwal could say was a reiteration of Haasan’s comments, that “it is important at this point of time in the country, when the country is facing strong forces of corruption and communalism all across that all like minded people should talk to each other on these issues and should try to work in tandem with each other.”

Kejriwal expressed hope that Haasan would join politics soon and said that “we will continue to discuss and meet each other in future,”

Haasan has already announced his intention to join politics and also indicated recently that rather than joining some political outfit, he would prefer to float a party of his own. But evidently, given the actor’s popularity across Tamil Nadu, political parties are going all out to woo the superstar.