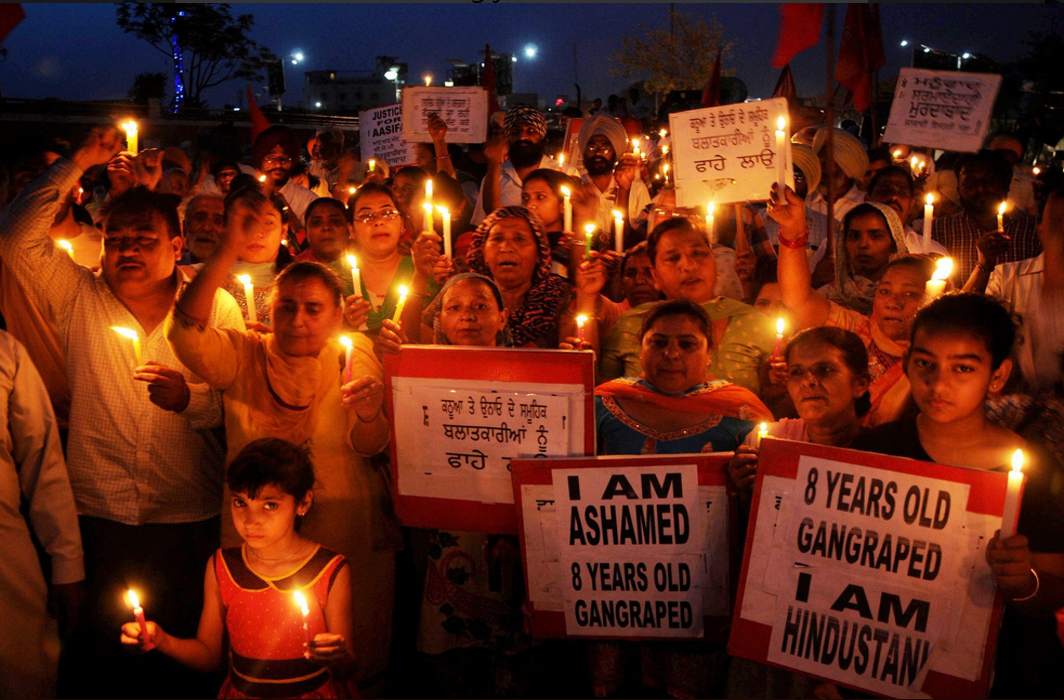 The Supreme Court bench of Chief Justice Dipak Misra and Justices AM Khanwilkar, DY Chandrachud on Monday, April 16, asked Jammu and Kashmir government’s reply on plea for transferring trial in Kathua gangrape case to Chandigarh and directed the state government to provide security to the victim family’s lawyers Deepika Rajawat and Talib Hussain.

Hearing the appeal from the 8-year-old Kathua rape-murder victim’s father who had asked for the trial to be shifted out of J&K, the SC decided to take it up and listed the case on April 27 while making it clear that this will not be treated as a PIL.

Also, it said, “As an interim measure, it is directed that the Jammu and Kashmir Police to beef up the security and provide adequate security personnel to the family, Deepika Singh Rajawat and family friend Talid Hussain.”

The apex court also asked the state police to provide security at the observation home where delinquent juvenile is kept in connection with raping and killing the eight-year-old girl.

As the trial in the case started in Kathua on Monday, the eight accused pleaded not guilty and asked the judge for a narco analysis test, said media reports.  Seven of the eight accused were produced before District and Sessions Judge Sanjay Gupta, who asked the state Crime Branch to give them copies of the chargesheet and fixed April 28 as the next date of hearing.

The seven accused were shifted back to the jail under heavy security immediately after the brief hearing in the sessions court.

In SC, during the hearing, the victim’s father expressed satisfaction over the probe conducted by the state police so far and opposed the plea for a CBI probe as sought by others. Senior advocate Indira Jaising made it clear the victim’s father was seeking transfer of the trial of the case and not the investigation.

She said that the grievance is not the investigation and that she is not asking for any closure in this matter. The issues are grave and that the police couldn’t file the chargesheet for several hours. The lady police officer had to face a lot of trouble while filing the chargesheet.

She said that the atmosphere in that place (J&K court) is such that the “fair trial will become impossible. The petition pertains to the transfer of the case from Jammu and Kashmir.”

She pointed out that there have been direct attacks on the counsel for the 8-year-old’s father. She said that even the investigating officer was told to give up on this case.

She also sought interim protection for the family of the child and the counsel.

The CJI asked: “Suppose, if we transfer the case, will the investigation continue?”

Jaising said various cases have come up wherein the entire investigation is sought to be transferred to the CBI. However, we only demand for the transfer of the trials. The CBI comes in for the investigation only when there is a loophole in the case. The police has a done a god job.

The court also rejected a petition filed by advocate Anuja Kapoor seeking a CBI probe in the case .

A team of five policemen is already with the family of the victim, submits the counsel for the respondents.

Listing the matter for April 27, the bench said that no multiple counsels will be allowed to argue. The CJI made it clear that this matter will pertain only to victim’s family. It’s not a PIL.