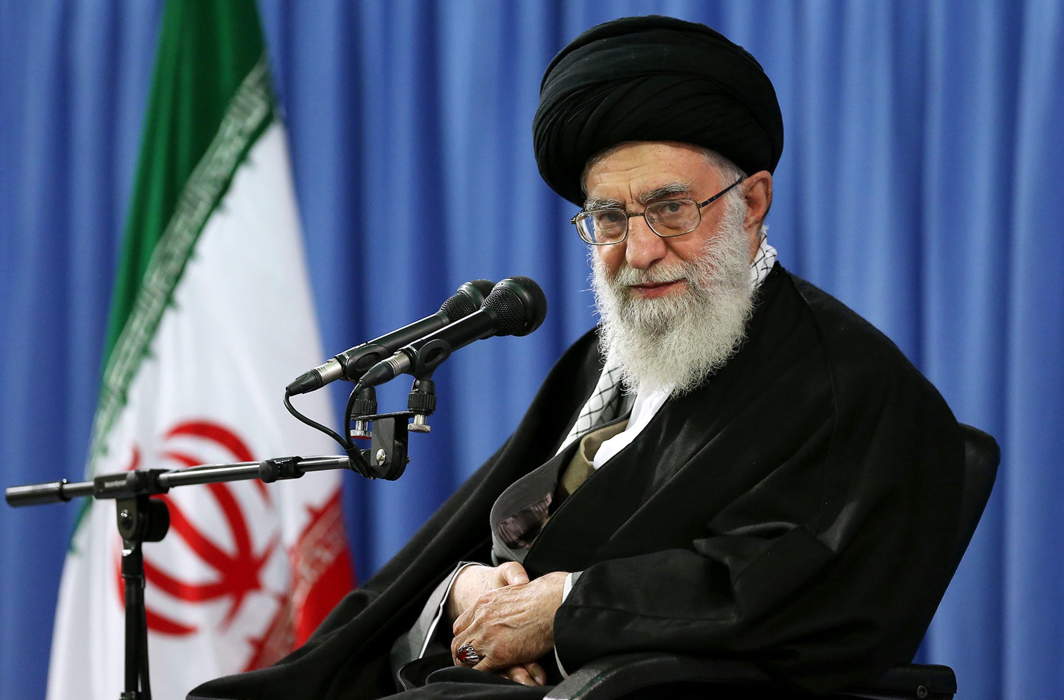 Iran’s most powerful leader Ayatollah Ali Khamenei has said that his country will not enter into new negotiations with the United States “due to cheating and bullying nature of its government”. He has also criticised Iranian negotiators engaged in nuclear deal for not following the red lines, he prescribed.

While addressing a large number of people in Tehran on Monday, Ayatollah Khamenei dismissed talks with the US after President Trump called for direct negotiations with Tehran, saying Washington is only after concessions.

Referring to US President Donald Trump’s withdrawal from a multilateral nuclear deal with Iran Supreme Leader said, “Why should we sit for negotiations with a bullying [and] cheating regime, which negotiates like this?”

Recently, U.S. officials have been talking blatantly about us. Beside sanctions, they are talking about war and negotiations. In this regard, let me say a few words to the people: THERE WILL BE NO WAR, NOR WILL WE NEGOTIATE WITH THE U.S..

The leader noted that according to the American formula, they give promises during negotiations and breach them afterwards. He said that JCPOA was an example of the result of negotiations with America, adding, “Of course, some red lines, which had been set [by the Leader] were not observed in those [negotiations].”

“Even if we ever – impossible as it is – negotiated with the US, it would never ever be with the current US administration,” Khamenei said on Monday.

The Iranian top leader’s remarks came days after US President Donald Trump has re-imposed the first set of economic sanctions after pulling out of the Iran nuclear agreement in May. While withdrawing from the deal Trump had warned to reinstate US nuclear sanctions on Iran and impose “the highest level” of economic bans on that country.

Under the multilateral Iran nuclear deal, signed by five permanent UN Security Council Members: US, UK, France, Russia and China plus Germany, known as P5+1, Iran undertook to put limits on its nuclear program in exchange for the removal of nuclear-related sanctions.

Elaborating on Trump’s offer of direct talks with Iran, Ayatollah Khamenei said, “Of course, they act upon a threadbare and worthless political game in this regard; one of them says [they want negotiations with Iran] without any preconditions, the other one sets preconditions.”

He further said, “Unlike what some people may think in the country, Americans’ request for negotiations is nothing new and has been repeated many times during the past 40 years, but has been met with Iran’s negative answer. Even then American president, Reagan, who was more powerful than the current ones, in the famous case of McFarlane, sent him secretly to Tehran for negotiations, but he returned without any results 24 hours later.”

Khamenei elaborated on how the Americans engage with several countries in dialogue. He said, “They have a special formula for negotiations, which must be understood and then this question must be answered that will any wise person enter into negotiations according to this formula?”

“They firstly clearly set their main goals. Of course, they do not declare all those goals during negotiations, but pursue [realization of] all of them through bargaining during talks. The second point is that Americans do not take one step back from these main goals.”

The Leader noted, “During negotiations, Americans only give promises using apparently assuring words, but want real concessions from the opposite side and do not accept promises.”

He further said, “We experienced this reality in [the case of] the Joint Comprehensive Plan of Action (JCPOA), and Americans resorted to the same method in negotiations with North Korea.”

“In any negotiations, if the opposite side refrains from giving real concessions, Americans will launch such a propaganda and media rancor in the world that the other side feels at loss and becomes passive,” Ayatollah Khamenei added.

Meanwhile Iranian Foreign Minister Mohammad Javad Zarif has said on Monday that United States offer to enter into negotiations with while re-imposing sanctions against the country is nothing but propaganda.

Official IRNA news agency has quoted Zarif saying Aljazeera,”Iran will never change its policies in the region under US sanctions and pressure.”

Earlier he reacted to Trump’s move;

Tantrums & CAPPED TWEETS won't change the fact that the world is sick & tired of US unilateralism. Stopping US trade and killing 100K US jobs is fine with us, but the world won't follow impulsive tweeted diktats. Just ask EU, Russia, China & dozens of our other trading partners.

Read More: Iran: World Is Sick and Tired Of US Diktats

Interestingly, President Trump has not posted any reaction to Iran’s top leader’s statement on his twitter account so far even after more than 20 hours. Generally Trump is considered as one of the most frequently tweeting leader.