Lalu Yadav meets Mulayam Singh Yadav ahead of UP Assembly elections, says country in dire need of equality and socialism

Today the country is in dire need of people's equality and socialism, not capitalism and communalism, Lalu Yadav said. 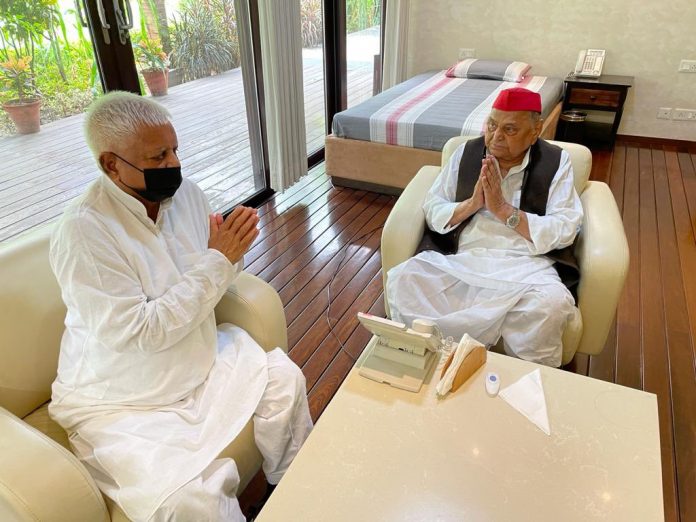 Rashtriya Janata Dal chief Lalu Prasad Yadav on Monday met former Samajwadi Party chief Mulayam Singh Yadav, his son Akhilesh Yadav in New Delhi, reports said. The three leaders have not spoken about the agenda of the meeting but the timing is considered significant as Uttar Pradesh Assembly elections are due in a few months.

However, Akhilesh Yadav and Lalu Prasad Yadav shared photographs of the meeting on their respective Twitter handles.

In a tweet in Hindi, Lalu Yadav wrote: Met the country’s senior-most socialist friend Shri Mulayam Singhji and enquired about his wellbeing. We have common concerns and fight about farmers, inequality, the poor, and the unemployed. Today the country is in dire need of people’s equality and socialism, not capitalism and communalism, he added.

Earlier this year, the Jharkhand High Court had granted bail to Lalu Yadav in cases linked to the Bihar fodder scam. The cases had kept him in prison for three years.

Akhilesh Yadav has repeatedly said that he does not want any collaboration with the Congress and Mayawati’s Bahujan Samaj Party for the Uttar Pradesh Assembly elections in 2022. He said his party would rather join smaller like-minded parties.

He had said the Congress Party is too weak in UP to beat the BJP. Referring to the 2017 defeat, the former chief minister said we did not have a good experience with the Congress in 2017 – we gave them over 100 seats but we could not win.

In the 2020 Bihar assembly election, Congress and the RJD fought elections in an alliance. The Congress contested 70 seats but could win only 19. The Congress ended up with the poorest strike rate in the opposition alliance.

In other India news, Twenty-four self-styled institutions have been declared fake by the University Grants Commission (UGC) and two more have been found in violation of the norms.