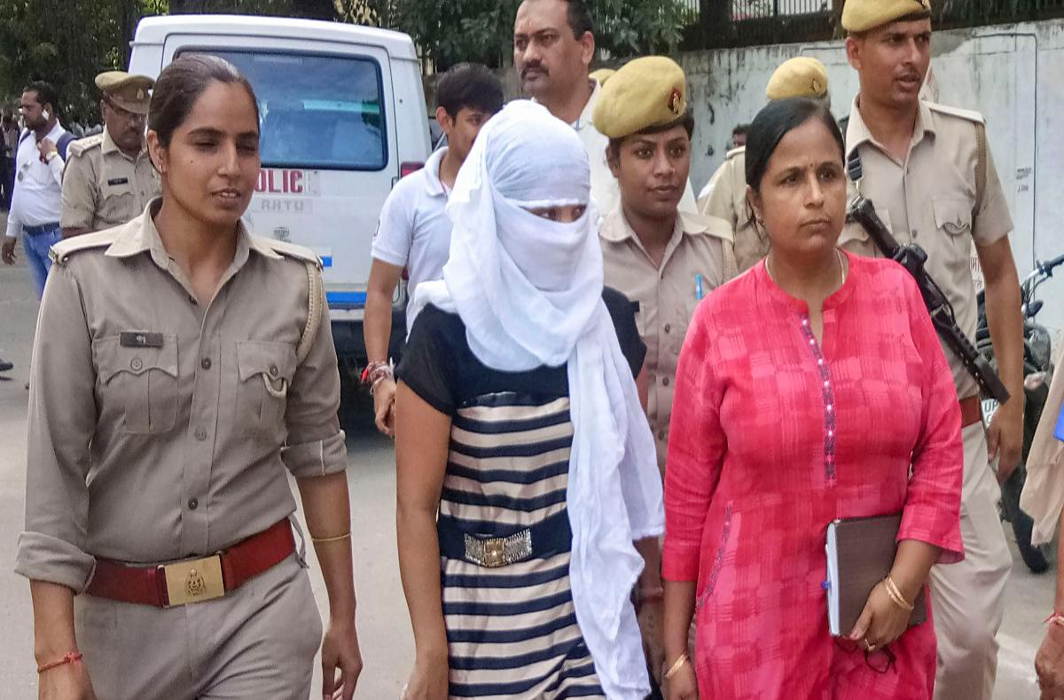 The Special Investigating Team (SIT) of Uttar Pradesh Police today – Wednesday, Sep 25 – arrested the 23-year-old law student who had accused BJP leader and former union minister Chinmayanand of raping her on charges of blackmailing and trying to extort Rs 5 crore from him.

The girl was arrested her from her residence after a brief interrogation. Her family alleged that the SIT arrived this morning and “forcibly dragged her” out of their home. She was later taken for a medical examination.

Chinamayanand, booked under IPC sections 354 D (stalking), 342 (wrongful confinement) and 506 (criminal intimidation), was arrested last week. He had reportedly expressed shame at his conduct. He has been in hospital since Sunday after two days in prison.

The law student had filed an anticipatory bail petition in a local court in Shahjahanpur. Admitting the petition, the court on Tuesday, the court had asked the SIT to file its response to the plea. It had fixed the next date of hearing for Thursday, September 26.

“Anticipatory bail application was filed by the girl in the court of District Judge and it was heard by Additional District and Session Judge Sudhir Kumar, who was today holding the charge of the district judge. The court directed SIT to file its reply with documents related to the case. Without giving any interim protection, the court has fixed September 26 for the next hearing on the application,” said Anuj Kumar, District Government Counsel, Shahjahanpur, according to media reports.

The SIT went ahead with her arrest before the hearing.

“They (SIT) had come to our residence and questioned my sister on her involvement in the extortion case. They asked her how she knew the three men who have been arrested and who hatched the plan to send a message to Chinmayanand to extort Rs 5 crore from him,” ThePrint reported the student’s brother as saying.

“My sister, however, maintained her stand that she was not involved in this at all,” he added.

Chinmayanand’s lawyers had filed a case of extortion attempt against unidentified persons after the 23-year-old, who studied in a law college in Shahjahanpur, run by a trust of Chinmayanand, accused the BJP leader of sexual harassment in a video clip. The student has alleged she was raped and physically exploited for over a year.

Chinmayanand’s lawyers had alleged that a WhatsApp message demanding Rs 5 crore was received on the mobile phone of the BJP leader. The message, they alleged, threatened to make some video clips viral if the amount was not paid.

Three persons, allegedly directly associated with her, were arrested on charges of sending extortion messages to Chinmayanand demanding Rs 5 crore from him. They were identified as Sanjay Singh, Sachin Sengar and Vikram alias Durgesh. The police said all three had confessed to making the extortion calls.

Police have booked he student on the same charge. SIT chief Naveen Arora was quoted in media reports as saying they had “prima facie” found the “involvement” of the law student in the extortion case. While observing that investigation in the matter was still on, he said further action would be taken after the recovery of the mobile phones of the law student and her friend Sanjay Singh, who is the key accused in the extortion case, and other footage.

The SIT was reported as having said that phone call records and digital evidence, including a video and CCTV footage, suggested that the law student too was part of the conspiracy hatched by the three men to extort money from the BJP leader. The student was also seen in a video in which the three men can be seen discussing the extortion attempt, the SIT alleged.

The student had, however, denied these allegations stating that it was an attempt to weaken the case of sexual assault against Chinmayanand. “I do not know if the people who helped me escape from Chinmayanand were using me. I have nothing to do with the extortion case. I think all this drama is being done to dilute my charges of rape,” the law student was reported to have said.

Meanwhile, Uttar Pradesh court has rejected the bail application of BJP leader Swami Chinmayanand, who was arrested in a sexual-assault case. He had during the interrogation on Friday reportedly confessed to having called the law student for “massages” while saying that he was ashamed of his act.