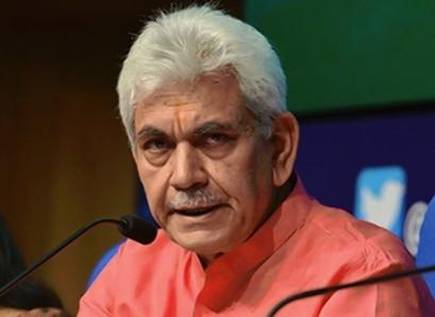 Jammu and Kashmir Lieutenant Governor Manoj Sinha on Saturday announced a relief package of Rs 1350 crore for the union territory in a bid to boost business and the other ailing sectors that have suffered huge losses due to Covid-19, the lockdown, and restrictions in place to curb the spread of the disease.

Sinha announced 50 percent concession in water and electricity bills for a year which will benefit farmers, citizens, businessmen, and others. Sinha said stamp duty exemptions are being extended to March 2021.

Sinha said the government decided to give 5 percent interest subvention to every borrower from the business community, without any conditions for six months in the current financial year which will be a huge relief and help in generating employment in Jammu and Kashmir.

He said the Central government has also decided to extend the maximum limit of Rs 1 lakh to Rs 2 lakh under the credit scheme for handloom and handicraft industry. Sinha, who took over the post recently, said that this is just small piece of his work and it is just a beginning.

Sinha said the government is focusing on setting up a customised Health Tourism scheme with Jammu and Kashmir Bank pitching in with financial assistance for people in the tourism sector with good pricing and repayment options.

The LG said a new industrial policy will be announced soon to revive the industrial sector, which has suffered huge losses after the Central government scrapped Jammu and Kashmir’s special status under Article 370 on August 5, 2019.

This package was announced just days after the Kashmir Trade Alliance (KTA), an umbrella organization of various trade bodies, had earlier stated that businessmen had incurred huge losses due to the coronavirus pandemic and the subsequent lockdowns.