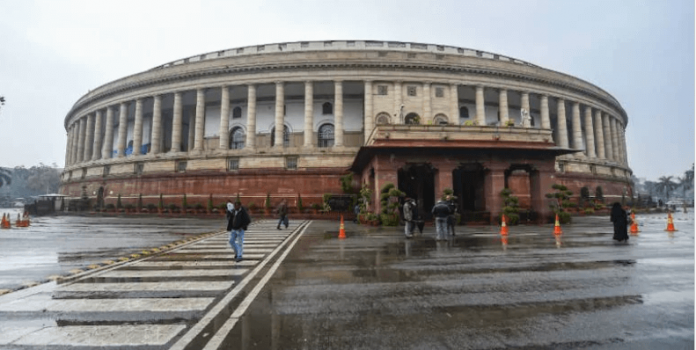 The 18-day monsoon session of Parliament began on Monday with strict Covid-19 protocols in place despite which 56 people, including 17 Lok Sabha MPs, Rajya Sabha MPs and officials, tested positive for the virus in compulsory checks ahead of the session. According to reports, Lok Sabha MPs Meenakshi Lekhi, Anant Kumar Hegde, Parvesh Sahib Singh, Sukhbir Singh Jaunpuria were among the 17 who tested positive for Covid-19 in the Lower House. The BJP had the highest number of MPs found corona positive at 12, the YSR Congress 2, the DMK, the RLP and the Shiv Sena had one MP each testing positive. The remaining 8 MPs were Rajya Sabha members.

In proceedings today, the Lok Sabha adopted a motion to do away with Question Hour and private members’ business during the session. With the scrapping of Question Hour, the Zero House down to half and no all-party meet ahead of the session this time, the House met for the first of its four-hour sittings today, the Rajya Sabha will convene for 4 hours later today in a bid to stagger timings. Further, Parliament will function on all seven days of the week.

Instead of Question Hour, only written questions and answers will be allowed. Congress MP Adhir Ranjan Chowdhury attacked the government calling the doing-away with Question Hour as an attempt to strangulate democracy. The Question Hour was the golden hour but the government informed that it can’t be held this time, he said in the Lok Sabha.

Questions that required written answers were tabled and answered by the government. Former Congress president Rahul Gandhi, who is abroad with mother and Congress interim president Sonia Gandhi for her annual check-up, asked a written question on whether the PM CARES Fund was a public authority under the ambit of the RTI Act. The government answered in a single word, “no”.

Some 11 bills that are to replace ordinances issued since March, when Parliament was adjourned indefinitely in view of the pandemic, are expected to be cleared. On March 24, Prime Minister Narendra Modi announced the first countrywide lockdown. At least seven union ministers have contracted the disease and two dozen lawmakers are recovering from it. Ahead of the session, all members were requested to get themselves tested for Covid-19, including Home Minister Amit Shah who underwent tests recently at AIIMS.