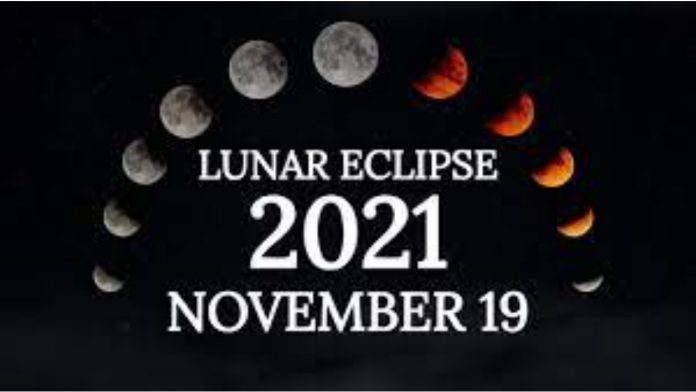 According to the National Aeronautics and Science Administration (NASA), the longest partial lunar eclipse will occur on 19th November after 580 years. This will be visible directly in some parts of North-East India. Parts of the US, Australia, East Asia and South America will also witness this lunar eclipse.

A partial lunar eclipse happens when the Earth comes between the Sun and the Moon but not in a straight line. A little portion of the moon is obscured by the Earth’s shadow, creating a reddish Moon.

According to NASA, the eclipse will last for about 3 hours 28 minutes and 23 seconds making it the longest eclipse of the 21st century and the longest in the last 580 years. Partial lunar eclipse 2021 will take place on 19th November in India at 2:34 pm.

Where to watch Lunar Eclipse 2021?

In India, Arunachal Pradesh and Assam will be able to witness the partial lunar eclipse with their naked eyes whereas the penumbral eclipse will be visible from UP, Bihar, Jharkhand, West Bengal and Odisha as well but the visibility from these places will not be for long.

The penumbral eclipse means when the Moon is in the Earth’s outer shadow, the eclipse will last for over six hours.

The eclipse will also be visible in all parts of the US and parts of Australia, East Asia and South America as well.

Here are a few tips regarding what to eat, what to do and what should you avoid during Lunar Eclipse 2021.

It is always recommended to not do oil massage, comb your hair, brush your teeth. Try avoiding eating and drinking food and water during the Sutak period. However, kids, sick and old people can eat during Sutak if required.

Pregnant women must do extra care about themselves during the eclipse. They are strictly advised to not venture out as it is believed that exposure to a contaminated atmosphere might affect the baby’s health and the chances of miscarriage can also increase.

It is also recommended to add Tulsi leaves or Kusha grass in the containers of food items like- wheat, rice, pickles, cereals. You can also add these leaves to milk bowls and water bottles.

Mantras to chant during Grahan

Hawking is mainly known for his theories on black holes. He revolutionized the modern physics with his theories on origins and mechanics of the universe. His intellectual and curiosity about new things, earned him a nickname Einstein.
Read more
Education

Gemenids Meteor Shower 2021: From date, time to how to watch celestial light show from India, here’s all you need to know

Geminids Meteor Shower were first spotted in the mid-1800s and have been rising in intensity ever since. Know about its timings, date and how to watch the celestial light show.
Read more