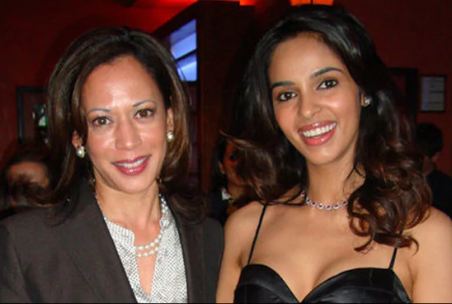 Bollywood actor Mallika Sherawat long ago predicted the victory of vice president Kamala Harris in the US presidential election. A tweet from 2009 is doing rounds on the internet in which the actor had predicted Harris to-be-US president.

As Harris became the first-ever woman vice president of the United States of America, an old tweet of Harris with Mallika Sherawat rediscovered by a twitter user started going viral.

Back in 2009, Harris was District Attorney of San Francisco when Sherawat met her at a party. Talking about their meeting in her tweet, the actor had described Harris as a woman who could be US president.

Sherawat visited the US to research her role for the film Politics of Love in 2009. It was during that time, she met Harris. In 2010, the actor also posted a picture with now vice-president, crediting her as the inspiration for her role in the film.

with Kamala Harris, attornry general of San Francisco. I was inspired by her for my role in Politics of Love…

In the film, Sherawat essayed the role of an Indian-American, Democratic campaign worker who fell in love with a Republican. The romantic comedy drama is helmed by William Dear. Brian J.

Meanwhile, Harris is also the first Black woman and first woman of Indian origin to become the US vice president during the election this year. Since 2017, the 56-year-old woman has served as the junior US senator from California. Alongside President Joe Biden , Harris will assume office from January 20, 2021 in the US.

Sherawat is best known for bold roles in Bollywood films like Murder, Khwahish and Welcome. Her acting was critically appreciated in romantic comedy Pyar Ke Side Effects. She last appeared in a role of a walking ghost in web series titled Boo Sabki Phategi.