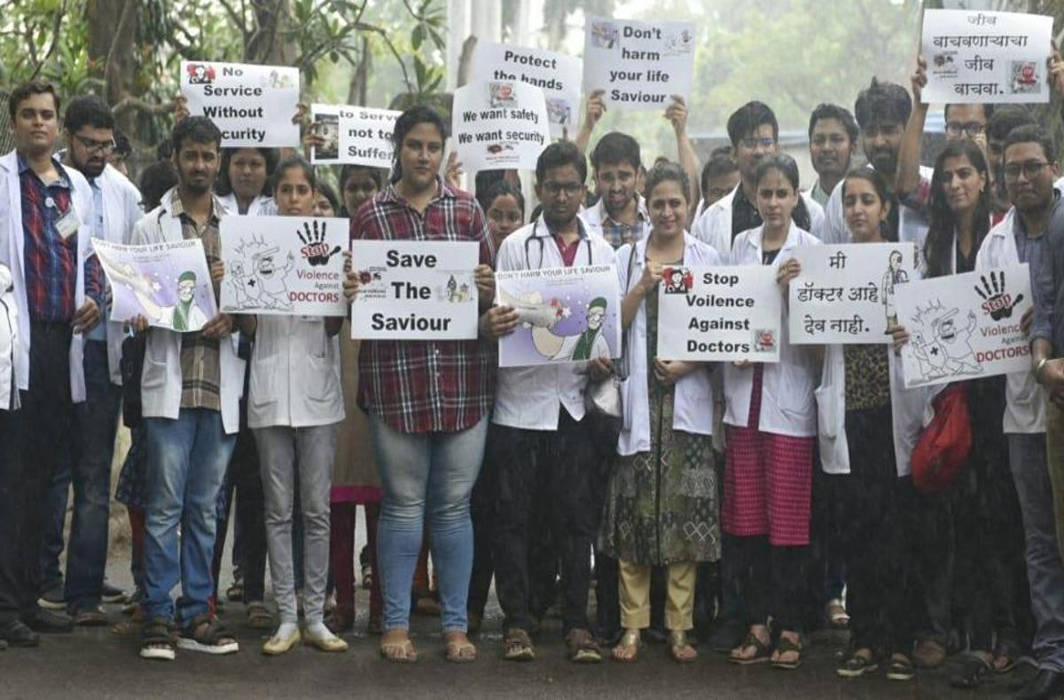 While the opening of emergency ward at Nil Ratan Sircar (NRS) Medical College and Hospital provided a modicum of relief to those in urgent need of medical attention, West Bengal faced a mass resignation of doctors today (Friday, June 14) expressing solidarity with protesting doctors at NRS Medical College.

The doctors’ protest in Bengal found support from far and wide. Doctors across India took to the streets and halted medical services in support of the nationwide protest today to demand protection amidst the ongoing strike by the junior doctors at NRS Medical College and Hospital in West Bengal. In Delhi, scores of doctors at several government and private hospitals in Delhi held demonstrations on Friday by boycotting work, marching and raising slogans.

The resignations have come from mostly cardiology, dermatology and medicine departments of the institute.

There were reports that about 67 doctors at Suri Hospital in Birbhum district have tendered their mass resignation. In North Bengal Medical College and Hospital, five doctors from the psychiatric department including head of the department Nirmal Bera have tendered their resignation. There were also reports that resident medical officers at SSKM Hospital also resigned.

Meanwhile, doctor Kunal Saha filed a petition before the division bench of the Chief Justice of Calcutta High Court seeking the court’s direction to end the present crisis.

Eminent personalities and city-based intellectuals expressed their solidarity with the protesting junior doctors at NRS and paid them a visit.

Actor-director Aparna Sen urged chief minister Mamata Banerjee to visit the doctors at NRS and ensure their security. “We know you (doctors) don’t see the religion of any patient before providing them treatment. I know that you are suffering. We have to find a way out from this crisis and I have come here as a citizen to express my solidarity. I will appeal to Mamata Banerjee that she is not only the chief minister of the patients but also of the doctors. You have the responsibility to provide them security. You should come here and talk to them,” she told the protesting doctors.

Actor Koushik Sen, social activist Bolan Ganguly and others too went to NRS. Sen slammed the state government for not providing adequate security to the doctors but spending money to organise festivals across the state.

The junior doctors at NRS went on a strike on Tuesday demanding security at OPD and emergency wards, a day after the family of a patient allegedly attacked two interns. The protests soon spread to state-run medical facilities across the state. On Thursday, the agitating doctors defied Mamata Banerjee’s ultimatum to return to work by 2 pm and continued with their protest.

The CM, who visited the state-run Seth Sukhlal Karnani Memorial Hospital (SSKM) hospital on June 13 in the wake of disruption of medical services in several parts of the state, had asked agitating junior doctors across the state to resume work within four hours and warned them of action if the order is not followed.

Ignoring her warning, the junior doctors carried on with their agitation.

Emergency services were available at one or two hospitals, including Nil Ratan Sircar (NRS) Medical College and Hospital, according to PTI.

Meanwhile, a three-day-old boy died on June 14 because he reportedly did not get the ventilation service due to the strike. “My baby died due to the strike,” Ananda Bazar Patrika quoted the mourning father as saying. “Tell me what his mistake was,” added the father.

The junior doctors have been agitating since June 11 demanding security for themselves in government hospitals, after two of their colleagues were attacked and seriously injured allegedly by relatives of a patient who died at the NRS Medical College and Hospital.

The spokesperson of the joint forum of junior doctors, Dr Arindam Dutta, told PTI that demonstrations will continue till their demands are met.

The doctors’ stir resonated across the country. The resident doctors at Raipur’s Dr Bhimrao Ambedkar Memorial Hospital raised slogans on the streets in protest against the incident in Kolkata.

Doctors at North Bengal Medical College in Siliguri have also joined the strike as have the medical practitioners affiliated with Maharashtra Association of Resident Doctors (MARD). The doctors of AIIMS Delhi meanwhile halted health services leading to inconvenience to thousands of patients. The Resident Doctors’ Association, Safdarjung Hospital also took out a protest march in the morning.

In cities like Jaipur, doctors have carried on with their duties wearing black bands as a mark of the protest, the members of Indian Medical Association, Trivandrum, on the other hand, held protests over the alleged violence.

Doctors with ‘Save the Saviour’ and ‘Stand with NRSMCH’ protested at the Government Medical College in Nagpur.

In Delhi, doctors at some government and private hospitals in Delhi came out in support of their colleagues in Kolkata today to hold demonstrations.

A group of doctors also met Union Health Minister Harsh Vardhan and apprised him of the demands of the medical fraternity to ensure safety and security of doctors in face of any violence in hospital premises. Vardhan has assured the doctors that he will look into their demands.

Doctors under the banner of the Resident Doctors’ Association (RDA) held out marches in the AIIMS campus Friday, with many wearing bandages on forehead or helmets. Doctors at Centre-run Safdarjung Hospital and Lady Hardinge Medical College and Hospital also joined the protest.

The resident doctors associations of GB Pant and Guru Nanak Hospital, associated with the Maulana Azad Medical College have also joined the protest.

Condemning the violence in West Bengal, the AIIMS RDA had on Thursday urged resident doctors’ association to join the token strike.

As scores of doctors began the strike for a day, healthcare services at private and government hospitals in the national capital are being affected.

There is a shutdown of out patient departments (OPDs), routine operation theatre services and ward visits, except emergency services in several hospitals of the city.

In the wake of the strike, the AIIMS has instituted contingency measures to take care of the patients admitted, including those in the ICUs and wards.

The AIIMS medical superintendent had on Thursday put out a memo stating that as part of contingency measures, OPD services will function in a restricted manner till normalcy is restored.

Only follow-up patients with prior appointment will be registered in the OPD, while registration of new patients will be done as per availability of faculty, it said.

Routine operation theatre (OT) services will remain suspended and only emergency cases will be taken up for surgical operations. Diagnostic services will also function in a restricted manner, the memo stated.

Resident doctors at the AIIMS and Safdarjung Hospital had on Thursday worked with bandages on their heads in a symbolic protest.

The AIIMS RDA had also decided to observe a ‘Black Day’ on Friday to protest against the assault on doctors in West Bengal. The Delhi Medical Association (DMA) observed a “Black Day” on Thursday against the brutal attack and had declared an absolute shutdown on Friday.

The DMA executive stated that the organisation is ready for an agitation to press for strong legislation and strict action against violence at hospitals.

The Indian Medical Association (IMA) had directed the members of all its state branches to stage protests and wear black badges on Friday.

In a communique to all its state presidents and secretaries, the IMA has asked them to organise demonstrations in front of the district collectors’ offices from 10 am to noon on Friday and hand over a memorandum addressed to the prime minister to the collectors in every district.

The IMA has also urged its state branches to pass on the information to government doctors’ organisations of the states and request for their support and issue a press statement to this effect.

Taking note of the ongoing nationwide strike over violence against doctors in West Bengal, Union Health Minister Harsh Vardhan on Friday appealed to the Chief Minister of the state, Mamata Banerjee, to not make this an issue of prestige. He also assured doctors that the Central government is committed to ensuring their safety.

“I appeal with folded hands to West Bengal Chief Minister Mamata Banerjee to not make this an issue of prestige. Despite getting beaten so badly, doctors only asked her to provide them adequate security and take action against all those behind this as per the law. But, she didn’t do this and gave an ultimatum to the doctors after which doctors of West Bengal and across the country got angry and went on strike. If the Chief Minister changes her attitude, then patients will not suffer across India,” Harsh Vardhan told ANI.

The Calcutta HC today gave state government seven days to reply to a PIL regarding the strike by junior doctors in the state. Division bench headed by Chief Justice TJ Subramanium heard the matter. The court asked state and steps taken by the government to end the impasse. It further said that the state government has to find a solution and end this deadlock.

It refused to pass any interim order on the strike by junior doctors. The Chief Justice, during the hearing of a Public Interest Litigation (PIL), reminded the striking doctors of the ‘Hippocratic Oath’ they take to ensure the welfare of all patients.