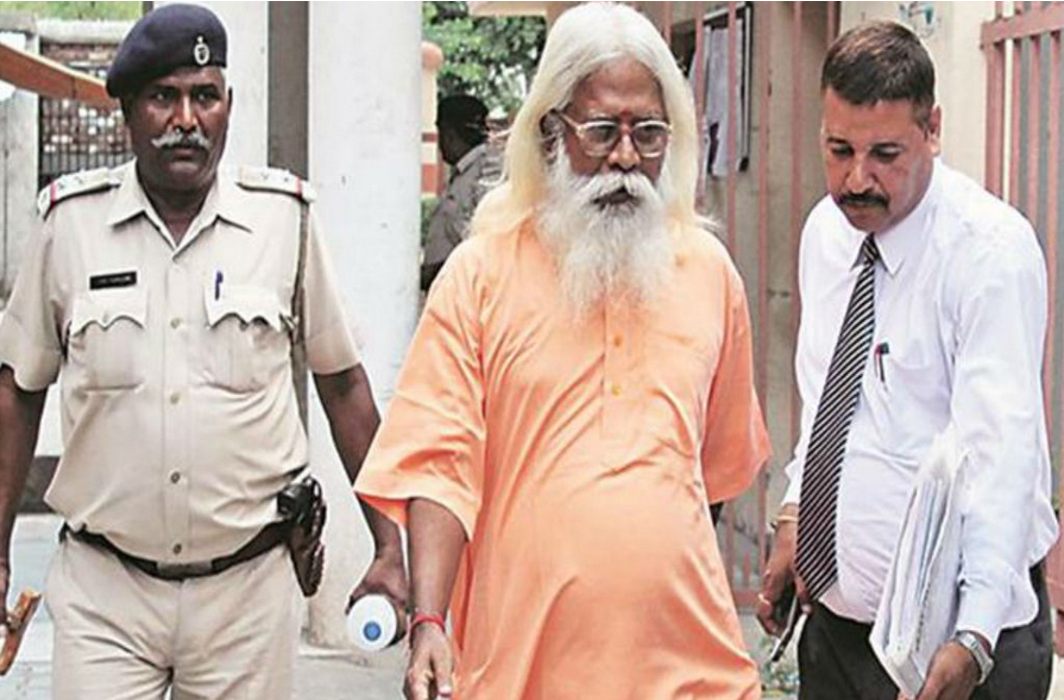 Eleven years after the Mecca Masjid blasts in Hyderabad that killed nine and wounded 58, a special NIA court on Monday, April 16, acquitted all five accused, including Swami Aseemanand and Devendra Gupta who has been convicted in Ajmer blast case, due to lack of clinching evidence.

After the fourth additional metropolitan sessions-cum-special court for NIA cases announced its judgement, defence advocate JP Sharma said, “The judge in his order observed that not a single allegation levelled by the prosecution could be proved, and hence he declared all the accused acquitted.”

“We will examine the court judgment after we get a copy of the same and decide further course of action,” an NIA official was quoted as saying by news agency ANI.

Meanwhile, police sounded an alert in Hyderabad following the judgement and beefed up security in the communally sensitive old city. More than 3,000 policemen and personnel of paramilitary forces were deployed.

There were protests in the city as many family members of victims wondered who is to be blamed for the blast, said a report in The Times of India (TOI). “Who killed our brothers and sisters? Will we ever come to know the truth?” Rahmat Ali, an elderly gentleman standing outside the packed courtroom was quoted by TOI as saying.

Soon after the blast on May 18, 2007, five more people were killed in subsequent police firing as cops tried to control a mob.

The high profile case was handed over to the CBI, which filed a charge sheet and later the National Investigation Agency (NIA) took over from the CBI in 2011.

Altogether, 10 persons owing allegiance to Hindu right-wing organisations were named as accused in the case.

But only five of them, Lokesh Sharma, Swami Aseemanand alias Naba Kumar Sarkar, Devendra Gupta, Bharat Mohanlal Rateshwar alias Bharat Bhai and Rajendra Chowdhary were arrested in the case. A court in Rajasthan sentenced Gupta and another convict to life in jail in March 2017 in the Ajmer Dargah blast case.

Sandeep V Dange and Ramchandra Kalsangra remain absconding so the verdict against them is pending.

Joshi was shot dead by three unidentified gunmen on December 29, 2007, near his house in Madhya Pradesh’s Dewas in during the course of the investigation.

The investigation against Tejram Parmar and Amith Chowhan is still continuing.

Aseemanand and Rateshwar are out on bail and three other accused are in Hyderabad’s central prison under judicial remand.

The NIA examined a total of 226 witnesses during the trial and as 411 documents were exhibited.

On May 18, 2007, a bomb blast occurred at the Mecca Masjid during Friday prayers resulting in the death of 8 persons and injuries to 58, while five others were shot dead by police in subsequent rioting. Two separate FIRs were registered at the Hussaini Alam police station regarding the blast as well as recovery of unexploded IED from Mecca Masjid against unknown persons.

The Hyderabad Police handled the probe initially and suspected Harkat-ul-Jihad-e-Islami (HuJI), a Pakistan-based terrorist group, to be behind the Mecca Masjid blast. More than 90 men – unofficial figures put it at more than 200 – were picked up for interrogation and 21 of them were charge-sheeted.

The police blamed Bilal, linked to HuJI, as the mastermind behind the terror attack. He was later killed in a shoot-out. After a prolonged trial, the Nampally criminal court acquitted all the accused on January 1, 2009, for lack of evidence.

The case was then transferred to the CBI. It filed a charge sheet against RSS pracharak Devender Gupta and property dealer and RSS activist Lokesh Sharma, who were part of the group led by former RSS pracharak Sunil Joshi.

The NIA took over the case from the CBI in 2011. All the cases involving alleged right-wing workers were handed over to the NIA, which filed a supplementary charge sheet against former RSS activist Swami Aseemanand in the case.

The NIA charged the accused persons of conspiracy to target Muslim places of worship to avenge bomb blasts and terror attacks against Hindus and temples by jihadi terrorists with cross-border support. The chargesheets stated that all of them planned between 2005 and 2007 to commit the acts including the bomb blast at Mecca Masjid.

The NIA relied heavily on the alleged confessional statement of Swami Aseemanand. The NIA stated that he was filled with remorse and desired to do ‘prayaschitha’ and therefore made a confessional statement under 164 CrPC before the Metropolitan Magistrate at Tis Hazari in New Delhi, in which he disclosed the conspiracy and execution of bombing of different places including Mecca Masjid. He subsequently retracted the statement saying that he was under duress to confess.

Aseemanand, who is the primary accused in a number of bomb blasts including Mecca Masjid, Ajmer, Samjhauta Express and Malegaon that occurred between 2005 and 2007, had walked out of Chanchalguda jail on April 1 after the NIA chose not to challenge the trial court order granting him bail on March 23.

Of the 230 witnesses examined by the prosecution 35 had turned hostile. One of the main witnesses to be declared hostile was Lt Colonel Shrikant Purohit, who was made a witness by NIA. On February 14 this year, he was declared hostile by the prosecution after he claimed that his statement was never recorded as a witness in connection with Mecca Masjid blast: neither by the CBI, which first investigated the case, nor by the NIA which took over the case in 2011. Purohit told the court that he knew Swami Aseemanand and others like Devendra Gupta and Sunil Joshi but only in the capacity as an intelligence officer of Indian Army who was trying to gather information. He denied meeting any of them ever. Lt Col is an accused in the September 29, 2008 bomb blasts at Malegaon, and is presently out on bail.

Doubts have been raised about the investigation and prosecution being influenced by political masters, the BJP and RSS.

Majlis-e-Ittehadul Muslimeen president Asaduddin Owaisi said justice has not been done and that it was a “malicious and biased” prosecution done by NIA.

“NIA did not deliberately pursue the case. When the accused got the bail, NIA did not appeal seeking cancellation of bail within the mandatory period of 90 days. This itself shows the prosecution was so biased,” the member of Parliament from Hyderabad said.

“I blame it entirely on the Narendra Modi government and NIA for failing to bring the accused to book and let the criminal off. It is a failure of the Modi government,” he said.

This, however, is not the first time such doubts have been cast. In June 2015, Rohini Salian, a senior Mumbai prosecutor had accused the Narendra Modi government of asking her to go soft on the group of Hindu extremists accused in the 2008 Malegaon blast case. Notably, some of them are also the accused in the Mecca Masjid blast case.

Salian had at the time said she had received verbal instructions from the NIA asking her to give the accused an easy ride. The investigative agency had, however, denied Salian’s allegations.

Apart from the Mecca Masjid blasts in 2007, the NIA was asked to probe six other such cases – blasts in Maharashtra’s Malegaon in 2006, the attack on Samjhauta Express in 2006, explosions at Ajmer Sharif in 2007, blasts at Malegaon and Modasa in 2008 and the murder of former Rashtriya Swayamsevak Sangh (RSS) pracharak Sunil Joshi.

Three cases — the Joshi murder, Modasa blast and Ajmer Sharif blast — have already been concluded. The Mecca Masjid blast case is the fourth among the Hindu terror cases where the trial has concluded.

Here is their status as of now, as reported by The Hindustan Times (HT):

Four blasts outside a mosque in Malegaon, a town in Maharashtra’s Nashik district, killed 38 people on September 8, 2006.

The Maharashtra anti-terrorism squad (ATS) and the Central Bureau of Investigation (CBI) charge-sheeted nine Muslims. The NIA took over the case in 2011 and filed a charge sheet against alleged Hindu extremists in the case paving the way for the release of the Muslims accused on bail. The trial is yet to begin.

Improvised explosive devices (IEDs) kept in the moving Samjhauta Express exploded near Dewana railway station in Haryana’s Panipat district on February 18, 2007. The explosion killed 68 people, most of whom were Pakistanis going back home on the train going to Lahore from Delhi.

The NIA has filed charges against Hindu extremists in the case. The trial is on.

A blast on October 11, 2007, during Ramzan at the Khwaja Moinuddin Chishti Dargah in Rajasthan’s Ajmer, killed three people and left around a dozen injured.Three more bombs were later recovered from the premises.

Of the 13 accused, three are absconding and another – Sunil Joshi — is dead. The trial against nine accused ended up in the conviction of only three — Sunil Joshi, Devendra Gupta and Bhavesh Patel. Seven accused, including Aseemanand, who was once termed as an alleged Hindu terror ideologue, have been acquitted. Gupta and Patel were sentenced to life imprisonment and imposed a fine of Rs 5,000 and Rs 10,000 respectively.

Joshi was shot dead on December 29, 2007, while walking back to his hideout at Chuna Khadan locality in Dewas, Madhya Pradesh. He was the leader of an alleged Hindu extremist group consisting of Pragya Singh Thakur, Lokesh Sharma, Sandeep Dange, Ramji Kalsangra, Rajendra Pehelwan, Dhan Singh, Amit Chauhan and Aseemanand. Besides Aseemanand, many others helped Joshi fund his group.

According to the NIA probe, the group was behind most of the right-wing terror cases.

After completing the investigation in the Joshi murder case, the NIA handed over the case to the Madhya Pradesh police saying it had not found any evidence to suggest that his murder was linked to the larger Hindu terror conspiracy.

The agency alleged that Joshi was killed by his own men as they were unhappy over his alleged ‘misbehaviour’ with another accused Pragya Singh Thakur. The trial ended on February 1, 2017, and all the eight accused, including Pragya Singh Thakur, were acquitted.

Twin blasts in Maharashtra’s Malegaon and Modasa in Gujarat took place on September 29, 2008, during Ramzan and a day ahead of Hindu festival of Shivratri. Improvised Explosive Devices mounted on motorcycles were planted at both locations killing eight people.

The Maharashtra Police’s Anti-Terrorism Squad said it had cracked the Malegaon case and Pragya Singh Thakur and a serving Indian Army official Prasad Srikant Purohit were arrested and charge-sheeted in the case.

The NIA later dropped charges against Pragya Singh Thakur and the special court is yet to take a call on it. The Modasa blast case was closed by NIA citing lack of evidence.