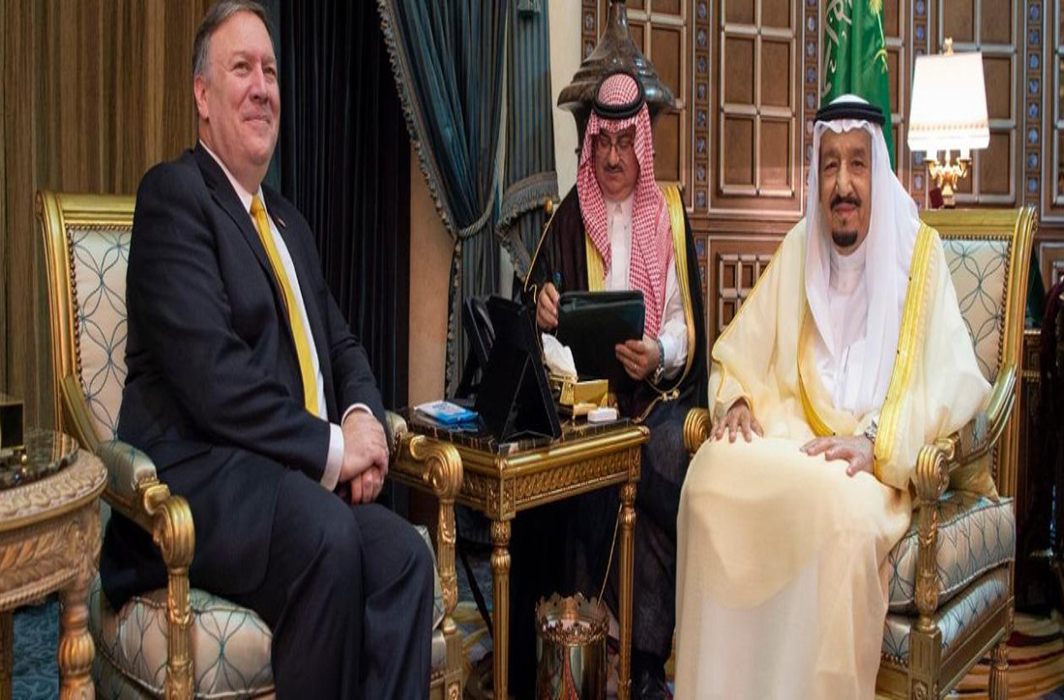 US President Donald Trump’s priority for Saudi Arabia was once again expressed when his new Secretary of State Mike Pompeo chose to visit the Kingdom on Saturday. Trump himself took US Air Force One to Riyadh for his maiden trip out of the country in May last year.

Pompeo arrived in Riyadh on a hastily-arranged visit to the Middle East as the US aims to muster support for new proposed sanctions against Iran before Trump takes the final call on nuclear deal on May 12.

According to Saudi Arabia’s Al-Arabia TV network, Saudi Arabian foreign minister Adel al-Jubeir, while addressing joint press conference with his US counterpart, stressed on Sunday in Riyadh, on the need to impose further sanctions on Iran.

He pointed out Iran’s successive violations and support to Houthi missiles fired from Yemen towards Saudi Arabia. He was quoted saying, “We support Trump’s policy toward Iran, especially with regard to the nuclear agreement.”

On his part Secretary of State Mike Pompeo stressed that the Saudi Arabia’s security is a priority for the US and added that Iran was the largest state sponsor of terrorism, Al-Arabia reports.

Earlier in the day, King Salman bin Abdulaziz received Mike Pompeo at his palace and reviewed bilateral relations, and latest developments in the Middle East.

After Riyadh, US Secretary of State is visiting Israel and Jordan, the other close allies in the region.  The Middle East visit came just two days after Pompeo was sworn-in as the Secretary of State.  President Donald Trump is set to decide whether to pull out of the 2015 nuclear deal also known as JCPOA with Iran that is still supported other UNSC permanent members and Germany.

Brian Hook, a senior policy advisor travelling with Pompeo told reporters, “We are urging nations around the world to sanction any individuals and entities associated with Iran’s missile program, and it has also been a big part of discussions with Europeans.”

He referred to the ballistic missiles fired into Saudi Arabia by Yemen’s Houthi Ansarullah movement killing a man earlier on Saturday. He said that Iran supports Yemen’s Houthis. “Iran’s missiles prolong war and suffering in the Middle East, they threaten our security and economic interests and they especially threaten Saudi Arabia and Israel,” he said.

The senior US officials said that Saudi Arabia blame Iran for smuggling the missiles into Yemen.

Meanwhile Aljazeera reports that US Secretary of State is imploring Saudi Arabia to end the blockade against Qatar, which has been led by Riyadh since June 2017. UAE, Bahrain and Egypt had also cut diplomatic, trade and travel ties with Qatar along with Saudi Arabia.

Pompeo was sqorn in as top US diplomat on Thursday and flew to Brussels for a visit to NATO for a full day job. On Saturday, he began his Middle East tour.

New York Times reports that Mike Pompeo, the former CIA chief, has also asked Saudi Arabia to allow humanitarian and commercial goods into Yemen. He will fly to Israel on Sunday night and will visit Amman, the Jordanian capital afterwards.