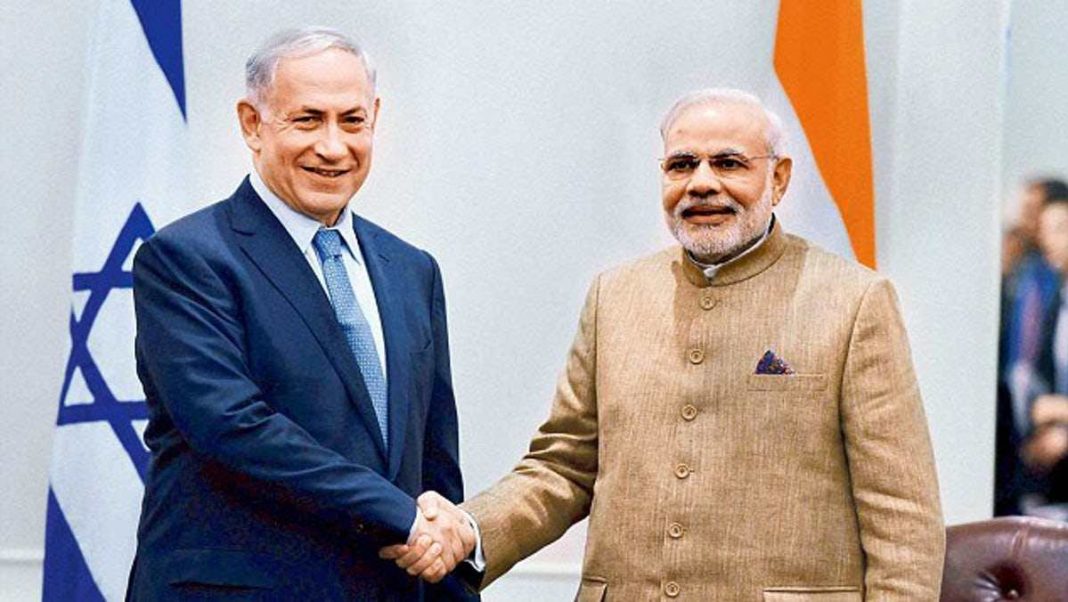 Netanyahu will be with Modi almost throughout the visit, says Israeli envoy

Next week Prime Minister Narendra Modi will create history by visiting Israel, first by any Indian Prime Minister since its creation in 1948. He will have detailed discussion with his Israeli counterpart Benjamin Netanyahu on all matters of mutual interest and call on President Reuven Revlin.

He will also be the first Indian dignitary skipping a visit to Palestine while visiting Israel. Traditionally most foreign dignitaries visit both sides of the rival territories.

PM’s visit, coinciding with the completion of 25 years of diplomatic relations between the two countries, will provide an impetus to bilateral engagement, sources in Ministry of External Affairs said. India and Israel established diplomatic ties in 1992.

Daniel Carmon, Israeli Ambassador to India, while speaking to an Indian journalist on Wednesday, said that PM’s visit is being accorded considerable importance by the Israeli government. Netanyahu will be at Modi’s side for almost the whole of two and a half day visit.  Some 40 to 50 Israeli dignitaries will receive him at the airport, an honor accorded only to Pope and the US President, he added.

The Israeli cabinet on Sunday passed a resolution outlining a strategic partnership with India in a host of non-security areas, such as water, agriculture, space, health, investment and even bringing Bollywood to Israel. The Israeli government has sanctioned 70 million dollars to facilitate the partnership.

Before the beginning of cabinet meeting Benjamin Netanyahu was quoted as saying, “In the 70 years of the country’s existence no Indian Prime Minister has ever visited and this is further expression of Israel’s strength.”

One of his official tweets said: “This is a very significant step in strengthening relations between the two countries. Ties between Israel & India are on a constant upswing.”

Among the most important deals expected to be signed during PM’s visit include 1.5 billion dollars agreement for buying Spike anti-tank missiles for the Indian army and Barak-8 air defense missiles for the Navy.  Recently Israel Aerospace Industries had announced a two billion mega missile pact that will give Indian forces an advanced defense system of medium range surface to air missiles. It was considered to be Israel’s biggest defense contract.

India is the largest buyer of Israeli military equipment, while Israel is India’s largest customer after Russia.

The Israeli enthusiasm of welcoming Modi was indicated by Israeli PM Benjamin Netanyahu through a series of his tweets on June 25, three days before formal announcement by New Delhi.

Next week, the Indian Prime Minister, my friend, @NarendraModi will arrive in Israel, This is an historic visit to Israel.

Prime Minister Narendra Modi will arrive in Tel Aviv in the afternoon of July 4. On the first day of his trip, PM is slated to tour Yad Vashem, a Holocaust memorial and an agricultural innovation center.

On July 5 PM will meet Prime Minsiter Bejnamin Netanyahu and President  Reuven Rivlin. He will also meet Indian Diaspora. About 80,000 Indian Jews live in Israel.  On July 6, Modi will pay homage to Indian soldiers killed in 1918 Haifa battle and will host a forum of thirty leading CEOs of Israeli companies.

According to analysis published in Haaretz, an Israeli newspaper, “Modi, a Hindu nationalist, conservative and believer in free markets, enjoys unprecedented popularity at home, and may say he is all but destined to be reelected in 2019.”

It further introduces India to its readers saying, “India had traditionally been part of the non-aligned bloc of nations and closer to the Soviet Union than US and a firm supporter of the Palestinians.”

The Israeli daily further says, “Indians are fond of pointing out that between Bangladesh and Marrakesh (Morocco), India and Israel are only two non-Muslim states and two democracies. Notably, Modi’s two day visit next week does not include a trip to the Palestinian Authority headquarters in Ramallah.”

The daily also said, “Israel is undertaking a campaign to lure Bollywood producers to film in Israel, and to bring more Indian tourists to Israel. Some 20 million Indians travel abroad every year, but only 45,000 visit our shores.”

However, President was “advised” not to visit Al-Aqsa mosque, the third most sacred site for Muslims. Indian computers, supposed to be gifted by the President to the Palestinian University, were also denied customs clearance by Israeli authorities.