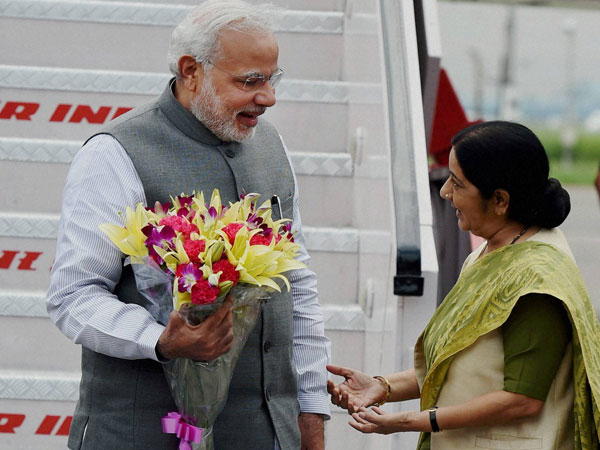 Carries forward India’s ties with US, Portugal and Netherlands

Prime Minister Narendra Modi returned Wednesday morning after a successful three-nation tour to Portugal, the US and Netherlands. His US visit was considered to be remarkable when PM could elevate country’s ties to “Major Defense Partner” status with Washington. Trump called him a “true friend”.

Prime Minister was received by External Affairs Minister Sushma Swaraj at the airport. Modi left for three nation tour in the morning of June 24.

In the first leg of his visit he reached Lisbon, Portugal, and held talks with his counterpart Antonio Costa on June 24. During his two day visit to US on June 25 and 26, Prime Minister held detailed meetings with President Donald Trump at White House. He met the CEOs of American companies and addressed Indian diaspora.  On his return journey Prime Minister visited Amsterdam Netherlands on June 27.

In Portugal PM held talks with his counterpart Antonio Costa, who called it an excellent opportunity to review the implementation of the accords agreed during his India visit in January this year. The two leaders built on their earlier discussions and review the progress of various joint initiatives and decisions.

According to a press statement, Modi underlined the historical connections and strong economic and people to people ties between the two countries. This was the first bilateral visit of Indian Prime Minister to that country. It was the second summit between the two countries within six months. The Dutch Prime Minister visited India in January for a bilateral visit and was also the Chief Guest at Pravasi Bharatiya Diwas. Modi said that PM Costa represents the best of Indian Diaspora across the world.

On his return journey from the US, the PM visited Amsterdam, Netherlands. He met Dutch counterpart Mark Rutte and discussed important global issues, including counter-terrorism and climate change. He also called on King Willem Alexander. Modi also met CEO’s of major Dutch companies and held meeting with Indians living in that country.